The world's states should commit to a legally binding emissions cut of 60% by 2050, with five-yearly reviews, in a Paris Protocol to replace the moribund Kyoto agreement at a climate summit later this year, according to a leaked EU document.

Matt Sexton has left his position as director of corporate social responsibility (CSR) at B&Q, following a restructuring of the DIY chain's sustainability division. 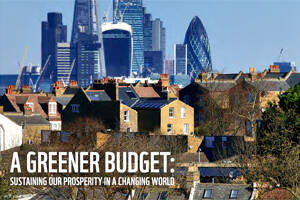 WWF: A Greener Budget: Sustaining our prosperity in a changing world

WWF is at the heart of global efforts to address the world's most important environmental challenges. It works with governments, businesses and communities to promote sustainable patterns of development so that both people and nature can thrive.

The Climate Knowledge and Innovation Community (Climate-KIC) has launched three new funding projects and competitions to support low-carbon innovations and cleantech business ideas from across Europe.

The UK Government is putting £10m towards innovation in battery design to fund the development of a new high-voltage battery pack for the next generation of ultra-low emission vehicles (ULEVs).

The manufacturers' organisation EEF has welcomed a parliamentary report which criticises Ofgem for allowing the operators of Britain energy networks to make "greater than expected profit".

The UK Green Investment Bank (GIB) is one of three investors funding a first-of-its-kind £111m recycling and waste facility in Scotland.