A Plastic Planet: Businesses must do more than recycle to stay relevant

EXCLUSIVE: In an era of unprecedented consumer demand for plastic-free packaging and products, companies making their offerings recyclable are no longer doing enough - they must radically transform their business models to stay relevant and retain consumer trust. 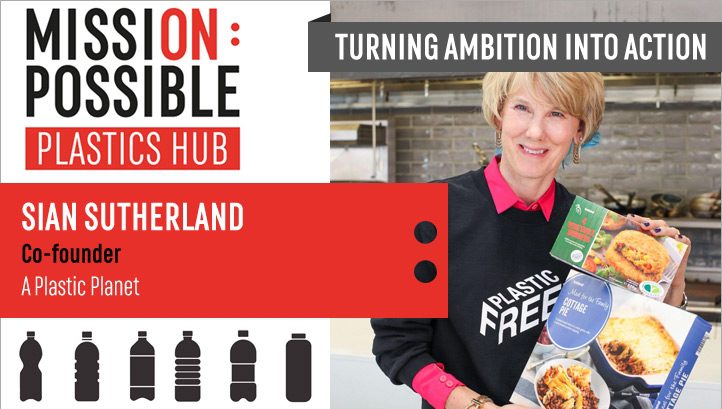 Sutherland argued that firms would need to champion whole-systems circularity

That is according to plastic activist and entrepreneur Sian Sutherland, who co-founded NGO A Plastic Planet in 2017 after realising that her skincare brand, Mio, was contributing to the 120 billion pieces of plastic packaging produced every year by the global cosmetics and toiletries sectors.

The organisation campaigns against what it calls the “misuse” of plastic by the food and drink industry, which is estimated to account for 40% of all plastic packaging units sent to landfill or incineration globally. To date, it has garnered support from the likes of Environment Secretary Michael Gove and Prime Minister Theresa May.

Since its launch, A Plastic Planet has helped to launch the world’s first plastic-free supermarket aisle in the Netherlands and the UK’s first plastic-free convenience store in North London. These achievements required shop owners to think outside the box in terms of packaging, seeking innovations that could help them house perishable products like bacon and cheese without reducing their shelf life.

Speaking exclusively to edie, Sutherland explained that she hoped these schemes would serve as “symbolic projects”, proving to big-name businesses that they could align profitability with a switch to plastic-free packaging.

“Retailers – supermarkets especially – are there to give us value and choice,” Sutherland said.

“If being able to shop plastic-free is not being made as easy as shopping wheat-free, meat-free or gluten-free, they’ve missed the point. We can only buy what we are sold, so if we can make plastic action work for business, then things will change faster.”

With dozens of retailers making new commitments to reduce their use of virgin plastic in recent times, Sutherland added that those wishing to be seen as leaders in the war on plastic would need to make more ambitious public pledges in 2019.

“People have such a love for brands which are honest, ambitious and transparent, so the next generation of companies already know that sustainability is no longer a little ‘nice-to-have’,” she explained. “It is an absolute necessity that needs to be at the heart of any company.”

Sutherland’s comments come off the back of several pieces of research revealing that sustainable packaging has become a key differentiator for customers in the wake of the BBC’s Blue Planet 2 series.

Packaging industry body Pro Carton’s recent survey of 7,000 consumers, for example, found that 92% would prefer to buy a plastic-free unit of their favourite product than one housed in plastic, with more than one-third (36%) having already begun boycotting certain brands over packaging sustainability concerns. This rises to more than one-half (56%) among millennials, who will make up three-quarters of Britain’s workforce by 2030.

Similarly, a joint survey by waste management firm Veolia and not-for-profit RECOUP found that consumer demand for recycled packaging has begun to outpace corporate action, with the demand being led by younger generations.

In order for any business to stand out as a leader amongst all of the “noise” from the media, consumers and policymakers around the plastic phase-out, Sutherland argued that firms would need to champion whole-systems circularity, considering the resource efficiency of all products at every stage, from design to end-of-life.

Specifically, she claimed that businesses pledging to make all their packaging or products recyclable – either through redesign or through investment in the waste management sector – are no longer showing enough ambition to retain consumer loyalty and investor attention.

“Businesses need to make big moves in terms of circularity and begin at the design stage, because they’ll soon be responsible not just for the product’s first life, but its second, third and fourth lives; creating such a value in the products that they will want to get them back,” Sutherland said.

“The amount of infrastructure needed to recycle the amount of plastic we produce is never going to pop up overnight and, globally, we’ve only recycled 9% of all plastic ever made. It’s a material that’s only ever downcycled, so why do some businesses think we can simply recycle our way out of the problem?”

Sutherland’s comments come at a turbulent time for the global waste management industry. Since China confirmed last January that it would stop accepting 24 types of plastic waste, the UK’s Government and business community have faced pressure from consumers and campaigners to reduce their waste exports.

Countries such as Malaysia, Vietnam and Poland were initially touted as alternatives, but have since implemented import restrictions, exacerbating backlash. In response to the issue, the Government has upped the amount of recyclable waste it exports to developing nations in East Africa and South East Asia, while businesses like Danone and Princes have begun recycling more of their packaging within the UK.

“Action needs to go deeper than it ever has before because the public now knows about the plastic disaster that we have caused and that recycling alone isn’t going to be the answer,” Sutherland added.

“They are demanding that the plastic tap is turned off at the source.”

In addition to making the shift away from linear business models to a cradle-to-cradle framework, Sutherland is encouraging businesses to foster plastic-related discussions outside of their usual audience this year – and to move the conversation past “token” items such as straws to more wide-reaching changes.

“At the moment, we all feel a bit safe and cosy because we are talking with like-minded people who care – which has no impact at all,” she explained.

“We can’t keep going to ocean conferences and raise awareness of the issue among people who already know what we’re about to say. The big question now is how we can empower the public and ignite businesses to change from within.”

Sustainability professionals seeking more insight on how best to reducing or eliminate single-use plastics can tune in to edie’s free webinar, entitled ‘Single-use plastics: How to lead a business transformation’, on Thursday (17 January) at 2pm.

Featuring expert speakers from A Plastic Planet, Sky and Cranswick, the hour-long session will combine best-practice case studies with expert insights to give you a clear way forward in your organisation’s approach to plastics.