Ryanair and British Airways have this week provided updates on their plans to increase the use of sustainable aviation fuels (SAFs), while the UK Government has launched a new ‘Zero Emission Flight Delivery Group’ tasked with accelerating the development of hydrogen and electric planes. 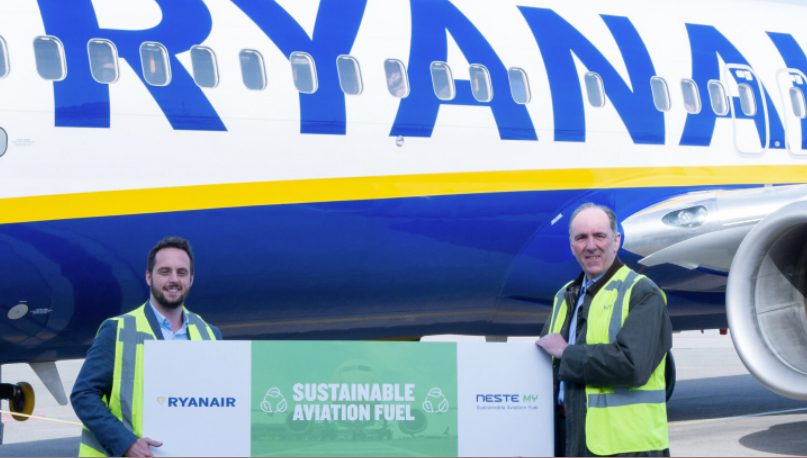 The UK Government’s new Delivery Group was launched on Wednesday (20 April) at the fifth meeting of its Jet Zero Council – an initiative set up to enable the Government to collaborate with the private sector and academia to coordinate the net-zero transition for aviation.

Since the formation of the Jet Zero Council last year, the Government has committed, through the Transport Decarbonisation Plan, to reaching net-zero for airport operations and domestic flights by 2040. A 2050 net-zero deadline has been set for international flights. The Government continually been accused by green groups of failing to properly assess the role that hydrogen and electric aircraft will play in delivering these ambitions, having followed industry advice to prioritise SAFs and efficiencies over zero-emission aircraft in the short and medium-term.

The new Zero Emission Flight Delivery Group will be tasked with assessing the role of electric and hydrogen aircraft, and providing advice to policymakers and the private sector on scaling these technologies accordingly. It will sit under the Jet Zero Council, which is jointly chaired by Business Secretary Kwasi Kwarteng and Transport Secretary Grant Shapps.

The Connected Places Catapult’s chief executive officer, Rachel Gardner-Poole, has been selected to lead the new Delivery Group. Gardner-Poole has worked for more than 20 years in the UK’s aviation and technology space, having previously held roles at organisations including the Civil Aviation Authority.

“I am passionate about using innovation and technology to create a positive impact on our planet and look forward to collectively addressing the challenges and opportunities that lie ahead of us,” Gardner-Poole said.

In related news, Ryanair has signed an agreement with Neste to source SAF made using used cooking oil. The SAF will be used in blends with traditional jet fuel, comprising a 40:60 mix, for around one-third of the flights that Ryanair operates from Amsterdam Schipol Airport each year. The first blends using the fuel will be used by Ryanair this month.

Current international regulations restrict SAF blends in commercial flight fuel mixes to a maximum of 50:50, hence why the 40:60 blend has been chosen. Ryanair is forecasting a 60% reduction in emissions from each flight using the 40:60 blend.

Ryanair is notably aiming to operate 12.5% of its flights using SAF by 2030. It is unclear whether this commitment means that the airline is seeking to meet 12.5% of its fuel use with SAF this decade, or to use some sort of SAF blend on 12.5% of flights. edie has contacted the airline for clarification.

This SAF pledge forms part of an overarching plan to reach carbon neutrality by 2050, published by Ryanair last month. Ryanair is planning to use SAFs to address 34% of absolute emissions from flights by 2050 under this plan, which makes no mention of hydrogen or electric planes.

“SAF is a key element in achieving aviation’s emission reduction goals,” said Neste’s vice president for Europe, Jonathan Wood. “The aviation sector is now at a tipping point as demand increases, and policy proposals are on the table in the EU and UK to promote demand and supply of SAF.”

At present, the EU is proposing a mandatory requirement for fuel suppliers to airports to use SAF blends as standard. It has put forward the proposal of a 2% SAF blend in the first instance, gradually increasing to 63% through to 2050.

The UK Government is also mulling a SAF mandate. Its proposals involve requirements for jet fuel producers to ensure that at least 10% of their production annually is SAF by 2030, rising to 75% by 2050.

Elsewhere, British Airways has extended its deal with Velocys – a producer of SAFs – by one year. The deal was signed in May 2020 and will now run through to spring 2023. Under the deal, BA and Velocys are jointly developing a facility in the Humber region that will convert waste into jet fuel.

Following a string of delays, the project is expected to enter the construction phase in 2024 and to enter full-scale commercial operation in 2027, instead of 2025 as originally planned.