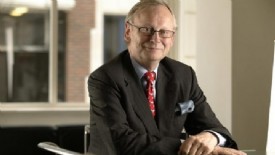 The Rt Hon. John Gummer, Lord Deben served for sixteen years as a British minister in the governments of Margaret Thatcher and John Major, as Employment Minister, Paymaster General in HM Treasury, Minister for London and Minister for Agriculture, Fisheries and Food, before moving in 1992 to the Department of the Environment. As Secretary of State for the Environment, the NGO community called him “the best Environment Secretary we ever had”. John went into government from business, where he had first been a publisher and then chairman of a medium sized public company, specializing in distribution and communication resources; in 1997 he returned to his business roots, founding Sancroft to advise companies on their corporate responsibility strategy. In addition to his role at Sancroft, John is also Chairman of the UK Government’s Committee on Climate Change.

@lorddeben More from this blogger Create your own blog

edie at 20: Despite the idiocy that is Brexit, we can do it


The people who believed that the earth was flat hung on for years to their beliefs despite mounting evidence and overwhelming acceptance of a round globe by the scientific world. Ingenious and ever more far-fetched explanations were invented to discount the navigational reports and the astronomical calculations that proved the scientific point.

The flat-earthers simply couldn't bear to be wrong. In an exact parallel, the climate nay-sayers are still around. However, although given occasional credence by the BBC and a few contrarian journalists, their direct influence is now found only in the US. Their lasting impact here is that they have spawned the self-styled luke-warmers who present a very English compromise - admitting that global warming is happening but suggesting it's not as bad as the scientists make out. They paint the scientific mainstream as alarmist and seek to muddy the waters by suggesting that so much is still in doubt that we should not take extensive measures now to deal with the threat but delay until we have greater certainty.

This is, of course, a convenient stance that avoids hard decisions or long-term commitments. It relies on a limited acquaintance with the facts and the propensity for the cultured and comfortable to eschew enthusiasm, confuse moderation and indifference, and thus act as a drag on the urgent action which reality increasingly demands. Without the institutional continuum created by the Climate Change Act, these would have been the people who dictated the pace of Britain’s response to global warming. Instead for ten years, Governments of all hues have maintained a fixity of policy which is unique in our post-war history. Five carbon budgets have been set by the independent Climate Change Committee (CCC) and all five have been accepted by Parliament without amendment.

We have therefore a programme reaching forward to 2032 which is statutorily enforceable and that cannot be changed unless the CCC say such a change is necessary. This year we start to formulate the 6th carbon budget. All this gives unprecedented certainty to business and civil society and is a format which is increasingly copied in other countries. With the Paris Accord coming into force, there is no doubt of the direction of travel for the UK and the wider world. Of course, there will be ups and downs. Countries will over promise and under deliver. The necessary ratcheting mechanism will not be easy to enforce and the measurement of success will always be contested. Yet, overall we can now say that humanity is on a journey to save ourselves and our planet from the disaster we had almost made inevitable.

And it is essential that we recognise just how momentous have been the steps we have already taken. It is so easy to recognise the failures and bemoan the backsliding and that disillusion can be just as powerful a stop to action as the luke-warmers with their ‘better not yet’ philosophy. Who would have believed ten years ago that Britain would be well on the way to the decarbonisation of our electricity generation, that a Chancellor would have allowed £7.6bn to be spent to do it, and that we now have the most successful offshore wind industry in the world? Who would have dared hope that Britain in Europe would have led the world to Kyoto and then on to the Paris Agreement? Indeed who would have forecast the ground-breaking extent of Paris and the almost universal support it has engendered?

So we know we can do it! Despite the idiocy that is Brexit we can do it! We also know it won't be easy and that the luke-warmers will continue to advise caution and find reasons for delay. Yet time is of the essence as recent weather patterns remind. Almost all the hottest years in recorded history have occurred since 2000. No one incidence can be put down to climate change but the pattern is unmistakable evidence. A single UK example will suffice. In Brogdale in Kent, we hold the nation’s apple collection. 2100 different apple cultivars presided over by the University of Reading.

They have detailed records since 1960 which make frightening reading. Not only has the mean temperature risen by one degree in less than 60 years but, as a whole, the orchards bud 17 days earlier. ‘The time is out of joint’, There is an increasing danger that pollinators will emerge too late for the flowers that depend upon them. Already the winters are often too mild to kill the pests and diseases which so easily devastate our crops. That’s with one degree and here in the UK - perhaps the most fortunately placed country in the world. Double that and apply it to countries already more exposed and the disastrous effects of climate change within a few years become increasingly clear.

There is no time to lose. That’s why the Climate Change Committee was so clear in its annual advice to Government. We are not going fast enough. We have to transform our car fleet, not in 2040 but closer to 2030; we have to raise our house building standards now and not, as Mrs May encouragingly proposed by 2030; we must institute a major effort on energy efficiency for our current  housing stock; and we need to use farm payments reform to drive far-reaching agricultural action to reduce emissions.

The programme is clear and without it, we will not reach the 4th and 5th Carbon budgets which are legally binding. The good news is that it can be done and done without damaging our economy which has grown over 70% while our emissions have fallen by 40%. These measures will create jobs and growth, not stifle them. But climate change won't wait at our convenience. The luke-warmers are as wrong as the deniers. There is no time to lose if we are going to succeed in the war to stop and ultimately reverse global warming.