Boeing Co has unveiled plans to deliver commercial aircraft capable of using 100% biofuel by 2030. Using existing technologies under current regulations, it can only use biofuel blends of up to 50%. 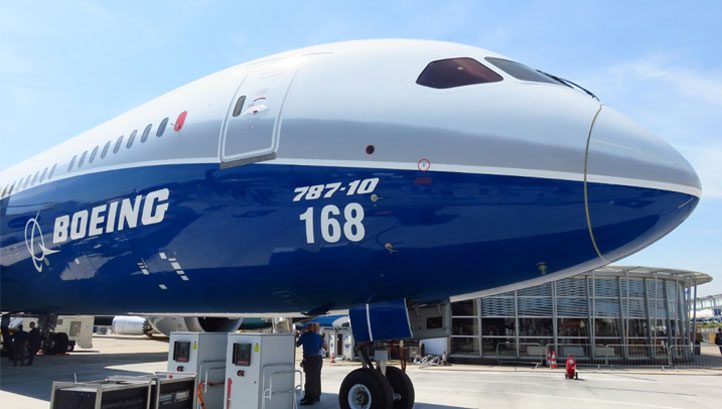 In a statement released late last week, the US-based plane manufacturer said that changes will need to happen across the fields of jet system engineering and global regulation for the new innovation vision to be realised.

On the former, there are currently no jet systems capable of being fuelled by 100% biofuel that are both large enough to support a commercial aircraft and cost-competitive with traditional systems. On the latter, current international fuel specifications permit blends of up to 50% biofuel, with the rest being conventional, fossil-based jet fuel.

Boeing has already completed one commercial plight using 100% biofuel. It used a FedEx 777 Freighter to deliver the pilot project in 2018.

To scale up the technology, it will also need to firm up plans for biofuel sourcing. Potential derivatives include vegetable oil, sugar cane and domestic waste. Each potential source comes with its own safety considerations – and with considerations around the environmental sustainability of the supply chain. Vegetable oil and sugar cane, for example, if unsustainably produced, could exacerbate existing land use issues such as biodiversity loss, soil erosion and food security.

Speaking to Reuters, Boeing’s director of sustainability strategy Sean Newsum said the biofuel planes will help the firm achieve its commitment to halve emissions by 20205. The commitment has been made by all other major global plane makers. Notably, Boeing planes due to enter serve should still be operating through to the early 2050s.

Newsum told reporters that reducing emissions to help tackle climate change is “a tremendous challenge; the challenge of a lifetime”.

Aside from alternative fuels, Boeing is planning to reduce the weight and drag of new aircraft to reduce fuel consumption and, by extension, emissions.

The firm seems to see hydrogen fuels and electric aircraft playing a smaller role in its strategy than some others in the sector. Airbus, for example, is striving to operate commercial hydrogen flights by 2035 and has already unveiled three potential aircraft designs.

The Airspace of the Future

The announcement from Boeing came shortly after Shell pulled out of a joint venture to develop a low-carbon aviation fuel plant in the UK. Spearheaded by fuel developer Velocys, the waste-to-jet-fuel plant was granted planning permission last year and is also being backed by British Airways.

Shell said in a statement that it was exiting the project after agreeing to jointly fund another plant in Canada, which developers claim could produce more than double the fuel using less than half the waste. Velocys had been hoping to begin construction in 2022 and production in 2025, but Shell’s departure could leave a funding gap.

Boeing’s news also came shortly after nine UK-based organisations formed a new ‘Aerospace of the Future’ Consortium in response to the Government’s Industrial Strategy. Under the Strategy, UK Research & Innovation (UKRI)  has been supporting businesses to develop technologies, processes and systems to decarbonise and modernise aviation.

Collectively, these organisations will explore emerging technologies like freight-carrying drones, urban air vehicles and hybrid-electric regional aircraft. They will also accelerate the deployment of interim solutions – planes which are quieter, lighter and lower-emission.

UKRI has allocated £125m from the Industrial Strategy Challenge Fund to support the new consortium. This figure is expected to be more than matched by industry contributions.

“At this very challenging time for the international aviation industry, it is a great testament to the UK’s drive and ambition that we have had such a strong response to the first funded Future Flight competition,” UKRI’s challenge director for Future Flight, Gary Cutts, said. “The breadth, quality and creativity of the bids have been exceptional and the economic and social benefits offered are very significant. The projects we are now launching will position the UK strongly to drive the third revolution in aviation.”