‘Build Back Greener’: Boris Johnson vows that UK will host 40GW of offshore wind by 2030

Prime Minister Boris Johnson has plans for every home in the UK to be powered with electricity from offshore wind farms within the decade and has unveiled a £160m pot to support the sector. 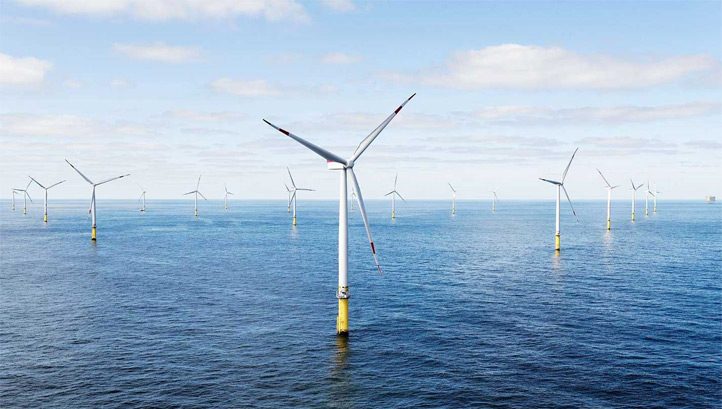 The Conservative Party conference is being held virtually this week, with Johnson expected to address attendees around his plans for a “green” recovery from the economic fallout of Covid-19 later today (6 October).

He will confirm that the Government has increased its 2030 target for installed offshore wind capacity from 30GW to 40GW, in a drive to help meet the UK’s long-term climate targets and to create “thousands of jobs” in the energy sector.

A £160m package for companies manufacturing the “next generation” of offshore wind turbines will be unveiled as a first step. Manufacturers in Teeside, Humber, Scotland and Wales will benefit from the pot.

Downing Street told media outlets that this initial investment will create around 2,000 jobs in manufacturing and construction in the coming months. Such roles should be appealing to those in the oil and gas sector left redundant amid falling demand during the pandemic.

“I remember how some people used to sneer at wind power 20 years ago and say that it wouldn’t pull the skin off a rice pudding,” Johnson will say, mocking his own historic opinions and those of other Conservatives.

“As Saudi Arabia is to oil, the UK is to wind – a place of almost limitless resource, but in the case of wind without the carbon emissions and without the damage to the environment,” he will add.

Over the coming weeks, Johnson is set to announce nine more policy and/or funding packages for low-carbon sectors, as part of what Downing Street has called a ten-point plan to “build back greener”.

The Financial Times has reported that the plan will also cover hydrogen production and infrastructure; carbon capture and storage (CCS); low-carbon synthetic fuels for aviation and small modular reactors. On the latter, the Conservative Party has pledged to create a nuclear fusion facility by 2040.

Solar and onshore wind appear to be absent from the plan.

Responding to the offshore wind announcements, NUS President and Build Back Better campaign activist Zamzam Ibrahim said the government must do more than “rehashing old commitments and dressing them up as shiny new announcements”.

“If the UK is to be a true global leader and bring about a green industrial revolution, we need to see a massive increase in investment in clean industries, a green jobs guarantee to tackle the looming unemployment crisis, and a commitment to hit net zero well before 2050,” Ibrahim said. The Build Back Better campaign ultimately wants the UK to adopt a Green New Deal.

The Aldersgate Group’s executive director Nick Molho would also like to see the measures bolstered. He said: “To deliver this target in a timely and economically beneficial way, the Government must provide the sector with sufficiently ambitious, regular and predictable project auctions throughout the 2020s.

“The much-needed commitment to invest in port infrastructure is a welcome commitment and should be matched by a clear focus on low carbon skills, both of which are essential to grow domestic supply chains and create jobs in the sector.”

At a virtual event on Monday (5 October), Molho notably launched the Group’s latest policy paper on net-zero. The report warns that the UK’s current policy provisions do not put the nation on a “credible pathway to building a competitive, net-zero emissions economy”. It notes that “urgent decisions” must be made in the early 2020s if the national 2050 target is to be met, urging Ministers to embed these decisions in departmental efforts to contribute to Covid-19 recovery plans.