Theresa Villiers last night (24 July) returned to Government by taking over from Michael Gove as UK Environment Secretary, as part of a radical change of cabinet from new Prime Minister Boris Johnson. 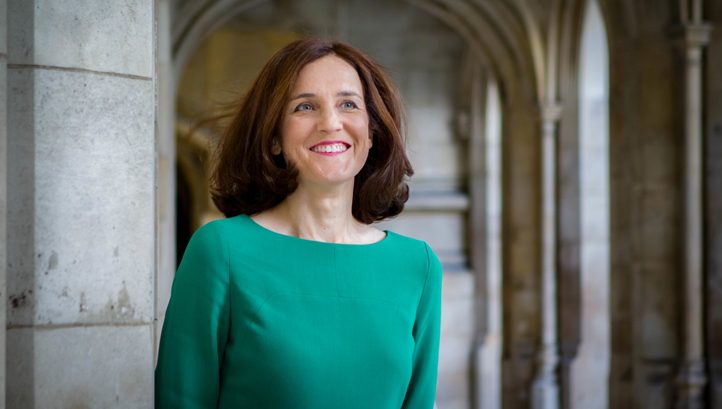 Theresa Villiers appears to be an advocate for climate action

Following a largely successful 18-month stint at Defra, Gove has taken up the role of Chancellor of the Duchy of Lancaster, which is seen as a promotion for the Surrey Heath MP.

Meanwhile, arch Brexiter Villiers steps into the Department having previously been Secretary of State for Northern Ireland and a minister in the Department for Transport.

The Rt Hon Theresa Villiers has been appointed Secretary of State for Environment, Food and Rural Affairs @DefraGovUK pic.twitter.com/p2DMHWkyzJ

Villiers, who has argued for a ‘no deal’ Brexit — which many believe could have damaging consequences for UK green policy — has a somewhat mixed environmental track record.

Villiers has also endorsed specific environmental projects, including the low-carbon lifestyle project, One Home. Commenting on that project, Villiers said: “Many of us find it hard to switch to greener more sustainable lifestyles and One Home provides some really useful guidance on how to play a part in tackling climate change in a way which is practical and affordable.”

As Chancellor of the Duchy of Lancaster, Gove’s responsibilities will include managing an investment portfolio of land, property and financial investments, and advising Johnson on developing and implementing Government policy. The job will also take Gove close to the Brexit negotiations, having been a key figure in the Vote Leave campaign.

However, Gove was not given the role of First Secretary of State  referred to as Deputy Prime Minister — as that job went to new Foreign Secretary Dominic Raab.

The Rt Hon Michael Gove @michaelgove has been appointed Chancellor of the Duchy of Lancaster @cabinetofficeuk pic.twitter.com/F0WMudtRBR

As one of the driving forces of the Brexit campaign, Gove replaced former Andrea Leadsom as Defra Secretary in June 2017. Green groups were initially cautious of Gove’s appointment as he had reportedly attempted to remove climate change issues from the school curriculum during a previous stint as Education Secretary.

In November 2018, Gove reportedly turned down the Brexit Secretary role to remain on in Defra. Weeks later, he stated he was “very glad” that he had stayed on at Defra in favour of the Brexit Secretary job. Asked how committed he remained as Environment Secretary, Gove said he would carry on “for as long as I can be useful” to the Department.

Having led the delivery of Defra’s 25-Year Environment Plan, Gove has been a central figure in the Government’s plan to eliminate avoidable plastic waste. He notably spearheaded a cross-party movement to phase-out single-use plastics as part of Sky’s Ocean Rescue campaign. And more recently, Gove announced his support for an “all-in” deposit-return scheme, claiming the scheme would create a “clearer financial and social signal to recycle” for consumers and businesses alike.

Gove also ushered in a ban on bee-harming pesticides, and moved to protect environmental legislation post-Brexit, by agreeing to set up a ‘shadow watchdog’ for post-Brexit environmental protection — despite Defra itself losing more than two-thirds of its employees, who were instead tasked with delivering the UK’s exit from the EU.

Gove was also a vocal figurehead that tended to show some genuine compassion in response to the youth climate strikes, claiming that “collective action of the kind [the strikes] are championing can make a difference, and a profound one… together we can beat climate change”.