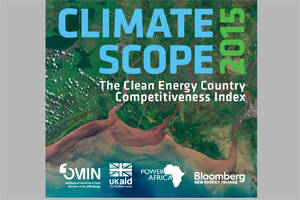 Climatescope surveyed and analyzed 55 important developing world nations in Africa, Asia and Latin America and the Caribbean to evaluate their ability and potential to attract capital for low-carbon energy sources and measure what has been achieved to date. The report focused particularly on India and China where 10 states and 15 provinces were examined in greater detail.

This second edition of the global survey documents important continued progress during the 2014 calendar year across these nations, which can be regarded as a proxy for emerging market countries more broadly. Once again, Climatescope focused its attention on the newest low-carbon emitting clean energy technologies – wind, solar, geothermal, biomass, small hydro and biofuel technologies, but not large hydro and nuclear power.