The COP26 Presidency Unit has published the draft "cover decision" of negotiations at the summit so far, calling on nations to "revisit and strengthen" their 2030 climate targets by the end of 2022 in order to keep any chance of reaching the 1.5C pathway of the Paris Agreement alive. 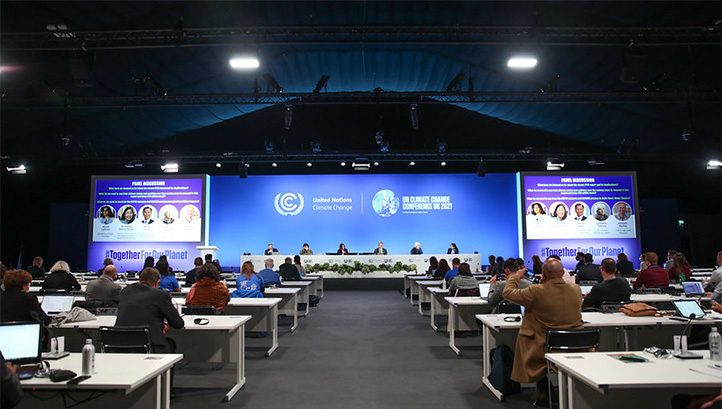 The documents set up a tense negotiating period at Glasgow

The COP26 cover decision, which arrived later than scheduled, sets out what negotiators at the two-week summit hope will be the outcome of a new and strengthened approach to climate action. The decision spans three documents, but just 14 pages, and reiterates or “welcomes” many of the major announcements at COP26 to date – including funding commitments on adaptation and pledges on deforestation.

The cover decision “expresses alarm and concern that human activities have caused around 1.1C of global warming to date” and stresses the “urgency of increased ambition and action” across key themes such as mitigation, adaptation and finance.

While mitigation and adaptation are heavily referenced across the three documents, mentions of fossil fuels are fleeting. This is unsurprising as the Paris Agreement doesn’t officially mention fossil fuels, but the cover decision does call upon nations “to accelerate the phasing out of coal and subsidies for fossil fuels”.

Other notable inclusions across the cover decision include a “work programme” to urgently scale up ambitions over the next decade through key discussions at future COPs. This includes encouraging nations who are yet to do so to update their Nationally Determined Contributions (NDCs) by November 2022.

The document also calls for nations to “revisit and strengthen” their 2030 targets by the end of next year, in line with net-zero and the Paris Agreement. Negotiators are also requesting that annual synthesis reports are issued, starting at COP27.

Is this is a good draft?

“Usually the text starts with some ambition, which then gets watered down. ‘To keep 1.5 alive, four words must be added: ‘fossil fuels phase out’, and countries must come back next year to close the gap.”

Tracy Carty, head of Oxfam’s COP26 delegation added: “This draft COP decision text is too weak. It fails to respond to the climate emergency being faced by millions of people now, who are living with unprecedented extreme weather and being pushed further into poverty.

“It fails to include clear and unambiguous commitment to increase the ambition of 2030 emission reduction targets next year to keep 1.5 degrees alive. Emissions are rising, not falling and current commitments are way off track for keeping this goal within reach.

“There are just two days left to negotiate a better deal. One that commits to increase adaptation finance to 50% by 2025, takes seriously developing country demands for finance for loss and damage, and sends the strongest possible signal emission reduction targets will increase next year in line with 1.5 degrees.”

However, there are some significant milestones in the document. As mentioned, fossil fuels are referenced in regards to phasing out subsidies and generation, but lacks any real time bound commitments. Last week, nations did pledge to phase-out financing and coal use, but the timelines stretched to the 2030s and 2040s.

Ultimately, there are a lot of resolutions to do better, but better may not be enough.

Climate Action Tracker (CAT) yesterday published new analysis of the temperature pathway of commitments made at COP26, stating that they are likely to result in 2.4C of warming. The International Energy Agency (IEA) had put the pathway at 1.8C but CAT has pointed out that most long-term net-zero plans from nations do not have credible delivery plans, which the IEA has not fully factored in.

As such, the world is still only on the threshold of the lesser 2C target of the Paris Agreement and there are some serious doubts as to whether negotiators can sufficiently ramp up ambitions in alignment with climate science to keep 1.5C alive.

The CMA, CMP and COP texts act as the framework for a tense 72-hour period of negotiations on a final agreement, but negotiations could well spill over into the weekend.

Nations will now negotiate these decisions through consultations in Glasgow. As this is only a draft, the final outcome will likely be much different to what has been presented today and has disappointed quite a few parts of the green economy.

A lot of the work over the next few days will focus on “filling in the blanks” on reporting mechanisms that promote transparency on performance against targets that are either impending or existing.

Today I’ve been digging into the #COP26 negotiations on transparency (aka are countries doing what they promised on GHGs, $$$ & adaptation)

Need to get to zero brackets for a deal… pic.twitter.com/mIr7CVYFbR

edie will continue to provide updates on the negotiations as they come in. Stay up-to-date with the latest news from COP26 with edie’s Live Blog.