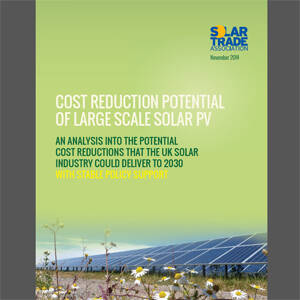 The STA analysis shows that the cost reduction of large-scale solar will occur more rapidly than DECC's costs have shown: a 33% drop in costs to 2020, with a further 11% reduction in the period 2020-2030. While individual technology cost is not the only consideration in developing efficient low-carbon electricity systems, this reduction would indicate that solar PV is cheaper than gas (Combined Cycle Gas Turbine or CCGT) by 2018, five years earlier than DECC suggest. It also implies that solar PV becomes cheaper than the wholesale electricity price between 2025 and 2028 - grid parity.

The debate about the role of solar PV in the UK’s energy mix is focusing increasingly on both cost competitiveness and the value that deployment brings to the UK economy. The STA has undertaken an exercise to obtain the industry’s view on the current and projected future costs of the technology, based on discussions with our members. This paper looks at the large-scale solar sector, based on a typical 10MW solar farm. It is anticipated that we will conduct a similar exercise across the domestic and commercial roof top sector in due course.

Levelised Cost of Electricity (LCOE) modelling is a widely known and accepted modelling technique to look at the overall cost of generating electricity. LCOE can be defined as the ratio of the total costs of building and running a plant to the total amount of electricity generated over the plant’s lifetime. Further details on LCOE can be found in a report for DECC by Mott Macdonald1; this 2010 paper provides the methodological basis for the 2013 DECC report ‘Electricity Generation Costs’ (EGC).