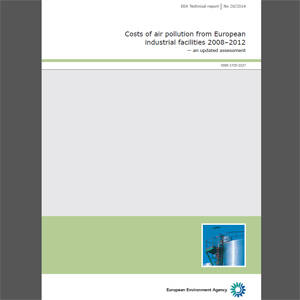 Since 2011, the annual assessments of Europe’s air quality published by EEA have regularly concluded that, despite a number of past successes in reducing emissions, air quality still needs to improve in order to reduce harm to human health and the environment. The need for regularly updated knowledge concerning air pollution sources, the subsequent levels of human and environmental exposure, and its associated costs remains important.

This report presents an updated assessment of the cost of damage to health and the environment in monetary terms from air pollution released in the years 2008 to 2012 by industrial facilities in the EU-27, Norway and Switzerland.