Last month, evian launched a digital dashboard enabling consumers to track its progress towards key plastics targets. In an exclusive interview with edie, the brand's global vice president Shweta Harit said that brands should no longer "hide anything" around their sustainability journey. 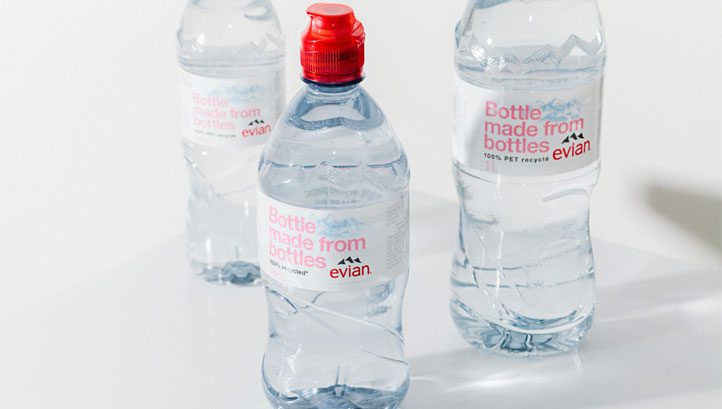 In certifying as a B-Corp

April 2021 was a hugely busy month for the sustainable business community. In the US, Joe Biden held his first inter. In the UK, local election candidates touted their green credentials in a bid to secure votes. And, as always, Earth Day provided a platform for dozens of businesses to make new environmental commitments and to launch innovative products.

Many environmental campaign groups have expressed skepticism about the private sector’s involvement in Earth Day in the past. Indeed, just a few short years ago, announcements seemed to be centred on limited-edition products and non-science-based goals on tree planting or charitable donations.

Against the backdrop of the net-zero movement and the Covid-19 recovery, the mood this year was different, with dozens of businesses outlining science-based climate commitments and resource targets that went beyond gimmicks. For Danone-owned water brand evian, Earth Day was used to announce the business’s certification as a B-Corp.

In an exclusive interview with edie, evian’s global vice president Shweta Harit described how the decision was taken because the B-Corp process helps businesses to take “a more holistic” approach to sustainability – coupling action across many environmental and social issues – while also increasing transparency.

“Certifying as a B-Corp felt like a next step, like the right thing to do, rather than something that’s simply there for telling consumers about,” Harit said.

“At evian, we don’t have a sustainability team and then a separate brand marketing team. Sustainability has to be a part of everything we do. We do have an expert who ran the certification, but all of us got involved.”

“As a bottled water company, sustainability is absolutely integral to our future…. Our product is what the earth gives us.”

Harit also provided detail on the specifics of the certification process, explaining that assessment had to happen on a “piece by piece” basis in terms of both business areas (functional and geographical) and topics. Across all topics, evian achieved a weighted average score of 81.3 out of 200. B-Lab estimates that the average business would score 50.9 and requires firms to pass 80 to gain certification.

There are currently more than 3,500 certified B-Corps, with accredited brands in more than 70 countries. While membership has been growing rapidly, the initiative is still estimated to cover just 4% of businesses globally.

For Harit, part of the barrier to scaling up is that a multinational certification does not yet exist. Evian’s parent company, Danone, is assisting with the development of such a framework and hopes to be an early adopter. Several of its brands are certified, including. The same is true of Unilever, with certified brands such as Ben & Jerry’s and Pukka Herbs.

Another barrier, Harit argued, is a lack of consumer awareness in some nations. “I think the UK is ahead of the curve and I would love to see more initiatives like Ocado’s aisle for B-Corp brands. That’s when I think we’ll see a real shift – when shoppers know how to find and buy from these brands.

“It’s great that more businesses and staff are aware of this but, at the end of the day, we surely all want consumers to use their wallets as a form of vote – to tell us that they want to be supported to change consumption patterns because they want to change the world. If they aren’t aware, they can’t make that choice.”

“People know that there is a climate crisis now. But being aware and changing your habits are two very different things.”

Of course, one of the easiest environmental issues to engage consumers with is plastic. The airing of Blue Planet 2 in 2017 paved the way for a string of other media on the issue, as well as targeted campaigns. Hearts and minds were easily won by a crisis that impacts well-loved wildlife such as turtles and dolphins, and which is visible even at community and household level.

Along with the likes of supermarkets, health and beauty brands and food manufacturers, bottled water firms have found themselves at the centre of this so-called ‘war on plastics’ movement. Nestle Waters faced particular criticism for its ongoing extraction of water from water-stressed communities such as California and Michigan, before selling it back, in plastic bottles, to locals for high profit margins.

Harit maintains that “evian is the water – not the container around it”, adding that the brand has been working on plastics pollution and water stewardship long before the B-Corp conversation began. Nonetheless, the changing demands of key stakeholders did prompt the brand to update its plastic commitments in 2018. The overarching mission is now to reach 100% recycled content; ensure that all plastic packaging is recyclable and recycled in practice, and to remove plastic that is already polluting nature, putting it back into the recycling system.

As evian announced its B-Corp milestone, it also launched a digital dashboard enabling consumers to track progress towards these goals in percentage terms. Harit said that the data should be updated around once every six months.

Outlining the thinking behind the dashboard, she said: “We wanted to share where we are on this journey; I think that having people tracking progress from brands is the way it should be. It’s okay for brands to say that work is still ongoing; why should a brand hide anything?

“In some ways, B-Corp certification also helps with transparency.”

While evian’s plastics strategy at present focuses more on recycling than on reduction and reuse – which are approaches preferred by campaign organisations including A Plastic Planet – Harit said these models will play more of a role in the future. In the coming months, for example, the brand will outline plans for launching and scaling a refill device called re-new in markets such as France and the UK. It will also work with TerraCycle’s direct-to-consumer Loop platform.

The #evianwater 💦you know and love, brought to your home in the most eco-responsible way thanks to evian (re)new with 60% less plastic! The talented @Elsa_Muse tested (and approved) it 😉#evianrenew #circularbrand

* compared, per liter of water, to 1.5L evian bottle. pic.twitter.com/8m9DvfMioW

Another key challenge, Harit added, will be scaling up supply chains for high-quality recycled PET. The brand currently uses 43% recycled content and, while it is close to the 100% mark in the UK, sourcing material of the right quality has proven more challenging in other markets. Several other brands seeking to scale recycled content, including PepsiCo, Coca-Cola and Procter & Gamble, have spoken out about this present imbalance between supply and demand.