Supermarket the Co-op has partnered with environmental charity Hubbub to launch a network of 100 'community fridges', which will enable food redistribution. 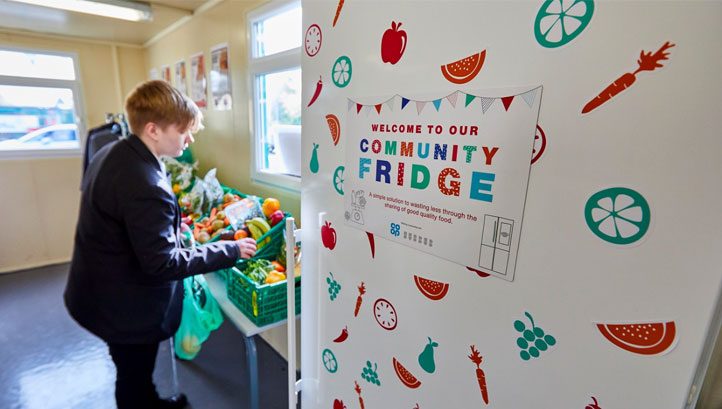 Hubbub has been operating community fridges since 2016 and, at present, hosts some 150 fridges across the UK. Almost 900,000 meals are presently redistributed each month through this fridge network.

With the new 100 fridges, financed by the Co-op, the network could redistribute a further half a million meals each month, Hubbub said in a statement.

Aside from the obvious benefit of mitigating food waste – which contributes to climate change – the fridges can play a role in tackling social issues including food poverty, poor community connection and a lack of basic cooking and nutrition skills. To this latter point, the community fridge network operators also facilitate cookery and food growing workshops.

As well as financing the fridges, Co-op will donate surplus food from nearby stores. It will encourage customers and other local businesses to follow suit.

“As a co-operative, we recognise our responsibility to make a genuine difference and have already made a number of interventions to help tackle food poverty and create fairer access to food, through our food share partnerships and our donations to FareShare,” Co-op Group’s chief executive Steve Murrells said.

“However, our work in our local communities has shown us that to really make a sustainable difference, we need to co-operate with others to build the resilience needed for the future.”

The move has been welcomed by Marcus Rashford – leader of the Stop Child Poverty task force, of which the Co-op is a member.

According to WRAP,  food waste in UK households (6.6 million tonnes) outweighed the amount of food waste produced by businesses at all stages of the food value chain in 2020 – as it has done for several years. Domestic food waste accounts for 70% of the national annual food waste mountain.

WRAP has noted, however, that many retailers are experiencing challenges with redistributing surplus food through their usual channels, due to lockdown restrictions. The impact of the pandemic on their food waste figures will be quantified in the coming months.

WRAP has also seen a trend towards behaviours in the home that can help to reduce food waste, such as batch cooking, freezing and using leftovers, since last March. Food waste from homes, on a monthly basis, is currently some 22% below pre-lockdown levels. WRAP is warning, though, that levels could rebound as lockdown lifts without support for behaviour change from bodies including businesses.

This is not to say that there is not more work to be done to mitigate food waste from businesses. The private sector, at large, is off-track to deliver UN Sustainable Development Goal (SDG) 12.3, which involves halving food waste by 2030.

A core part of WRAP’s efforts to increase ambition and action is a Food Waste Reduction Roadmap, tracking progress across the value chain “from farm to fork”. Developed and operated in partnership with IGD, the Roadmap has been supported by dozens of businesses and, in 2020, supported the mitigation of180,000 tonnes of food waste, valued at £300m.