COP26 President Alok Sharma had unveiled a final draft proposal for negotiations, with key measures to raising climate ambitions by the end of 2022 and the phase-out of "inefficient" fossil fuel subsidies surviving in the texts. 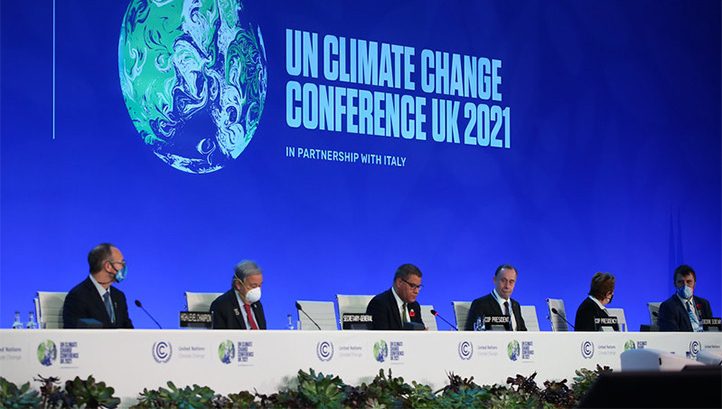 COP26 was meant to have finished on Friday afternoon, where world leaders would’ve presented a new proposal to meet the ambitions of the Paris Agreement through concerted efforts to keep 1.5C “alive”.

As with most COPs, the negotiations have overrun. However, on Saturday morning (13 November) COP26 President Alok Sharma published a “Draft COP decision”.

Two previous versions of this decision have been published over the course of the week, with the language – and therefore impetus for action – varying each time.

The mention of fossil fuels has survived the latest round of negotiations and proposals. At the start of the week, the draft called on upon nations “to accelerate the phasing out of coal and subsidies for fossil fuels”.

In the updated version, the language has been watered down slightly. It now only calls for the phase-out of “unabated” coal power and “inefficient subsidies for fossil fuels”. It comes after nations such as Saudi Arabia lobbied for the reference of fossil fuels to be removed from the documents altogether.

This morning’s “final draft” keeps the most recent references in but “recognises” the need for support towards a “just transition”.

Also surviving the latest round of amendments is a call for nations to formulate and publish updated Nationally Determined Contributions (NDCs) for 2030 by the end of next year. Again, an additional caveat has been added in the latest text, which “takes into account different national circumstances”, seemingly to appease some nations, like China, that believe their existing targets are stretching enough.

Mentions around climate finance and adaptation remain largely unchanged in the latest texts, but there is more emphasis on the relationship between humanity and the planet and how combatting the climate crisis and transitioning to a low-carbon economy must be achieved in ways that “respect, promote and consider their respective obligations on human rights, the right to health, the rights of indigenous peoples local communities, migrants, children, persons with disabilities and people in vulnerable situations and the right to development, as well as gender equality, empowerment of women and intergenerational equity”.

The text “urges” nations to “to further integrate adaptation into local, national and regional planning” and welcomes announcements on this subject to date. The previous draft noted that a “technical assistance facility” will be introduced to support loss and damage in relation to climate change in developing countries. This will fall under the Santiago Network from the UNFCCC. This remains in the final draft.

Heading into negotiations this week, China and the G77 – which represents 134 developing nations – had proposed a Loss and Damage Facility that would see developed nations offer reparations for vulnerable nations to respond to the damage caused by climate-induced events.

This facility has not been included in the final draft, with reports suggesting that the US and the EU had moved to block its inclusion.

Commenting on this removal, Tracy Carty, head of Oxfam’s COP26 delegation said: “Here in Glasgow, the world’s poorest countries are in danger of being lost from view, but the next few hours can and must change the course we are on. What’s on the table is still not good enough.

“We need the strongest possible outcome to ensure governments come back next year with strengthened emission reduction targets that will keep 1.5 degrees alive. And decisive progress on finance to help countries adapt and for the loss and damage endured. It is of deep concern that developing countries’ proposal for a loss and damage finance facility has not been included in this new draft.”

The texts again “note with concern” that current provisions of climate finance for adaptation “remains insufficient to respond to worsening climate change impacts in developing countries”.

It, therefore, “urges” developed countries to “fully deliver” the $100bn goal through to 2025, with an emphasis on transparency and reporting mechanisms to outline how they are financing this transition.

Sharma issued a statement last night where he shared optimism that negotiations could be wrapped up this afternoon, with a formal declaration to follow. Sharma also said he was confident at COP26 would finish on time last week.

A final stocktake will take place today, likely at around midday, where nations will have a platform to run through the latest documents.

From there, its back to behind-closed-door negotiations with a final declaration hopefully confirmed and published today, but don’t be surprised if a final document doesn’t arrive until Sunday.