As the dust settles on COP26 in Glasgow, people are still getting to grips with the new Glasgow Climate Pact and what that means for the global climate movement. Here, edie outlines seven key talking points (not all of them bad) from this historic new announcement. 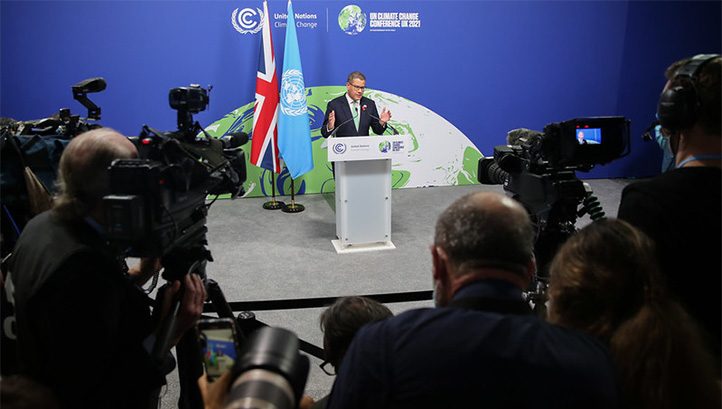 Two years of preparations culminated in two weeks of tense negotiations inside the Blue Zone at COP26. The result, a universal agreement that 1.5C is the required destination, but that the means to reach them vary in importance from nation to nation.

The new Glasgow Climate Pact, confirmed on Saturday (13 November) after negotiations spilled over past the 12-day deadline, looks set to guide nations towards key efforts to decarbonise as part of a just transition.

Here, edie rounds up the key talking points of this new and global pact.

History made as fossil fuels included…

In a first for any COP, the final text mentions fossil fuels, stating that “unabated” coal power should be phased down as a priority and that “inefficient subsidies” for all fossil fuels should be removed, although no specified dates are mentioned.

In the first week at COP26, the UK Government confirmed that more than 190 parties, including China and Poland, as well as institutional financial organisations, had agreed to a range of different measures that will signal the end of coal as a global power source.

The commitments have been issued through a “Global Coal to Clean Power Transition Statement” at COP26 in Glasgow – a Statement that captures coal phase-outs from governments and the private sector in developing countries, vulnerable nations and some of the world’s largest polluters.

The coalition has agreed to phase-out coal power from major economies by 2030 and 2040 for the rest of the world. This, according to the Statement, will be delivered as part of a “just transition” that benefits workers and communities that currently rely on the coal industry.

There is also, for the first time, an acknowledgement of the need for a “just transition” to a clean energy system in the official Pact, in the form of a “recognition” of support. Additionally, for the first time, methane is mentioned; nations are “invited” to reduce methane emissions this decade. More than 100 nations are now committed to cutting methane emissions by 30% by 2030.

…But China and India water down language on phase-outs

In what was a last-minute objection to global negotiations, the likes of China and India called for a weakening of the language on fossil fuels, while the US and EU managed to remove key mechanisms on loss and damage which would see richer nations support developing nations.

When the first drafts of the negotiations emerged, the language used called for the phase-out of fossil fuels and subsidies. In subsequent drafts, the language was watered down, with caveats attached for both use and financing.

The phase-out of coal was switched to “unabated” sources, meaning they can still be used in combination with carbon-capturing technologies, while “inefficient” was added to the subsidies line.

The UK’s COP26 President Alok Sharma said he was “deeply sorry” during the final minutes of negotiations, as the language listed in the Pact was weakened once more. Specifically, the mention of fossil fuels has changed from a phase-out to a phase down.

Under the Glasgow Climate Pact, nations have been requested to consider, formulate and publish updated Nationally Determined Contributions (NDCs) to the Paris Agreement for 2030, by the time COP27 begins in Egypt next year.

Many nations had only just updated their existing NDCs going into COP26, in a bid to move away from a 2C pathway towards a 1.5C trajectory. The UK, for example, updated its NDC after exiting the European Union, targeting a 68% reduction in emissions by 2030.

This new “ratcheting mechanism” will enable the public and other nations to scrutinise slow movers on climate action, which pushes the world closer to a 1.5C alignment requested in recent IPCC reports. Indeed, the new NDC submissions made at COP26 alone helped move the dial and into the 3C threshold (depending on what research you look at). More on that shortly.

Heading into negotiations on Saturday, nations including China and the G77 – which represents 134 developing and emerging economies – expressed anger that their proposals for a Loss and Damage finance facility had been watered down, following reported interventions from the US and EU.

Such a facility would see developed nations offer reparations for vulnerable nations to respond to the damage caused by climate-induced events. Some African nations already see 10% of GDP equivalent spent on adaptation and damage repair annually.

There were major huddles in the plenary room just before the gavel came down on the Glasgow Climate Pact. Developing nations wanted, instead of further talks, a time-bound and numerical commitment this COP.

The Pact does confirm that a “technical assistance facility” will be introduced to support loss and damage in relation to climate change in developing countries. This will fall under the Santiago Network from the UNFCCC, but many developing nations left Glasgow reeling from the lack of cooperation from developed nations to support them through additional finance.

Climate finance to ‘at least double’

While developed nations did move to veto the loss and damage facility, the Glasgow Climate Pact does reiterate a commitment to deliver on existing financial goals that have been woefully ignored in recent years.

Developing nations had been urging measures to fill the historic shortfall. Instead, the text  “urges” developed countries to “fully deliver” the $100bn goal through to 2025, with an emphasis on transparency and reporting mechanisms to outline how they are financing this transition.

Article 6 fleshed out, but concerns remain

Negotiations on Article 6 of the Paris Agreement – the section pertaining to carbon markets and how emissions reductions under NDCs can and should be accounted for – have been a focus area throughout COP26.

In approving the Glasgow Climate Package, world leaders have also made some key resolutions on Article 6. The final agreement effectively resolves issues regarding paragraphs 2 and 4 of the article, which covers bilateral carbon trades and a centralised accounting hub to replace the Kyoto Protocol’s Clean Development Mechanism (CDM).

After what has been reported as slow progress on this tricky issue throughout COP26, the final text states that “internationally transferred mitigation outcomes” (i.e. carbon offsetting) should rely on “real, verified and additional” emissions removal taking place from 2021 onward. There is a requirement for co-benefits in terms of adaptation and the economy, and for nations to put at least 5% of the proceeds into adaptation.

Plans for a potential two-tier system, and to transfer existing forest credits Into Article 6, were deleted from drafts, in a move most green groups have praised.

The Pact isn’t aligned to 1.5C

A lot of the talks going into COP26 – and indeed during the first week – were focused on how whether the negotiations “could keep 1.5C alive”.

Over the course of COP26, a flurry of new national climate targets were made, marking a decisive step forward in realising the ambitions of the Paris Agreement.

The International Energy Agency’s (IEA) World Energy Outlook, published in October, found that more than 120 nations have unveiled new targets to reduce emissions by 2030, while governments and nations account for 70% of global carbon emissions had made some sort of net-zero pledge.

The IEA now estimates that, if these targets were met on time, the world would be on course for an 1.8C global temperature rise by the end of the century. Others put the trajectory at a slightly different number, most notably Climate Resource claiming the pledges would lead to 1.9C of warming. This is a more optimistic reading however. Climate Action Tracker (CAT) published new analysis during COP26, stating that they are likely to result in 2.4C of warming.

It is for this reason that the call for NDCs to be increased is so important to setting the world on a path that is in alignment with 1.5C.

One thing that COP26 did prove is that the Paris Agreement is working. Since its inception, the world has moved from a near-4C warming trajectory to near the 2C threshold of the Ambition set back in 2015. More is needed, but the Glasgow Climate Pact has proven that 1.5C is the “north star” for political and societal movements – as proved by the extremely important presence of youth activists at the summit and outside its metaphorical walls.