Global cotton production is vastly unprepared for the looming climate crisis, with more than half of the world's growing regions set to be exposed to water scarcity and extreme weather events that will disrupt the market. 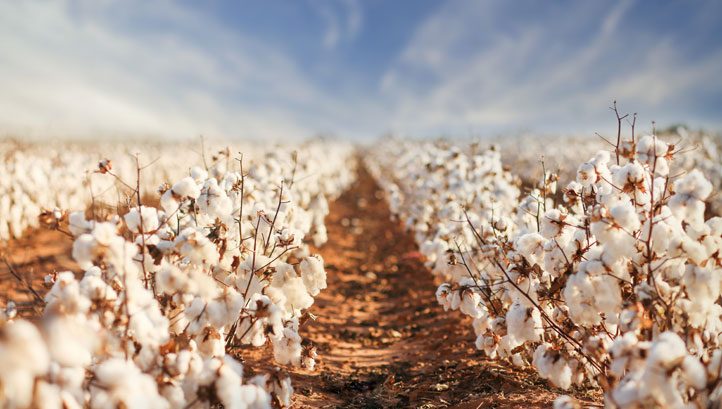 That is according to new analysis has been commissioned by the Cotton 2040 initiative, facilitated by Forum for the Future and supported by Laudes Foundation. It warns that 50% of the world’s cotton-growing regions will face high temperatures, water scarcity and extreme weather events by 2040.

As such, Cotton 2040 is calling on companies that rely on cotton to improve climate adaptation and mitigation across the value chain, while also prioritising decarbonisation in an attempt to limit the impact of a changing climate.

The analysis found that 40% of growing regions will experience a decrease in the length “growing seasons” due to temperature increases. In fact, the six highest cotton-producing countries – India, the US, China, Brazil, Pakistan and Turkey – are exposed to increased climate risk.

Northwestern Africa, including nations like Sudan and Egypt, and Western and Southern Asia are particularly at risk from climate-induced disruption.

Forum for the Future’s chief executive Sally Uren said: “This analysis is a wake-up call for the cotton industry, on which much of the apparel sector is currently hugely reliant. In order to build resilience for a highly disrupted and uncertain future, the widespread shifts to sustainable forms of cotton production must be bolstered by ambitious and aligned action to reduce carbon emissions while also preparing the industry to operate in a very different world.”

Cotton has a market value of $12bn and accounts for 31% of raw materials used in the textile market. It has an annual economic impact of more than $600bn and supports 350 million workers who cultivate or process the material.

It is also linked to water pollution and soil degradation – both of which contribute to biodiversity loss.

Moreover, the events of 2020 have shone a light on human rights breaches in textile supply chains. In 2019, media in the UK and US reported allegations that ethnic minority Muslim groups were being held in labour camps in China’s Xinjiang region. Then, analysis determined that one-fifth of all cotton sourced globally passes through businesses in Xinjiang, making the majority of the fashion industry indirectly complicit in the atrocity. The US Government has since imposed sanctions on cotton from Xinjiang.

Fashion brands have also been accused of failing to pay suppliers for in-process or completed orders, citing the financial impact of the pandemic. Gap Inc. and other businesses, including Primark, agreed to pay after pressure from groups coordinated by Remake and the Clean Clothes Campaign. Some big names, including the parent companies of Topshop and Urban Outfitters, are yet to make this commitment.

In related news, the owner of fashion brands such as American Apparel and Comfort Colors has joined the US Cotton Trust Protocol – a science-led initiative that sets standards for businesses to grow cotton more sustainably.

Gildan Activewear had joined the initiative. The company is one of the largest consumers of cotton in the US, with the material accounting for the majority of fibre used in its products.

“Gildan has a proven track record of a strong commitment to sustainable practices, and we are pleased to welcome them as new members,” the US Trust Protocol’s president Dr. Gary Adams said.

“Their company was founded on the principle of producing sustainable and ethical apparel, to which cotton is a key component. As members of the US Cotton Trust Protocol, we will help them further this principle by providing them third-party verified assurances that they are sourcing responsibly produced, quality fibre and reducing environmental and social risk in their field-to-mill supply chain.”