The UK Government has on Friday (27 August) announced that it will run a consultation to outline what single-use plastic items could be banned in England over the coming years. 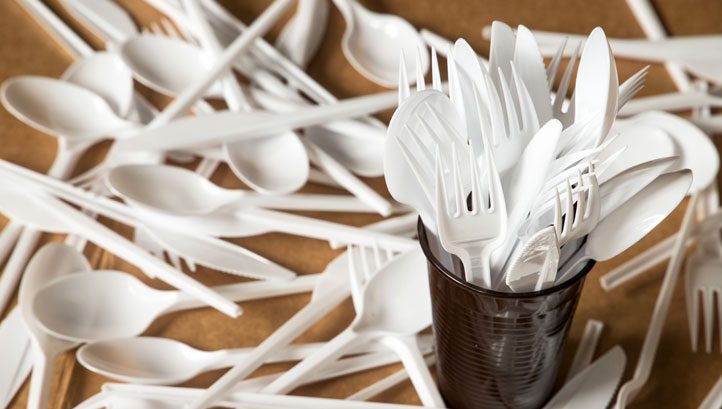 The Government will launch the consultation this Autumn, seeking views on what single-use items should and can be banned in England.

The Government will consult on whether items such as single-use plastic plates, cutlery and polystyrene cups could join the list of single-use items that have already been banned. The items could join single-use plastic straws, stirrers and cotton buds, which were banned from sale and distribution in England last October. Additionally, the 10p levy on plastic bags was extended to all businesses in England in May.

Defra statistics show that 95% fewer single-use plastic bags are sold in supermarkets on a monthly basis than they were before the bag charge was introduced in 2015. On a per-person basis, bag purchases annually have fallen from 140 to four since 2014.

Further details of the consultation, including the full list of single-use items under review, will be announced in the upcoming weeks.

Environment Secretary George Eustice said: “We’ve all seen the damage that plastic does to our environment. It is right that we put in place measures that will tackle the plastic carelessly strewn across our parks and green spaces and washed up on beaches.

“We have made progress to turn the tide on plastic, banning the supply of plastic straws, stirrers and cotton buds, while our carrier bag charge has cut sales by 95% in the main supermarkets. Now we are looking to go a step further as we build back greener. These plans will help us stamp out the unnecessary use of plastics that wreak havoc with our natural environment.”

The consultation builds on the Government’s overarching commitment to prevent all avoidable plastic waste by the end of 2042.

As part of that commitment, the Government is introducing a packaging tax from April 2022, set at £200 per tonne, on any plastic packaging that doesn’t meet a minimum threshold of at least 30% recycled content.

Jo Morley, Head of Campaigns at City to Sea, said: “We welcome the news that the government are taking steps to tackle some of the most polluting single-use items. This is a much-needed move, that we as campaigners have been calling for, along with thousands of our supporters and members of the public.

“We need now to take a leading role in banning unnecessary single-use plastics to see real benefits for the nation’s and the world’s wildlife.”

Friends of the Earth, Kierra Box, said: “Further consultation on plastics is no bad thing, but a product-by-product approach won’t fix the plastic pollution crisis at the speed we need. We can’t wait another 20 years to stop producing avoidable plastic waste typically derived from dirty, climate-wrecking oil, which chokes our seas, harms wildlife and enters our food chains.

“As part of the government’s upcoming Environment Bill we need legally binding targets to slash plastic pollution, and to cut down on all single-use products, including paper and glass. It’s the perfect opportunity to make reuse and refill part of everyday life. We know the public wants it, the government must now make it easier for us all to make better choices.”

Sarah McMonagle, head of external affairs at CPRE, the countryside charity, said:  “Throughout lockdown, we saw littering increase across many of our local green spaces and treasured patches of countryside. So, we hope today’s announcement is a sign of greater government action to tackle the plastic and waste crisis. But consultation after consultation suggests the government is more interested in tinkering around the edges rather than seizing the opportunity to tackle plastic waste.