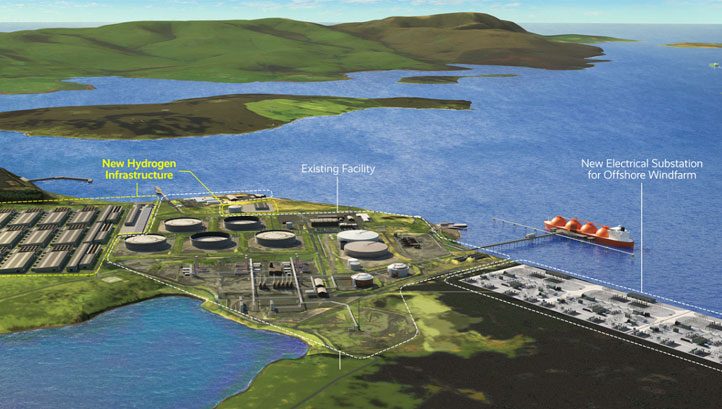 Pictured: An artist's impression of the finished facility from above. Image: OWPL

The new consortium is called Offshore Wind Power Limited (OWPL) and has today (12 October) revealed that it has submitted a proposal to develop an electrical substation, green hydrogen production facility and maritime refuelling hub on unused land next to the existing Flotta terminal.

The terminal is currently a major crude oil reception, processing, storage and export facility led by Repsol Sinopec Resources, which is collaborating with OWPL, as well as local firm EMEC Hydrogen and multinational Uniper on the proposed hydrogen hub. It has been in operation since 1976 and under Repsol Sinopec’s leadership since 2000.

Repsol Sinopec’s chief executive Jose Luis Munoz said the project “would enable the terminal to be progressively transformed over time into a diversified energy hub where conventional oil and gas operations continue, co-existing alongside the development of a sustainable long-term green future for the facility”. He added that it would help to create a “secure future for skilled oil as gas workers in Scotland”.

OPWL’s proposals have been submitted to the Crown Estate Scotland for its offshore wind leasing round. If the application is successful, the facility would come online in the late 2020s, with the consortium foreseeing a 25-year operational life.

The consortium has not yet revealed the likely capacity of the hydrogen facility but has submitted plans for a 2GW wind farm to power its operations, whereby electrolysis will be used to split water. Hydrogen generated at the plant could be exported, blended into the gas grid at St Fergus and/or used to refuel ships.

“The production of green hydrogen is a hugely exciting opportunity for both offshore wind and the Scottish supply chain,” said the Renewable Infrastructure Development Group’s commercial director Mike Hay.

“Projects with substantial capacity factors, such as the West of Orkney Windfarm, could deliver highly competitive power to facilities like the Flotta Hydrogen Hub which could, in turn, supply demand for hydrogen both nationally and internationally.”

The Leader of Orkney Islands Council, James Stockan, added: “Flotta is an ideal location for green hydrogen production – it is surrounded by the best wind resource in Europe, it lies close to major shipping routes within the vast natural harbour of Scapa Flow. The time is right to maximise the incredible natural assets and geography of the Flow and Orkney to ensure a long-term sustainable, climate-friendly future for our communities.

“We are very much open for business and ready to work with potential investors and operators to develop the significant strategic and international opportunities we know that our islands offer. The potential here is immense and we, as a Council, will do everything we can to support and enable this bright new opportunity.”

In the lead-up to the Strategy’s publication, and in the months that have followed, plans have been revealed for several major low-carbon hydrogen projects. A consortium including The Port of Cromarty Firth and ScottishPower are assessing plans for up to 15 new offshore wind sites, to power a new electrolyser, for example. Separately, Scottishpower is planning to co-locate a 20MW electrolyser with its Whitelee onshore wind farm.

The Energy Networks Association (ENA) has this week published a new report assessing how green hydrogen generation and storage could help to ensure energy security in a lower-carbon world. The report, entitled ‘A System for All Seasons’, takes into account the current gas price crisis as a key driver for a low-carbon system, as well as the UK’s net-zero target and interim commitment to a fully clean electricity grid by 2035.

The report concludes that Britain’s wind and solar farms could power electrolysers generating between 60-80GW of renewable hydrogen each year – using only the surplus energy generated in the spring and summer months. This hydrogen could then be stored in salt caverns and disused oil and gas fields in the North Sea, with storage capacity more than sufficient to match generation.

As well as ensuring a secure energy supply over the winter months in a low-carbon future, this approach, the ENA argues, could reduce the number of separate wind farms needed by 2050 by more than 75%. This will be down to efficient use of electricity generated by the offshore wind sector, which the Government hopes will grow to surpass 40GW of installed capacity by 2030.

The ENA worked with the University of Edinburgh, Centrica, Scotia Gas Networks and Storenergy to produce the report.

The ENA’s green gas champion Chris Train said: “This research shows how green hydrogen can provide a clean energy bumper that can protect us from fluctuations on the international energy markets, 24 hours a day, 365 days a year – whatever the weather, come rain or sunshine.

“It will also allow us to get the most out of the energy infrastructure that is at the forefront of our renewable revolution, whilst ensuring that we have a net-zero energy system that is truly a system for all seasons.”

edie recently interviewed Train as part of a longer feature exploring the benefits and challenges of scaling low-carbon hydrogen and outlining which sectors will benefit most, under which timelines. You can read that article in full here.