International property and investments group Lendlease has spoken exclusively with edie about the actions it has taken to decarbonise in its first year since setting a 2025 net-zero target for operations and a 2040 'absolute zero-carbon' target. 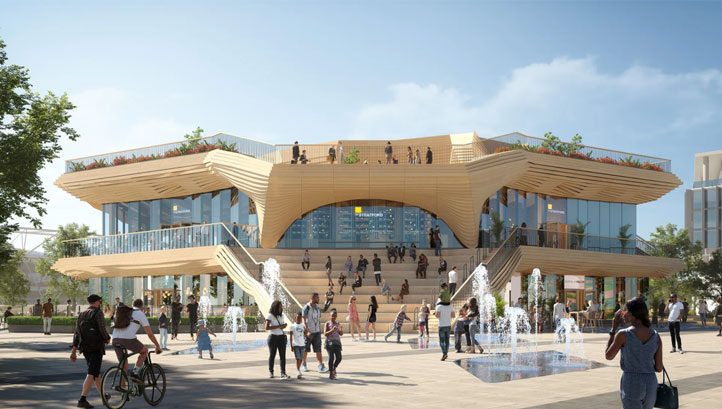 The business first announced the targets, which apply across the entirety of its footprint in Europe, last December. The focus on ‘absolute zero-carbon’ was selected to avoid an over-reliance on offsetting, prioritising science-based emissions reductions across the value chain.

Some of the shortest-term commitments bolstering the overarching ambitions were promises to source 100% renewable electricity and to transition to low-carbon liquid fuels at all UK construction projects by the end of 2021.

In a new progress report out today (15 October), Lendlease has revealed that it has met these milestones. On renewable electricity, managing director for sustainability and social impact Paul King tells edie, the business has opted for 100% renewable tariffs for all locations. For 70% of locations, tariffs exclude biomass and energy-from-waste, backed with REGO certificates for UK-based wind, solar and tidal energy.

“We haven’t pursued Power Purchase Agreements yet, although we may do in the future for some of our major urban regeneration projects,” King adds.

On low-carbon liquid fuels, 60% of UK construction projects have been transitioned to hydrotreated vegetable oil (HVO) as an alternative to diesel, and the remaining projects will be transitioned by the end of the year. The business’s UK construction sites use around 400,000 litres of diesel each year and an annual reduction in related emissions of 1,000 tonnes is expected from the switch to HVO, given that its life-cycle emissions are up to 90% lower.

HVO is a popular alternative to diesel as it is a “drop-in” replacement; there is no need to change equipment. However, in the longer-term, some other firms including Mace Group are assessing hydrogen alternatives.

Like many businesses, Lendlease is aiming to reduce in-house, operational emissions to a shorter timescale than for indirect (Scope 3) emissions.

Meeting the 2040 target – aside from working with suppliers (more on this to follow) – will require the firm to engage with commercial and domestic tenants. This is a process that is often cited as a challenge, anecdotally, at edie events, by end-user businesses on the other side of the equation, with landlords often having been reluctant to disclose energy information or invest in retrofitting historically.

This could all be about to change, as tenant pressure for green properties post-pandemic mounts. A survey of 2,000 decision-makers in the commercial property sector this summer found that more than half (55%) saw growth in demand for sustainable buildings over the past 12 months.

For Lendlease, work has already begun to meet these changing demands. The business has conducted a strategic review of its green leasing approach this year and this has resulted in an updated standard commercial lease to be used for all new office lettings. The Turing Building in the International Quarter London (IQL) development, in Stratford, will be the location for the first offices on the new green lease.

King explains: “I think the industry is progressing in its approach to green leasing, and with new rating systems like NABERS UK, which looks to ensure buildings really do operate the way they were designed to, I expect it will only become easier for tenants to engage with landlords on sustainability.”

It is hoped that the lease will be extended to all new lettings by 2030 – retail and residential, as well as offices. In the meantime, for residential properties, a new standard has been introduced that requires all new customers to be placed on a 100% renewable electricity tariff.

As is the case with most businesses in its sector, the bulk of Lendlease’s emissions are indirect (Scope 3). They account for 95% of the total emissions footprint. Within Scope 3, purchased goods and services account for 93% of emissions, largely due to the embodied carbon in building materials such as steel, concrete and aluminium. In comparison, leased assets account for just 4% of Lendlease’s Scope 3 emissions.

Addressing embodied carbon will be crucial for Lendlease to meet its 2040  target and, while embodied emissions from existing buildings can only be addressed by offsetting, there is the possibility to innovate for significant reductions for new builds.

“Embodied carbon is by far the biggest challenge that our industry faces when looking to decarbonise,” King summarises.

“I think embodied carbon is rising up the agenda for material manufacturers, who find themselves supported by groups like ResponsibleSteel and SteelZero, alongside green building councils and other industry bodies. We’re also seeing an increase in the use of timber across the sector too, which is a fantastic way to reduce the embodied carbon of a building.”

To King’s point on building councils and industry bodies, the World Green Building Council updated its Net-Zero Carbon Building Commitment last month to include new requirements on addressing embodied emissions. The Council is striving to unite the industry in halving lifecycle emissions by 2030 and bringing them to net-zero by no later than 2050.

However, recent research from the World Business Council for Sustainable Development and Arup found that less than 1% of building projects globally are currently calculating caron impacts across the lifecycle, with embodied carbon being the most common missing piece. The UK Green Building Council specifically published a Whole Life Carbon Roadmap for the sector this year.

With this in mind, King adds: “I do think that legislation will be required if we’re to see accelerated action in this space. We need to include embodied carbon in building regulations and planning requirements, and I hope that will be an outcome driven by COP26.”

For the UK specifically, the Heat and Buildings Strategy is due ahead of COP26, and there are reports that it could finally be published next week after delays of around one year. Internationally, the second Thursday of COP26 (11 November) has been dedicated to cities, regions and the built environment.