Delivery giant Hermes UK has placed an order for 168 fully electric vans from Mercedes-Benz and will integrate them into its fleet by the end of the year. 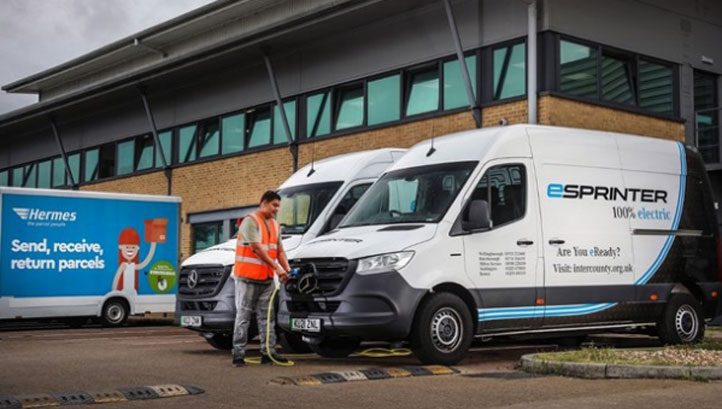 The new vans are Mercedes-Benz’s eSprinter model and mark the first large-scale purchase of pure electric vans for Hermes UK, following trials of two eSprinters at Hermes UK’s depot in Enfield, North London. The trials were run in partnership with supplier Intercounty Truck & Van, through which Hermes UK is also completing the new purchase.

Crucially, the eSprinters have an identical load volume to the front-wheel-drive version of the diesel Sprinter already used by Hermes UK.

According to Mercedes-Benz, the eSprinter’s 55kWh battery packs can be replenished from 10% of range to 80% in around 30 minutes, when an 80kW fast charger is used. Hermes UK has commissioned Pod Point UK to install charging points across its networks of ParcelShops, beginning in London and other cities with plans for low-emission zones.

“The transition to a zero-emission electric fleet is integral to our environment, social and governance agenda, and we’ve been keen to take the next, major step forward towards this goal,” said Hermes’ head of fleet, David Landy.

“However, we are under no illusions – this will not be an easy journey. From a purely operational standpoint, and given the current state of the technology, whichever way you look at it – whether in terms of range, payload or volume – a van with an internal combustion engine beats an electric one hands down.

“Only when it comes to tailpipe emissions does the battery-powered vehicle outshine the diesel. So, we know there are constraints and compromises to make, and we recognise that this is going to put extra pressure and increased demands on those colleagues out in our depots who are doing a difficult job, day in, day out.”

Hermes has also placed an order for 132 diesel Sprinters through Intercounty Truck & Van, but these are on one-year terms, meaning that the firm can replace them with electric vehicles (EVs) as soon as it is ready. It said in a statement that this measure will “tide it over” as EV infrastructure is installed.

Hermes’ parent company is Otto Group. Last year, Otto Group announced an ambition to become a carbon-neutral business by 2030, after delivering an ambition to halve Group-wide emissions between 2006 and 2020.

Otto Group has repeatedly stated that it will “pursue CO2 avoidance and reduction” before turning to carbon offsetting.

As well as EVs, Hermes is also exploring compressed natural gas (CNG) solutions for heavier vehicles. In August, the firm placed an order for 70 delivery trucks fuelled using CNG. These vehicles will take its total CNG fleet to 160 vehicles.

The news from Hermes came as Royal Mail confirmed plans for a six-month trial of 12 micro-EVs, to conduct last-mile deliveries across Edinburgh, Crewe, Liverpool, Swindon and London. The firm will use Paxter Cargos and Ligier Pulse 4s for the trials.