How can businesses deliver a more inclusive economy on the road to net-zero?

In 2020, many businesses vowed to 'build back better' from Covid-19, coupling financial recovery planning with new commitments around climate change and social justice. But how can they ensure that these focuses remain - and move from ambition to action? 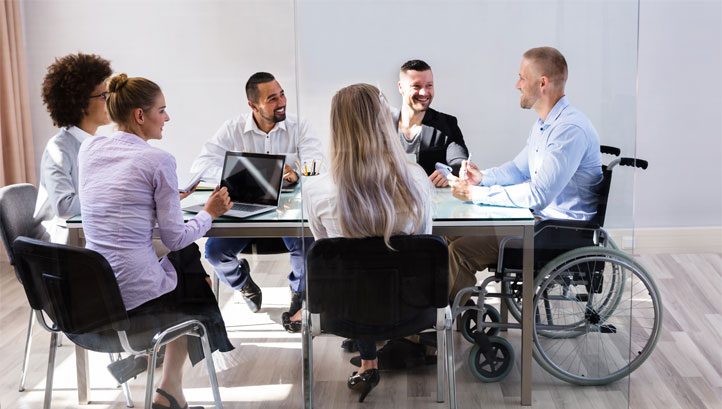 The past 12 months have seen many discussions around the "just" low-carbon recovery. But will the private sector move from talk to action?

This is the second part of a two-part feature exploring how sustainability in the private sector can become more intersectional. The first half focuses in on the individual professional, rather than the organisation, and can be accessed here.

It’s hardly surprising that purpose-led business has become something of a buzzword against the backdrop of Covid-19.

Citizens called for better support and protections as lockdowns shone a light on the ways in which some corporates are failing to protect the livelihoods of workers. For example, Boohoo, British Airways and Centrica are among the businesses to have faced high-profile media scandals over worker pay and conditions.

At the same time, the focus on climate action remained strong. If key sources of motivation in 2019 were the school climate strikes and the IPCC report, in 2020, they were the snowballing green recovery movement and the adoption of net-zero targets globally. Away from the high-level policy space, lockdown restrictions broadly heightened appreciation for nature and desires for clean air and low-carbon transport.

Corporate responses to these intertwined changes in social and environmental demands ranged from emergency remediation commitments, to the development of new sustainability strategies, to joining new collaborative initiatives (the likes of the Science-Based Targets initiative and EV100 have seen upticks in membership). In a select few cases, commitments were made to shift business models significantly; BP, for example, will cut fossil fuel production by 40% by 2030.

All in all, some three-quarters of UK businesses are believed to be rethinking their sustainability approach.

But, as Forum For the Future’s founder-director Jonathon Porritt explained at edie’s Sustainability Leaders Forum, the majority of corporate responses to social and environmental crises do not account for the “lag effect” – that data is outdated as soon as it is collected; that politicians take time to align with science; that laggard corporates are only moved by policy. All the while, negative impacts pile on top of each other. For climate and biodiversity, this can lock-in permanent outcomes like ice cap melt and species loss.

In a nutshell, Porritt said, “every time you raise the bar, you’ve raised the point where it should have been 10 years ago”.

As explained in the first half of this feature, lag effects can be seen in responses to social issues as well. Swathes of big-name brands were criticised, amid the Black Lives Matter protests last summer, for making one-off commitments after years or even decades of bad practice. Vogue staff told of how covers featuring black celebrities masked an internal culture of racist bullying. Similar stories emerged featuring brands like MAC Cosmetics, Reformation and DollsKill.

Some firms clearly see a shift to purpose-led business as a way to simultaneously overcome the immediate impacts of Covid-19; build in resilience to future risks like climate change or new pandemics; and get ahead of lag effects – all while avoiding blind spots that have left them scrambling to deliver apologies. December 2020 saw the Vatican announce a new corporate alliance designed to promote purpose-led capitalism. Members include MasterCard, DuPont and Johnson & Johnson. Elsewhere, The University of Cambridge Institute for Sustainability Leadership (CISL) published a ten-point manifesto for purpose-led business.

But, Porritt believes, many firms are congratulating themselves too soon and claiming the “purpose-led” badge before putting in the hard work. He said: “When businesses say ‘we understand all this jargon about sustainability, climate, biodiversity and social justice… we’ve baked it into our business model for the future’, I say: ‘no, you’ve made a start, but all you’ve done so far is gather the ingredients for your baking process’.”

Porritt explained that many firms claim to have an environmental and social purpose beyond their products but are still investing pension funds through schemes that finance fossil fuel companies or holding membership in trade bodies that oppose progression in green policy. Elsewhere, brands like Everlane, that are famed for producing environmentally sustainable products have been accused of failing to safeguard workers’ rights.

Certification schemes can provide businesses with the tools they need to avoid accusations of hypocrisy. The B-Corp movement, for example, requires businesses to submit updated data every three years to prove they are maintaining focus across a broad ESG spectrum. Issues assessed range from human rights protections

However, there is not yet a B-Corp certification path for multinationals. Unilever is currently contributing to its development but, for the moment, only SMEs, national firms or the subsidiaries of multinationals can gain certification. Danone is probably the largest company to be the most involved in this way – more than 20 of its subsidiary brands have been accredited and it is hoping to be one of the first to adopt the multinational certification after launch.

Porritt’s speech was followed by a panel discussion on ensuring social sustainability throughout the net-zero transition. Experts explored some of the things businesses can do on their journey to embedding purpose, that couple social and environmental approaches.

Anglian Water’s head of sustainability Andy Brown outlined how the firm adopted a “six capitals” accounting approach in the process of refreshing its purpose. It is not allowed to make key decisions based on financials alone; impacts on nature, communities, wellbeing and so on must also be considered.

Of course, accounting for things which don’t have an immediately obvious quantitative value is not without its challenges. Surveys revealing the gap between ambition and action on the Sustainable Development Goals have repeatedly flagged a lack of measurement metrics as a hurdle.

Panellists agreed that it is better to act without metrics than to wait – and that the historic desire from businesses for quantitative results must be challenged if businesses are to move beyond a “tick-box” approach and to deliver impacts proportional to their specific context.

He discussed the need for “principles rather than prescriptive tools” and Firmenich’s chief sustainability officer Berangere Magarinos-Ruchat agreed, outlining how the company developed new social targets “without the ease of science-based ways to measure performance”. Ambitions include creating 5,000 job opportunities for young people and ensuring that people with disabilities are better represented at all levels of the business.

Changing systems – even when you benefit from them

Some topics covered by the panellists and mentioned in the first half of this feature apply to organisations as well as professionals. Many a time has the importance of pre-competitive collaboration, open conversation and willingness to adapt in line with new information been highlighted for businesses weathering the pandemic.

Another skill that can be transposed from individual to organisational level is the need to challenge systems. Summer 2020 saw numerous conversations about the need for individuals to go beyond being “not racist” to being “actively anti-racist” – the difference being that the former merely involves changing personal actions, while the latter is about dismantling systems that perpetuate inequality.

Porritt ultimately used his platform to urge businesses that have gone beyond “doing less bad” in terms of environmental and social impacts to begin reshaping the very system in which they operate – modern capitalism – even though this system has helped them, historically, to reap financial rewards.

“Capitalism is totally unfit for purpose when it comes to addressing interlocking, converging crises,” he said, calling 2020 “a remarkable year in terms of corporate leadership, but one of the most illusory and inadequate years we’ve ever witnessed” in terms of missed opportunities for systems change.

Porritt did, however, argue that the seeds of change have been sown. He argued that the actions of a few bold companies – often brought about by tireless internal campaigning from the sustainability team – have “helped de-risk the whole sustainability story for governments and other businesses. It’s given them permission to be at least tentatively bold”.

Porritt is not alone. Calls to reshape capitalism have been gaining more media attention after speeches by the likes of Prince Charles and Alan Jope. Companies including Nestle and Cemex have called for policies like stricter climate risk disclosures, higher carbon taxes and a more rapid electric vehicle transition, even though this will result in higher upfront costs to them in the short-term. But these speeches and commitments are often met with the same criticisms – that they are being made by individuals with high levels of privilege, or businesses, rather than humans. Marginalised voices are typically absent.

In 2021, panellists agreed, businesses can do better by going beyond a “tick-box” approach to including these voices. People of different backgrounds should not only be the subject of community programmes or invited to take part in a standalone advertising campaign. They must be represented and supported, continually, at all levels of an organisation, both in its operations and across the entirety of its ‘Scope X’ sphere of influence. Solutions created by a select few, it was argued, oftentimes only work for those of the same backgrounds, which is simply disproportionate to the scale of current crises.

A more inclusive approach can already be seen outside of the business space, through events like the Youth COP and the various Citizens Climate Assemblies gathering ahead of COP26. But it remains to be seen whether businesses will be bold enough to follow suit.