How can sustainable businesses prosper post-Brexit?

As the Brexit deadline looms and the UK struggles to place an agreeable deal on the table, leading sustainability and energy experts have called on the nation’s business community to maintain progress towards a low-carbon, resource-efficient economy without support from Government. 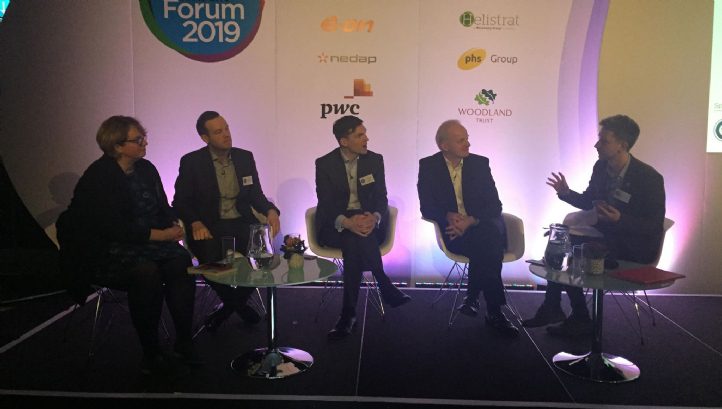 During a high-level panel discussion at Day Two of edie’s  Sustainability Leaders Forum in London last Wednesday (6 February), sustainability and energy leaders from Kellogg Europe, Whitbread, the Woodland Trust and ENGIE were asked to explain how they believe Brexit could hinder – or help – the UK business community’s sustainability ambitions and actions.

The discussion took place against a backdrop of key organisations across various sectors moving money or low-carbon production lines out of the UK, after months of deferred investment decisions and recruitment freezes.

Moreover, the green business community will most-likely be unanimous in opposition to a ‘no-deal’, which could see existing environmental standards traded off to secure better terms of trade with new partners.

The Woodland Trust’s chief executive Beccy Speight began the debate by agreeing that a no-deal Brexit would pose the risk of a “big gap” emerging in environmental legislation – around 80% of which currently comes from the EU – despite Environment Secretary Michael Gove’s continued vows to safeguard existing laws in this space.

However, due to the green community’s “absolute horror” at the way in which the Government has handled Brexit negotiations, businesses are increasingly adopting leadership positions in their approach to sustainability and future-proofing their strategies in case of a no-deal scenario, she argued.

“I think the key to action actually lies with the corporate sector, as I feel I can’t rely on the Government to do the right thing around these issues,” Speight explained.

“It is going to take pragmatism and action, which I am not seeing at scale now, but which I believe will be fundamentally important if we are to tackle some of the big issues we are facing.”

The question came after edie’s extensive survey of 250 sustainability, energy and resource professionals across all major sectors  – which was published during the panel debate – revealed that more than one-third (36%) class the UK’s proposed exit from the EU as one the of two biggest challenges for sustainable business in 2019.

“In my own experience, I would put myself in a deliberate place of conflict in my role to spark progress,” he explained.

“Smart, forward-looking organisations are now doing the same. Moreover, we need to look to businesses as being the service providers, because businesses will always make stuff work faster than policy.”

Quinn added that, despite the risk of corporates adopting short-term thinking in the face of the impending Brexit deadline, the changing demands of investors are likely to help big businesses maintain a long-term sustainability approach.

“Finance drives so much of this world and that investor piece is waking up,” he said. “I think we’ve seen a change in investor appetite around risk, from immediate and localised risk to prospective risks and wider impacts around things like extreme weather.”

Quinn’s statements come at a time when the global investment community is making strong moves to align itself with the aims of the Paris Agreement, amid growing concerns that the next financial crash will be climate-related and worse than that of 2008. Recent research from UBS, however, has concluded that Brexit worries are slowing this shift in investor attitudes within the UK.

Panellists were also asked which internal corporate responsibility practices were most likely to be affected by Brexit – regardless of which of the several potential outcomes is realised on 29 March.

Whitbread’s director of sustainability James Pitcher explained that proposed changes to trade laws have already spurred several big-name companies in the food and drink sector to “re-examine” their supply chains, bolstering their social and environmental policies in this space and moving to source products and raw materials more locally.

“The free trade that we have at the moment has done a lot of good for the economy but has made it very easy to buy things in a way that isn’t appropriate for the planet,” he said.

“At the moment, we can get things quite easily and cheaply from all over the world – but that also carries quite a large carbon footprint. If more sourcing takes place in the UK, business will be forced to adapt to a new market and adopt new ways of buying things.”

Pitcher maintained that, in the face of uncertainties surrounding developments in Westminster, corporates must not lose sight of any “potential upsides” to Brexit.

This, he explained, was largely due to the fact that sustainability is becoming increasingly “removed from siloes” and “embedded into every business decision”.

Additionally, the fact that Kellogg Europe has already made many of its sustainability commitments public will prevent it from reducing ambition in this area, Maitland-Titterton added, arguing that this will likely be the case for most other consumer-facing organisations. The company notably pledged to adopt a new CSR reporting standard, designed to give greater clarity to investors and consumers, last year.

Due to the popularity of the discussion during this panel conversation, a lot of questions from the audience were not able to be answered. However, edie has published a special, 15-minute podcast episode which sees the panel members answer pressing questions, from enabling more women to become sustainability leaders, to embedding the practice holistically. Listen to the episode below.