The HS2 project team has announced plans to create more than 120 hectares of new carbon-sequestering grassland, woodland and wetland habitats that will reuse soil and chalk from tunnel excavations. 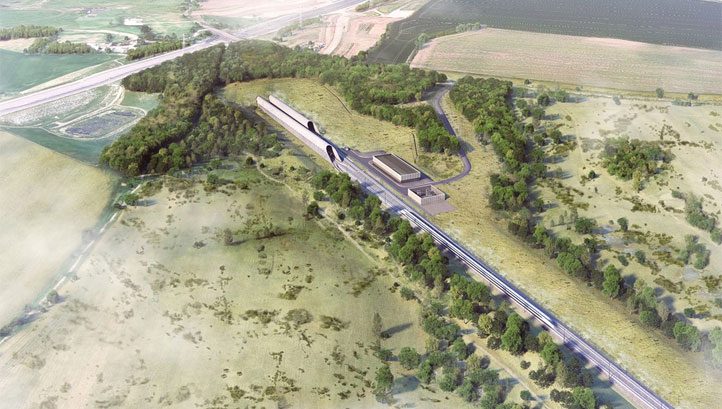 Last February, Boris Johnson approved the HS2 project, aimed at radically reducing journey times between London and the north of England. The decision has angered MPs, especially those located in areas where construction of the project is likely to destroy natural locations. The fact that the cost of HS2 has ballooned to more than £100bn has also created more detractors.

One of the key criticism of the project is the impact it is expected to have on natural habitats and the emissions associated with the project.

The Government remains adamant that HS2 will be in alignment with national climate goals, and the project’s landscape architects, ecologists, engineers and soil specialists have drawn up plans to create 127 hectares of new biodiversity hotspots.

The Colne Valley Western Slopes project will consist of 127 hectares of new chalk grassland, woodland, wood pasture and wetland habitats to improve the local environment. It will neighbour the Chilterns Area of Outstanding Natural Beauty.

Around 65,000 trees and 32 species of shrubs will be planted along with 3.5km of hedgerows. In addition, around 90 hectares of calcareous grasslands that support a rich variety of flora and has been highlighted by Natural England as being robust to the impacts of climate change, will be created.

The project will reuse existing soil and will recycle three million m3 of chalk from tunnel excavation, as well as concrete and limestone aggregate used in the construction process.

“It demonstrates HS2’s approach to addressing many of the complex issues surrounding climate change and which are central to protecting our environment, and is a great example of how good design and planning can mitigate the effects of climate change.”

HS2 claims that the project will assist with wider carbon reduction targets by delivering ecological gain and sequestering carbon. The project is yet to provide estimates on how much carbon could be sequestered. Additional carbon reductions will be achieved by reducing road haulage and waste treatment activities.

However, the project follows a history of initiatives from HS2 that have received major backlash from green campaigners.

The Wildlife Trusts’ own examination of HS2 has outlined the stark ecological damage that the project will cause.

The HS2 – towards a zero-carbon future report recommends tree planting to take place as soon as possible to help with the offsetting of both carbon emissions and wildlife destruction.