Is UK Plc ignoring climate resilience on the road to net-zero?

Last month's report from the Intergovernmental Panel on Climate Change (IPCC) provided a stark warning - that all parts of the world will be affected by physical climate impacts already 'baked in', even if we reach net-zero. So, is the UK's business community doing enough to improve climate resiliency? 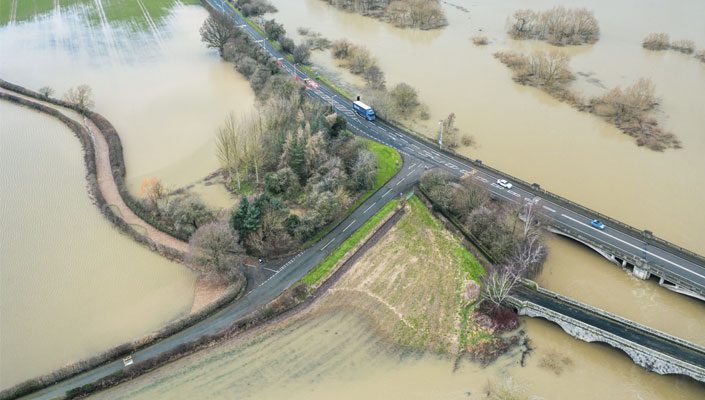 This summer has broken records for wildfires globally, as flooding swept Germany and Hurricane Ida hit the US. As authorities scramble to assist in the aftermath of these and other extreme weather events, the sustainability community is increasingly questioning how much more likely these tragedies were because of the climate crisis – and assessing how to improve resilience going forward.

The science is becoming clearer; the sixth report from the IPCC’s Working Group 1 last month confirmed that, even if the world gets on track for net-zero emissions by 2050, it will take decades to reverse global temperature increases. Other changes, including altered weather patterns, would “continue for decades to millennia”. Put simply, businesses and nations will need to ramp up adaptation plans as well as setting ambitious decarbonisation targets if humanity is to avoid the worst impacts of the climate crisis.

Businesses in the UK had already received this warning through the Climate Change Committee’s (CCC) latest assessment of climate risk two months prior. That report revealed that the cost of physical damage to could triple by 2050 without further action. The problem had already been becoming more tangible; 2020’s wheat harvest was the worst in more than 30 years and the situation wasn’t much better for barley or oats. Storm Dennis brought the worst flooding in living memory. Coastal erosion is accelerating from Brighton to Whitby.

All of this poses the question: How resilient is UK Plc to climate change?

This question does not have a straightforward answer, as it is not possible to measure resilience quantitatively using one metric (or a small set of metrics).

However, it is possible to see what proportion of businesses are measuring and reporting climate-related risks, which is a crucial foundation for the development of strategies that address the challenge at the scale and pace needed.

CDP’s global head of value chains and regional director of corporations Sonya Bhonsle tells edie: “Adaptation is not new to the UK…. As an island, we have quite a long-standing history of understanding how badly flooding and coastal changes can affect us.

“In general, businesses are pretty aware of the risk. Our work has found that about two-thirds of companies are reporting climate-related risks that have potential financial and/or strategic impacts.

“But,” she adds, “They are focusing on the short-term risks and on the regulatory risks; they’re reporting regulatory risks with a cost three times higher than physical or transition-related risks.”

This disparity in cost calculation and reporting could be closed through better alignment with the recommendations of the Task Force on Climate-Related Disclosures (TCFD). This is because the framework enables scenario analysis – assessment of risks across entire value chains at various warming trajectories. Bhonsle tells edie that, while TCFD-aligned reporting will become mandatory for some large firms from 2023 and a broader cohort of businesses from 2025, just 38% of UK businesses disclosing through CDP use the framework. Moreover, the TCFD’s own annual status reports have consistently found that the adoption of scenario analysis has been slow.

Also on the horizon is an index that will rank businesses on their overall resilience, enabling comparisons of sectors as a whole and competitor businesses within the same sectors. This tool is being developed by membership organisation Resilience First as part of the UN’s Race to Resilience campaign and is expected ahead of COP26 in November.

“At the moment, I think there are lots of targets from the UK Government, but there isn’t a lot of detail on how to get there for businesses,” Resilience First’s chief executive Mike Rooney says. “It’s a dollop of wishful thinking.

“We need something more practical than theorising, academically, about how this might be done… If we can get this [adopted] at scale, businesses will be able to compare themselves with their peer groups – their sectors. I find that businesses find this very motivating.”

It is yet to be confirmed whether the rankings will be made available publicly or kept within members. In either case, Rooney explains, they will be used to help formulate a step-by-step roadmap for improving resilience, including time-bound targets. Member businesses will be encouraged to collaborate to share ideas for delivering against these targets.

Race to Resilience first launched this January and Rooney tells edie that it will enter its next phase at Climate Week NYC, which takes place later this month. He describes the initiative as the “next step on from the Race to Zero” – the UN campaign designed to accelerate the adoption of net-zero targets which, to date, has received the support of almost 6,500 organisations.

CDP’s Bhonsle agrees with this framing. She says: “Adaptation and mitigation have been at odds for many years, and they shouldn’t be. To me, resilience is adaptation plus mitigation, at its core.

“There’s also this false premise that adaptation is largely a problem for the global south. UK companies should be looking closer to home, and they will need to look far more closely at their supply chains.”

Indeed, a recent CDP analysis found that the global business community could face environmental costs $120bn higher than planned by 2025.

The good news is that both Bhonsle and Rooney agree that the business appetite for moving adaptation up the agenda is strong. This is evidenced in that more than 600 businesses have joined a new network launched by Resilience First and the Resilience Shift earlier this year.

The problem, they concur, is a lack of knowledge on how to turn ambition into action. There are several contributing factors.

Aside from the fact that resilience is hard to measure, as outlined above, there will need to be a mindset shift in the boardroom. Long-termism will need to be adopted, as will a sense of global responsibility coupled with a willingness to deliver context-specific approaches for local communities. Additionally, appropriate levels of funding will need to be allocated to train purchasing teams, hire risk assessors, build infrastructure, accelerate R&D and, in some cases, to change business models.

“There will always be something else, then something else, and so on. It’s a continuous learning process with no end…. This is not a box-ticking exercise. Thankfully, I’ve not yet come across any executive who thinks it is.”

A further problem is policy gaps. Business’s ability to deliver adequate levels of climate adaptation relies on policy support to a certain extent. The UK does have updated plans in this area but questions remain as to whether they go far enough. Moreover, the UK is a net importer, so multinationals could be sourcing from nations with no intention of delivering plans for years to come. While this has, as Bhonsle stated, been framed as a problem for sourcing from developing nations, the EU’s own adaptation plans have been fiercely criticised.

“The biggest companies need to move now, prior to legislation,” Bhonsle urges. “We cannot wait any longer.”

The report on climate resilience has been published this week and is available to download for free.

It  examines how climate resilience and adaptation solutions are helping to safeguard some of the world’s most vulnerable committees from the impacts of the climate crisis while also shaping long-term plans to build prosperous future societies as part of a low-carbon and green economic recovery from the coronavirus pandemic.