With Recycle Week in full flow, James Rubin, chief executive of waste clearance firm Enviro Waste, highlights the huge importance of tackling e-waste in the transition to a circular economy.

It is currently the 12th annual UK Recycle Week (22-28 June), but despite the growing awareness around recycling, there is still one particular area of waste growing rapidly: Waste Electrical and Electronic Equipment (WEEE).

In 2014, the UK generated the second highest amount of WEEE in Europe in terms of quantity and only 2% of e-waste is re-used although 23% is suitable for reuse. Around 25% of WEEE taken to household recycling centres could be re-used and this could be worth about £200 million annually.

This area is particularly important as up until recently, WEEE items had not been recycled. In 2003, the European WEEE Directive became European law and set collection and recycling targets to reduce the impact of e-waste but the amount is increasing at a rate of 3-5% per year. The UK generates around 23.5kg of WEEE per person, placing it in the top five 'per-capita' WEEE producers.

Between 2000 and 2012, the proportion of UK residents recycling had risen by 32% but recently the recycling rate flat lined to a 0.1% increase per year. If this rate continues, the UK will be unable to meet the EU’s target of 50% recycling by 2020.

The European WEEE Directive aimed to set a minimum target of four kilograms per head per annum to be recycled but by 2019 this is planned to be increased five times. The UK and EU legislation implemented for WEEE affects the majority of UK businesses therefore rapid adaptation is required to keep up with increasing WEEE targets.

The Department for Business, Innovation & Skills (BIS) has set a collection target of 506,878 tonnes of WEEE in 2015, a 16% increase from 2015. In the first quarter, 125,081 tonnes were collected, which is a promising start and shows growing awareness, but we need to keep that momentum going and encourage others.

The WEEE Regulations became UK law in 2014 and cover various items from fridges and irons to PCs and lamps. These regulations cover the equipment included, targets, those affected, exemptions and proper procedure for treatment and re-use. From January 2019, the law will be expanded to include even more items.

In the UK, over 300 million tonnes of waste is produced annually, two million of which is WEEE. This is particularly important with WEEE items as e-waste is made up over 1000 substances overall. These can be toxic to the environment but can also cause severe health concerns.

The main WEEE issues at the moment, according to the International Labour Office, are the extremely high volumes being generated because of the demand for new technology, the hazardous composition of these materials; the complex design of items which makes them difficult to recycle, the financial incentive to dispose of the items properly and the lack of international regulation.

However, regulation is being updated and the introduction of formal recyclers is helping. Furthermore, the financial incentives are increasing with the rise in value of WEEE materials like gold, copper and plastic. A recent report from the United Nations has revealed that the value of these materials being recovered is around £34.5bn. Nevertheless, there is much more to be done; a study from the Circular Economy Task Force, formed by Green Alliance, found that outdated recycling systems could be losing the UK economy an estimated £1.7bn every year. Instead of the current fragmented approach to waste management, an overall strategy is needed.

In the last half century, global population has increased by 50% but resource usage has increased by 1000%. Currently, we work as a linear economy where items which are used are usually then disposed, this is especially an issue with technology. For example, when a new phone comes out, someone bins their previous version. In 1997, the average lifespan for a computer was six years and since then it has decreased to around two.

The circular economy is an idea encouraging reuse and recycling of finite resources, suggested by the Ellen MacArthur Foundation. This economic model is intended to redesign infrastructure in order to ensure that waste does not exist. A move to this system could add potentially 10,000 jobs to the UK economy.

What needs to change and how?

In order to reach a circular economy that does not produce the amount of waste that we currently do, there are many options for both households and businesses. As a society we need to rethink our position on many resources and try and keep value. We need to focus on sustaining instead of consuming.

Innovation in product design could greatly help WEEE recycling if it assisted in making the design of equipment less complex. For example, if something is bolted, screwed and soldered together it is going to be considerably harder to recycle. These companies could also potentially also keep ownership and simply license out their products for periods of time. This means that afterwards the technical and biological materials will come back to the company and they can reuse it efficiently. Manufacturers can also help extend their product’s lifespan by making information about repairing it more freely available.

As a user of these items, it is important to maintain product quality as much as possible and treat these items well as they are made up of finite resources. We can reuse them or redistribute them to other people so they are not wasted. WEEE could potentially also be refurbished and repaired but if we have no need for them anymore, perhaps they could be upcycled or recycled to create something new. For instance, recycling can save up to 95% of the energy that would have been used to make aluminium from raw resources.

As a businesses, there are many ways to contribute to a sustainable circular economy and work to build a long term system/process. Sourcing sustainable materials can be a key way for businesses to help the environment but it’s also vital for companies to avoid harmful and damaging practices like sending WEEE items straight to landfill, fly-tipping, illegal exportation and burning of e-waste.

Upwards of 50% of businesses do not recycle WEEE, but landfills are filling up and the number of operating sites is decreasing monumentally. Many companies use incineration as an alternative but the complicated mixture of materials in e-waste makes it an even less environmentally friendly option than usual. Rather than using these practices, we need to work towards a globally environmentally friendly solution. 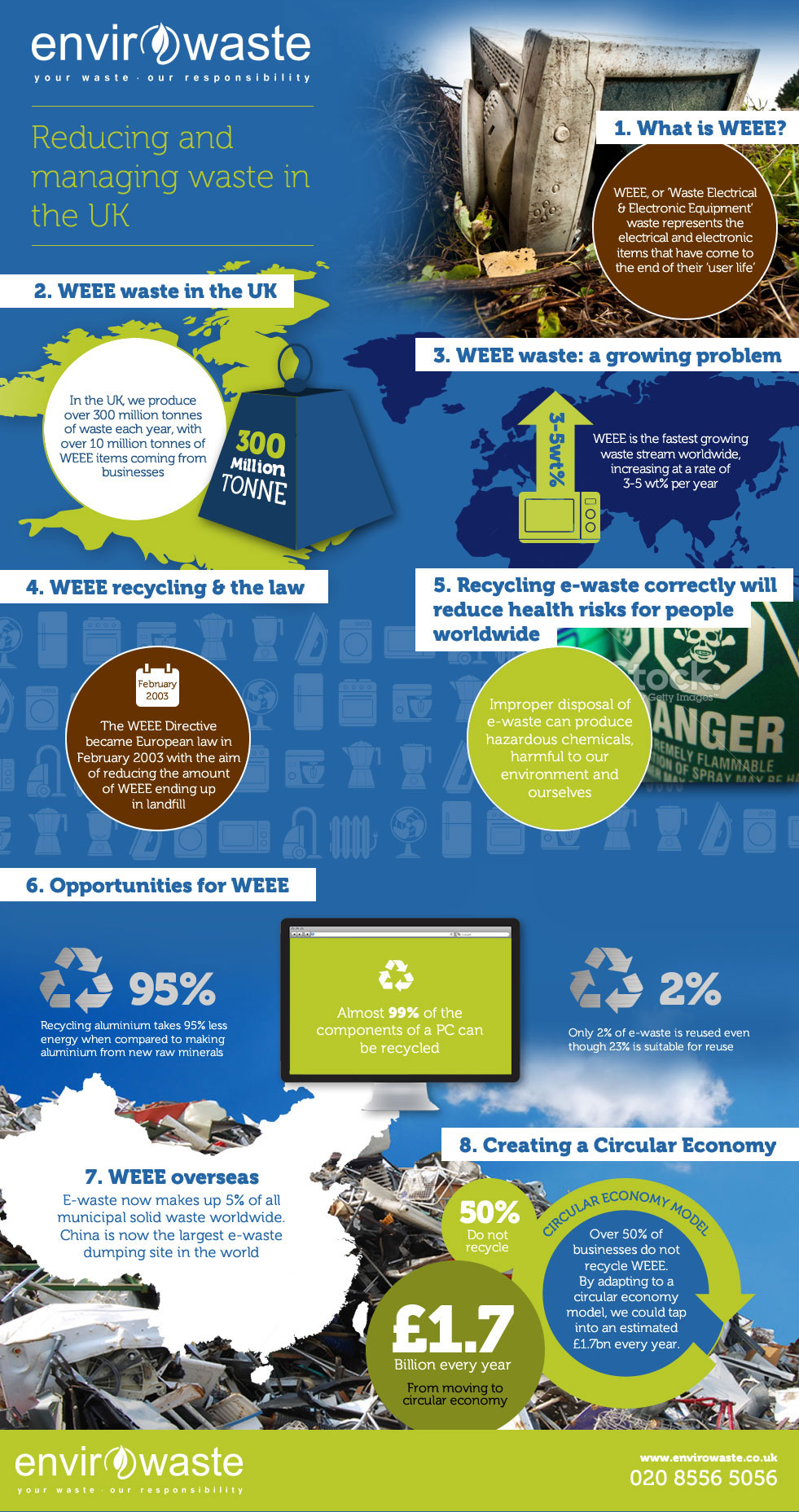