What will the future of energy look like? Will we all be driving cars powered by solar energy from space, living in wind-powered homes and working in waste-powered offices?

The outcome of the recent UN climate talks in Lima was deemed lacking by many green groups who claim agreements are not enough to address the current climate crisis and a lack of direction has doomed the world to a 6C average temperature increase.

In this case, prevention is definitely better than cure. A major shift towards renewables is the only way to preserve the world's resources and keep the temperature increase below 2C.

Edie has gathered together some of the weirdest and most inventive renewable energy concept vehicles and buildings from around the world to help ameliorate the situation. Here's to a green 2015 and beyond!

The BMW Lovos is a concept car designed by Anne Forschner, a graduate of Pforzheim University in Germany.

The body is made up of 260 moveable solar panels which turn to follow the sun, constantly harnessing energy to recharge the vehicle's electric drive system. 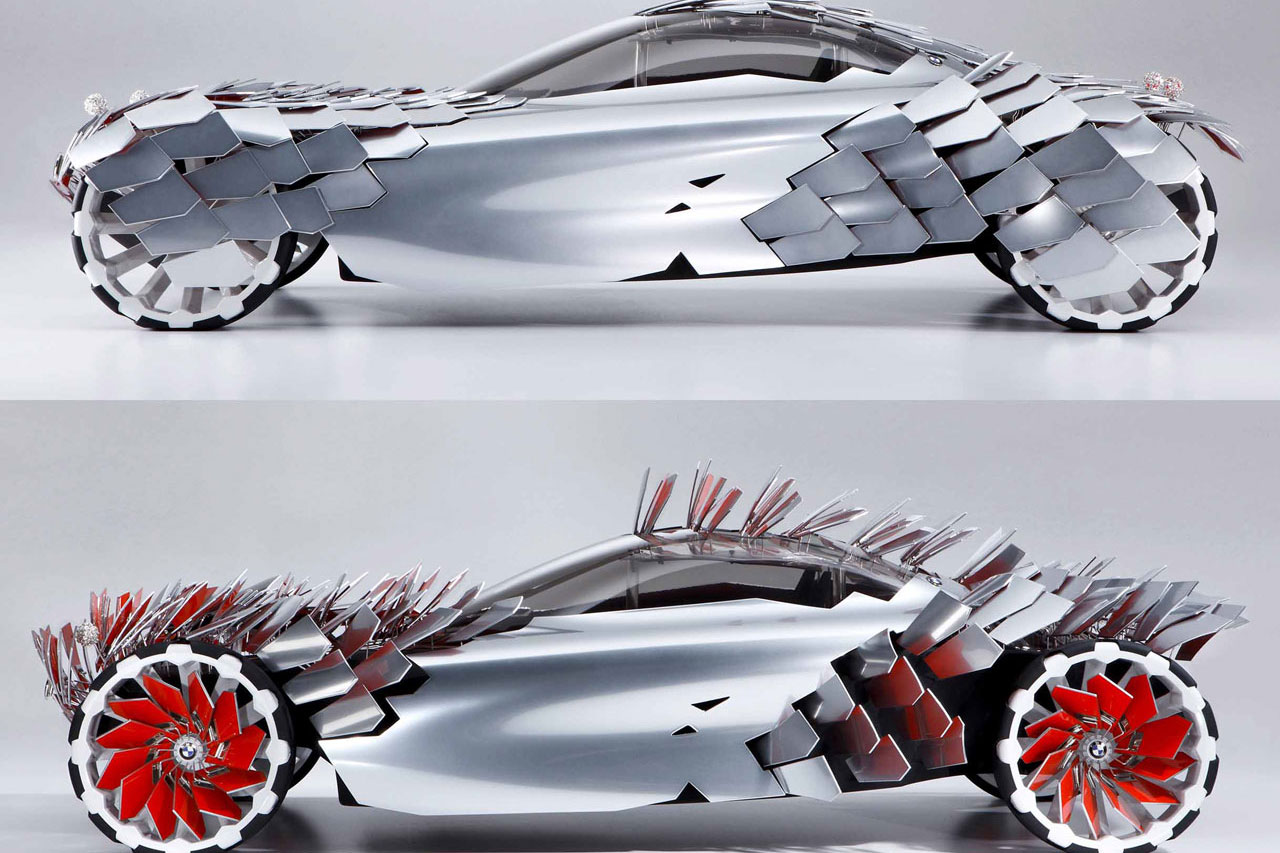 SKhy is an unmanned shuttle bus, who's name stands for Solar and Kinetic energy to produce hydrogen, drawn up by designer Alan Monteiro.

The bus acquires energy from solar cells laid out across its roof and processes wastewater to produce hydrogen.

The chassis is made from lightweight aluminium and the bus is of aerodynamic design, meaning it doesn't require much energy to power it.

Seats are made from recycled polyester from water bottles. 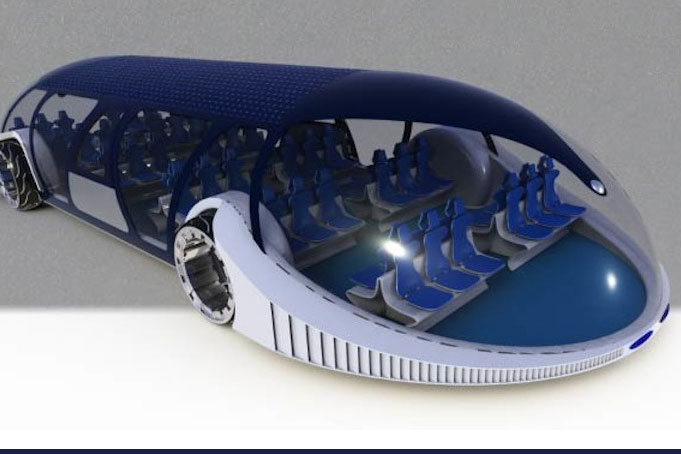 The Ecologic Aircraft was designed by industrial designer Daphnis Fournier as an environmentally-friendly form of air travel.

Photovoltaic cells cover its large roof which generate electricity to power the aircraft.

The majority of an ordinary aeroplane's energy is spent on take-off, by attaching a balloon to the top of the craft, a great deal less energy would be consumed at this time.

A streamined shape allows the craft to travel quickly. It also has four large electric turbines. The plane is capable of transporting 216-324 passengers. 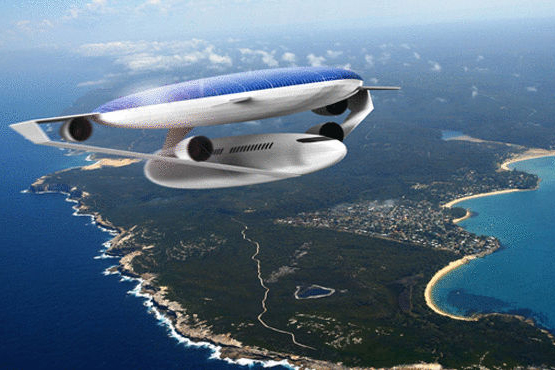 Optimum energy efficiency is achieved through efficient insulation, converting kinetic energy into electrical energy and clean energy production through the use of solar and wind power.

Energy requirements are kept low and energy available inside the building is retained.

Kinetic energy from building-users is collected and converted into electrical energy.

Sewage, municipal waste, and paper are chemically converted into energy.

Any additional energy is generated via solar cells integrated into the building; small, noiseless wind turbines; and algae that are converted to biogas. 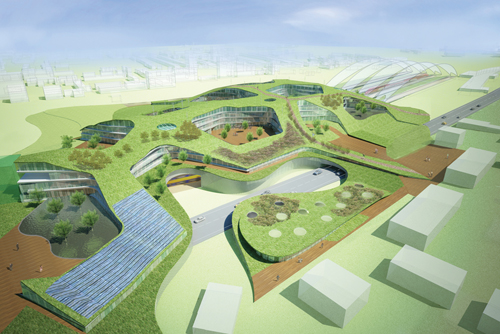 Belgian architect Vincent Callebaut was commissioned by private Chinese investors to develop the concept of a ‘vertical city’ made up of six ‘farm-scrapers’.

These examples of biomimicry comprise a kind of urban habitat which produces more energy than it consumes.

A steel structure creates the curved shapes which are stacked up and house entire communities of people, living and working in the same building to cut transport emissions.

Solar panels and wind turbines are mounted on the outer surfaces to produce energy which will power the city. 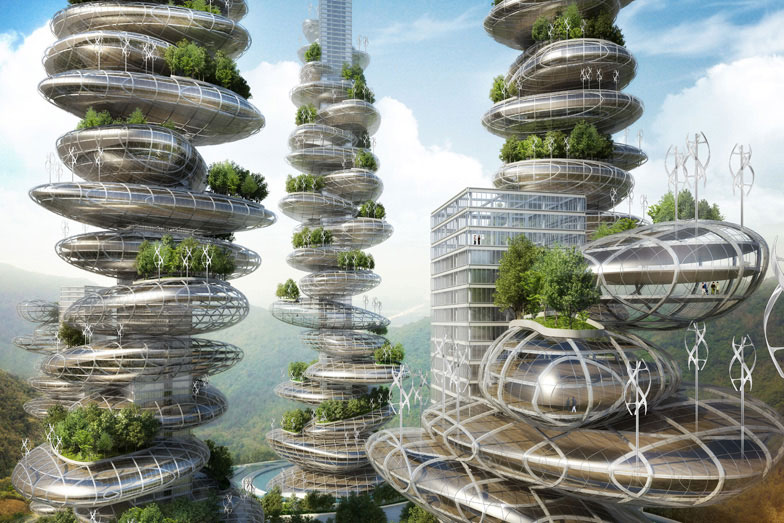 The Island is an entirely self-sufficient energy generator and uses solar energy as its sole source of power, actively contributing to cutting harmful greenhouse gases.

Puzzolante's concept is made up of a 15mm outside-skin and a 15mm inside-skin in reinforced fiberglass. Thin films of photovoltaic are integrated into the two skins to absorb sunlight energy from the outside and artificial lighting energy from the inside.

Any excess energy is stored in lithium-ion batteries.

Composed of reinforced concrete and steel, the floating platform on which the structure sits is tethered to the seabed, restricting its movement in depths of up to 2km.

Deep ocean water is pumped into the prison hold where it is stored and then released from a height over Tyson Turbines floating below, converting gravitational potential energy into kinetic energy, which gets converted into electricity. 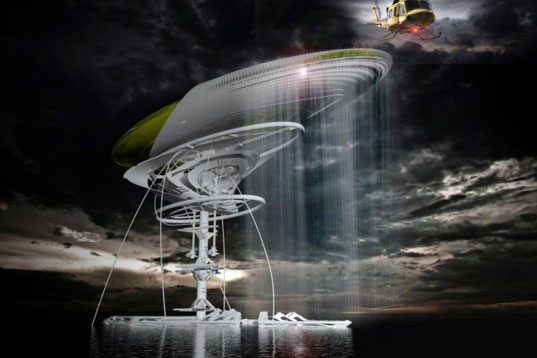 Solar Wind was the brainchild of Italian architects Francesco Colarossi, Giovanni Saracino and Luisa Saracino as part of a competition to design a use for disused viaducts.

26 wind turbines generating 36 million kWh per year are built in the spaces between the pillars of the viaduct.

The 'solar park' stretches the full length of the inner carriageway, transforming it into a green 'promenade' which incorporates self-sufficient solar greenhouses.

The road asphalt on the 20km outer carriageway is replaced by solar-powered panels which produce 11.2 million kWh per year. 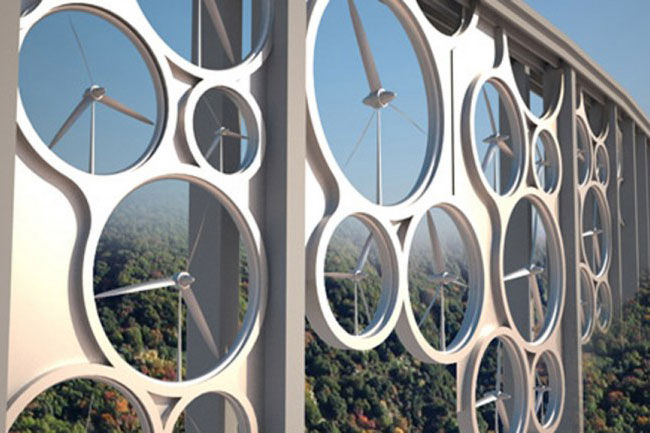 Energy Island is a concept spearheaded by architect and engineer Dominic Michaelis comprising an artificial floating hexagonal 'island' of 234,000m2.

The island is designed to harness energy from sea currents, waves, solar and wind, to produce electricity and clean hydrogen fuel by electrolysis, with the additional function of desalinating seawater.

The hexagonal shape allows the unit to be linked to other islands and a large area ensures stability in rough seas.

Michaelis predicts that a group of eight units would collectively generate 2000MW - the approximate output of a large nuclear power plant and enough to power a small city. 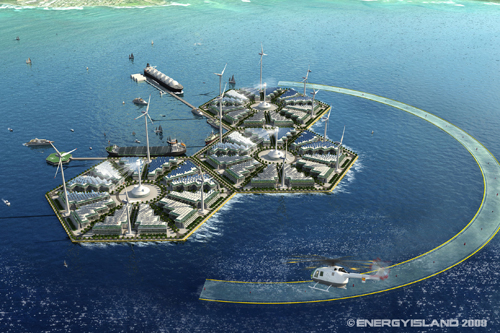 Researchers at the Japan Aerospace Exploration Agency (JAXA) suggest that space-based solar power could become a reality within the next 25 years.

The agency plans to develop a 1GW commercial solar power system, an output equivalent to a typical nuclear power plant, as early as 2030.

Space-based solar collectors in geosynchronous orbit would be capable of generating power nearly 24 hours a day. 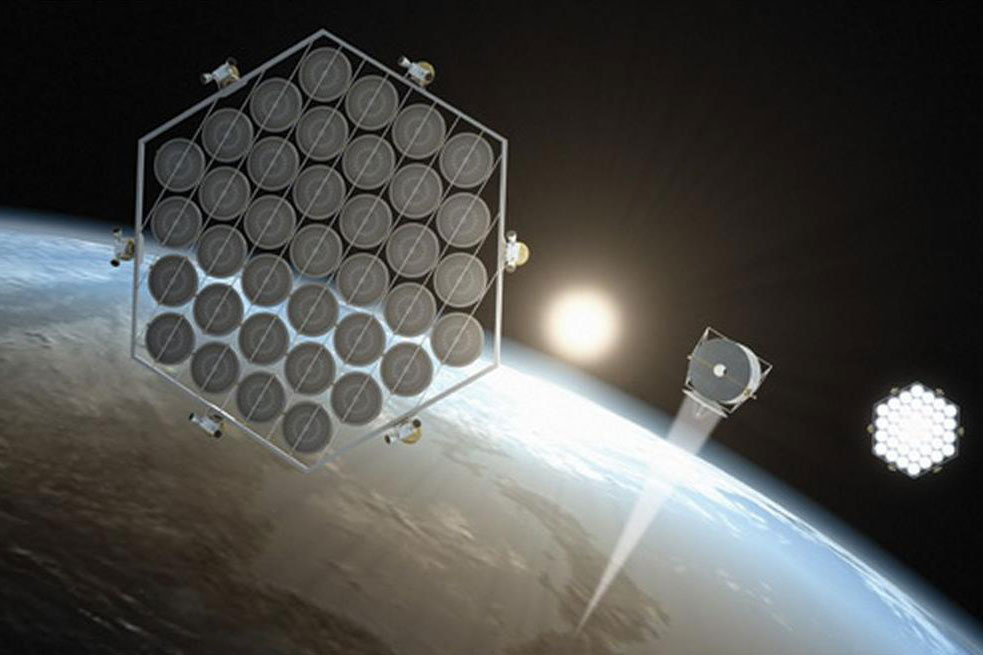