Game on: How gamification is bringing sustainability to the masses

How can a business motivate its customers and employees to become more sustainable whilst entertaining them? The answer: gamification.

Gamification is the concept of using a game or activity to educate and engage people to do something they might not otherwise do. The theory has been used with great success in several sectors - notably fitness, with tools like Nike Tag and Wii Fit turning would-be couch potatoes into fitness fanatics.

In recent years, big companies have started turning to gamification to enhance their sustainability efforts; trying to generate behaviour change in their employees and customers.

For example, Unilever recently developed the Waterworks app which connects those living in water-stressed areas to people making charitable donations. The app allows donors to see the direct benefits of their money, theoretically inspiring greater generosity.

Microsoft has also turned to gamification to raise awareness of global water shortages, creating the One Drop of Life app, where players have to navigate a water droplet through a maze of twigs, leafs and toxic waste.

At the end of each round of the game, a factoid bubble appears, detailing a fact about water issues worldwide. "We want to empower everyone on the planet through technology and, ultimately, improve all aspects of people's lives,” explained Microsoft’s chief marketing officer for Western Europe Christian Frei.

But gamification is not just being used as a vehicle for firms’ CSR outreach programmes. US food chain Chipotle created its popular Scarecrow game as a way to publicise the sustainability of its food supply chain. Users play the role of a farmer who becomes more successful by using more natural and sustainable ingredients. A Youtube video accompanying the game has been viewed 14.5 million times.

Gamification is also increasingly being utilised in-house, with companies turning to games to influence their own employees and inform sustainable decision-making.

Aanand Davé, a researcher at the EPSRC Centre for Innovative Manufacturing in Industrial Sustainability, is at the forefront of this movement. Davé has spent the last two years developing simulation games as a way of encouraging clients (mainly manufacturers) to implement the energy-saving measures he identifies through factory eco-efficiency modelling.

Davé explains: “It’s one thing to go into a factory and say these things could be improved, but if a company can see the issue for itself, and see how they can fix the problem and how much energy they can save, they’re much more likely to make the changes. The implementation rate is much higher when the companies spot the issues themselves.”

His simulation games are visual representations of a factory, where managers can tweak various inputs or processes and see how it affects energy use or raw material inputs.

“We realised a lot of companies may not have the money or the expertise to invest in modelling, so we wanted to gamify some of those things in a way that allowed people in the factory to directly impact change without having to invest lots of time and money," adds Davé.

“The idea was that we could show them for example, that changing all your lighting to LEDs has this average payback and here’s the cost of implementing it.”

Figure 1: A visualisation of Davé’s model for a foundry 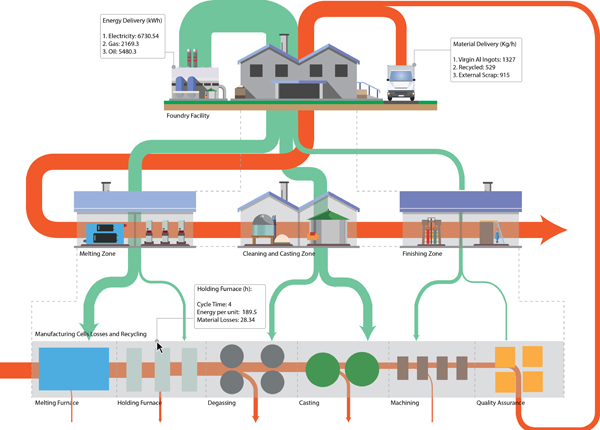 Davé, who has also worked with Airbus and Saitex, said that one of the best examples of his simu-game in action was a recent project with the Jaguar factory in Solihull. Working on behalf of the EPSRC Centre alongside energy-saving specialist Ecopare, Davé identified around £36,000 of annual savings in the factory’s painting system alone.

Jaguar representatives were initially reluctant to install one of the key features of the energy-saving plan – LED lighting –  because of concerns about losing quality in the final painting process. But, with the help of the simu-game and some trial lights, the LED bulbs were installed, saving money, energy and actually reducing the amount of painting defects by 10%.

And, according to Davé, there could have been another hidden bonus from the LEDs. “I don’t know if it was directly related,” he says. “But they also had staff sick days reduced, because the heat in that area was two or three degrees lower thanks to the efficient lights."

So far, Davé and the Centre have been making bespoke games and simulations for individual companies, but he recognises the opportunities of creating a more generic game that can teach managers and workers the basics tenets of eco efficiency.

“It’s early days for simu-gaming, but there’s definitely a bright future ahead,” he says.

More information on Aanand Davé’s work can be found here.