As we fast approach one of the most important climate change meetings of our generation, a host of celebrities from Leonardo DiCaprio through to Gary Neville (yes, really) are using their mighty influence to broadcast the issue of global warming and push for a strong global deal in Paris.

From boyband-obsessed teenage girls to pint-guzzling football ultras, everyone has a role model; someone they admire, someone they respect and someone they’ll listen to. Celebrities have the power to ignite behaviour change among the masses, often in just 140 characters.

What better way to use this power than to raise awareness and call for urgent action to tackle global warming? Especially as we sit on the precipice of the UN COP21 climate conference - arguably the most important meeting of world leaders in the history of mankind.

In the run-up to Paris, numerous Hollywood A-listers, musicians and athletes have got a whole lot more vocal about the planet we live on. So here at edie, we’ve taken a sample of these familiar faces that all have a similar message to spread. These celebrities may not actively be "green", but they still have tremendous potential to wade in on environmental issues... 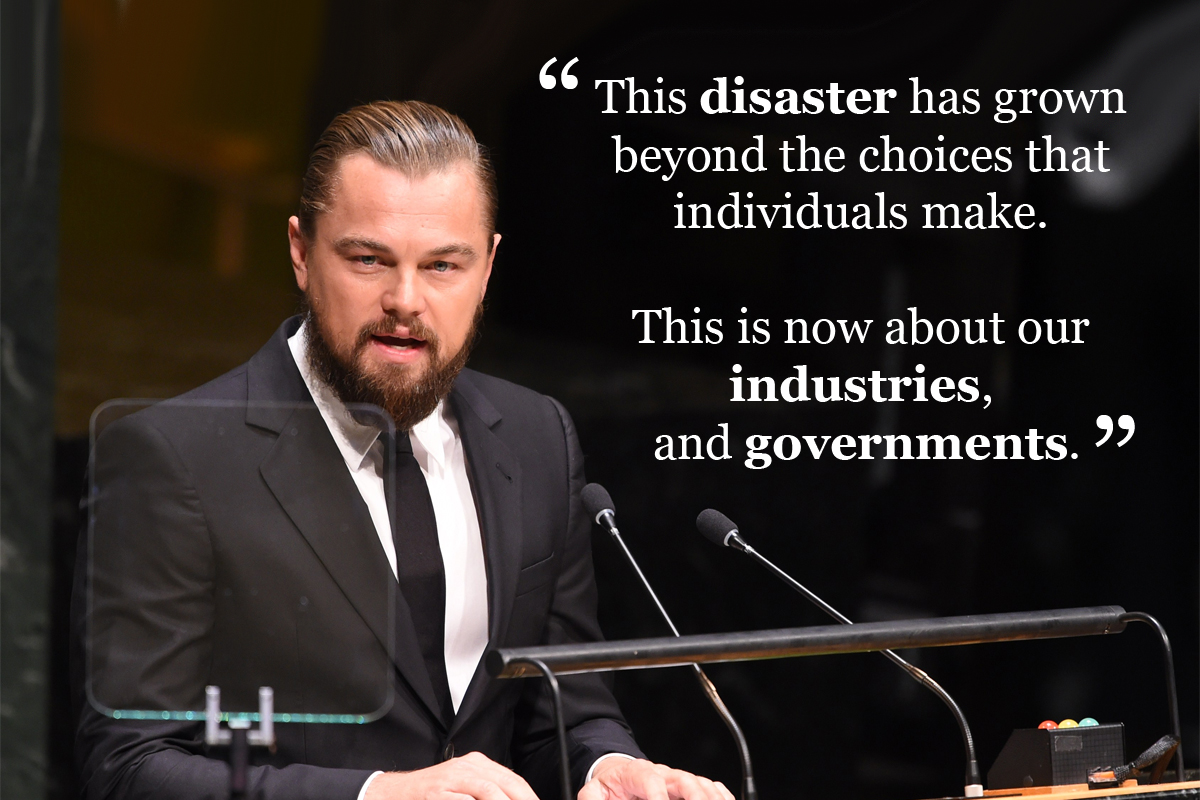 Named as a United Nations Messenger of Peace, DiCaprio is leading the celebrity climate change movement; addressing the key climate issues at UN summits and recently pledging to divest his personal wealth and charitable foundation's fund from fossil fuels into a divestment drive. And if that isn't enough, he's planning to to create 'the world's most sustainable island resort', which will be 'Triple Net Zero'. 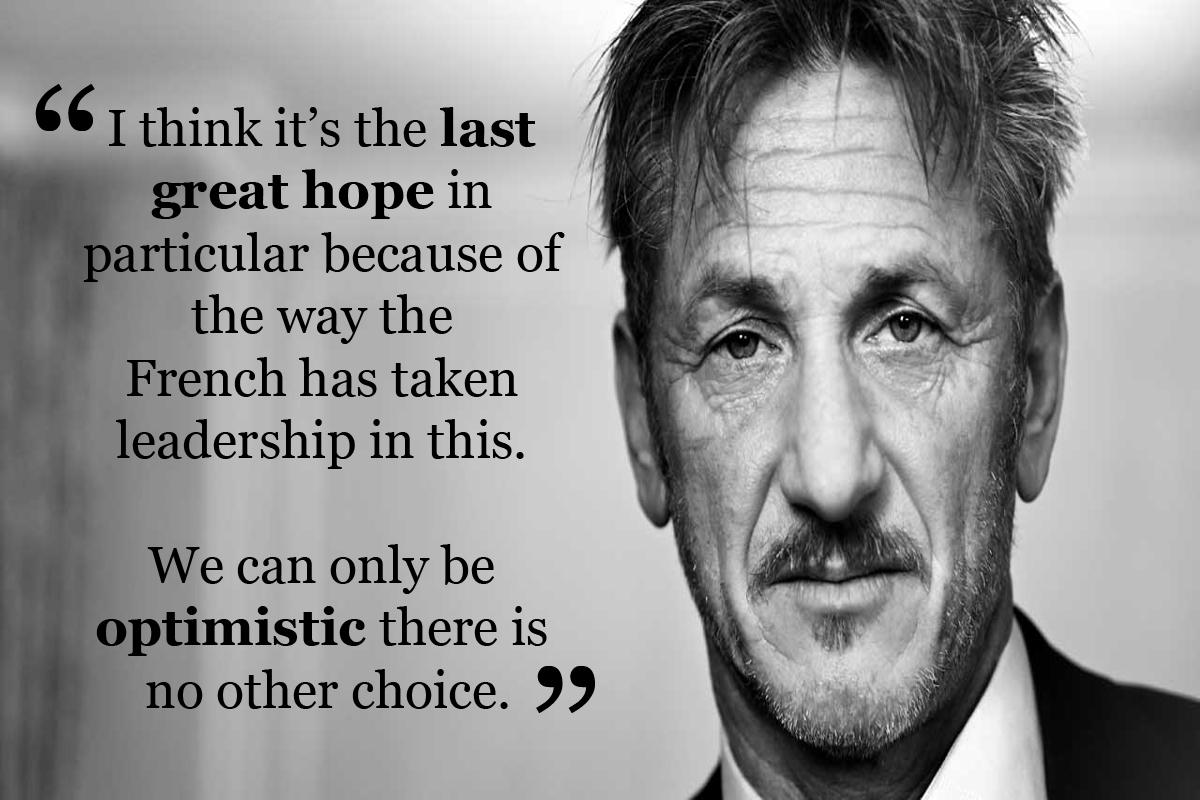 Hollywood actor Penn is extremely optimistic about the UN climate change conference and has encouraged others to share his enthusiasm for the future of our planet. Penn was in Paris last weekend to meet the French Minister of Ecology, Sustainable Development and Energy Segolene Royal, where he discussed climate issues and aimed to secure more aid for Haiti. 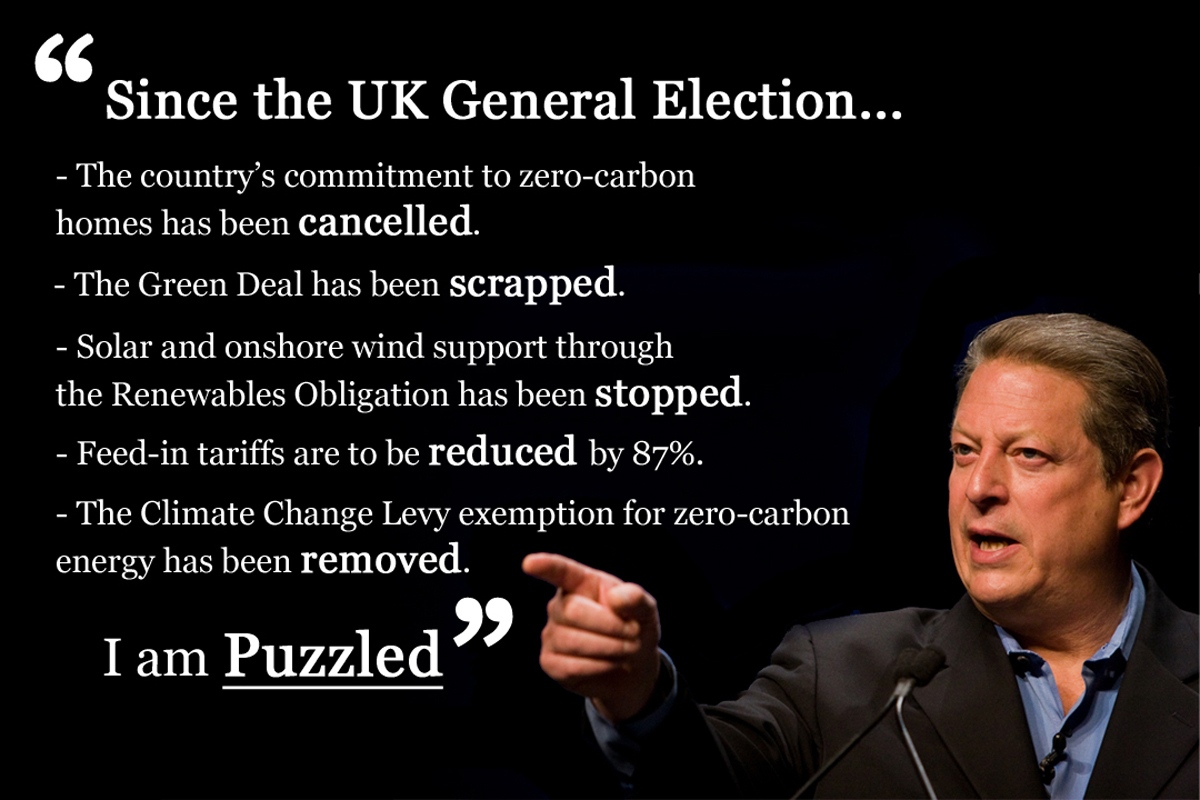 The Former US Vice-President, famously trumpeted the issue of climate change a decade ago with the film ‘An Inconvenient Truth’ and hasn't relented in his battle since. Gore has been critical in calling on the UK Government to re-stabilise energy policy and take the helm of climate leadership. He also established Generation Investment Management a business responsible for funds of $12bn (£8bn), focused on investments that are positioned in anticipation of a dramatic transformation in the energy industry. 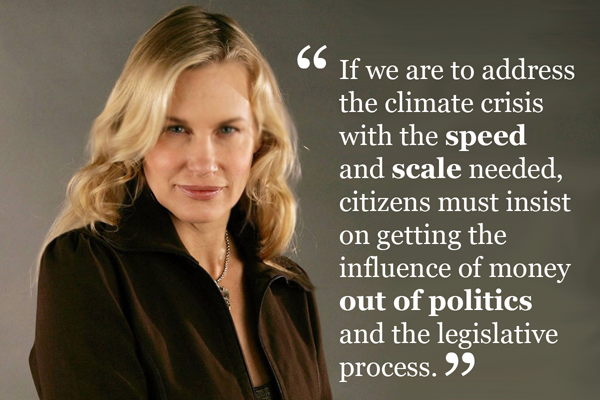 Not one to shy away from controversy, the actress and director has hit the headlines for her climate activism, and was once arrested due to her vocal protests and marches to promote the cause. Hannah has also tried to push her climate views into film and television acting as executive producer for 'Greedy Lying Bastards' - a 2012 documentary about the corporation-led campaign behind climate change denial. 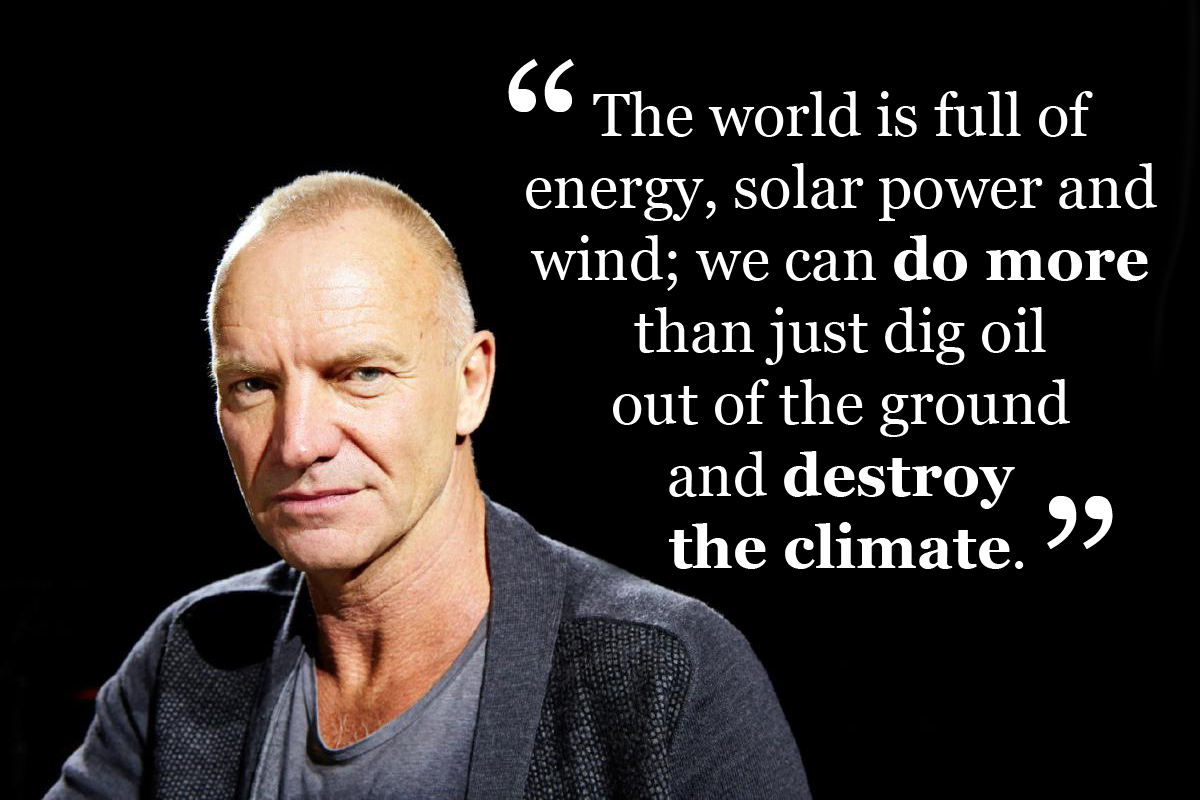 The singer was a constant in the media spotlight at the People’s Climate March in New York City last year. Reporters and photographers alike flocked to Sting as he questioned President Obama’s - and everybody else’s - efforts to tackle climate change. Sting has also grown weary of corporations masquerading as climate activists, despite little tangible proof that they are helping. 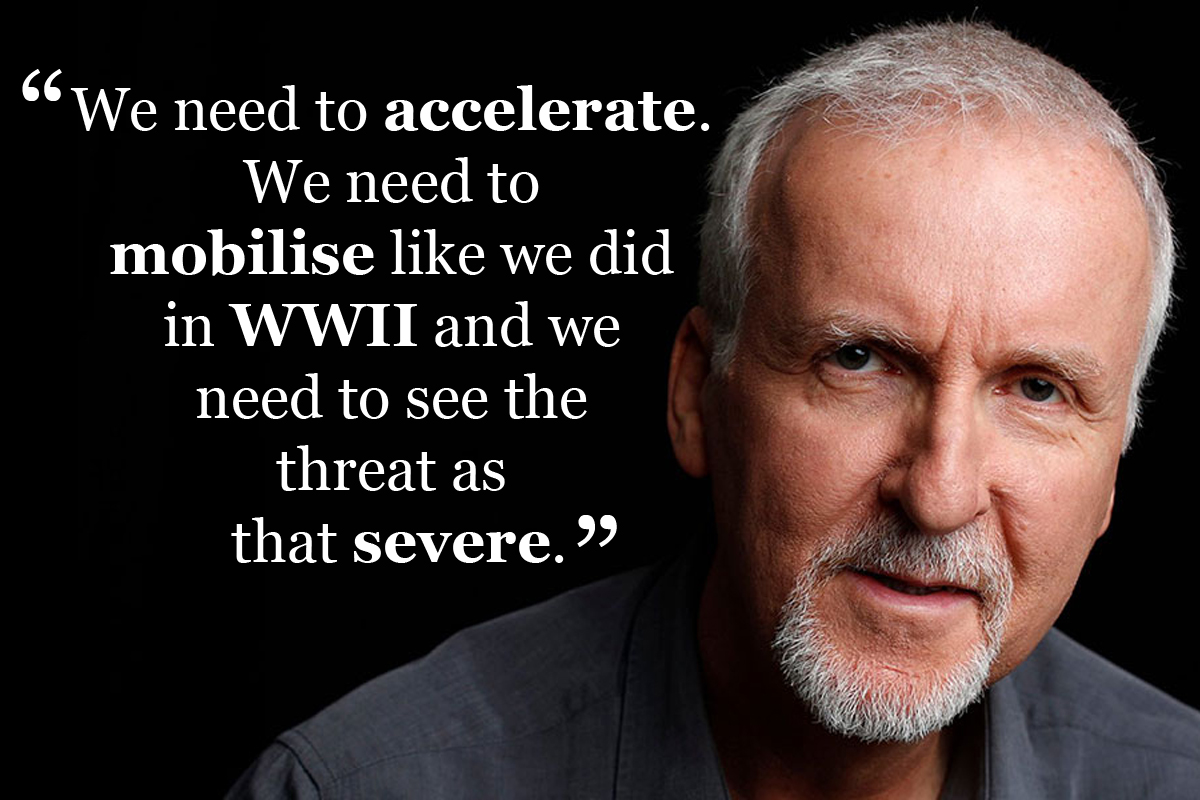 The film director clearly has an idea of what will happen to the earth if the current domination of fossil fuels continues. His blockbuster movie Avatar depicts the native’s battle of an overpopulated world being exploited for valuable resources. Cameron has previously launched the 'Years of Living Dangerously' series, aimed at showing the devastation that climate change can cause, while also seeking solutions - including his owntake on solar panels. 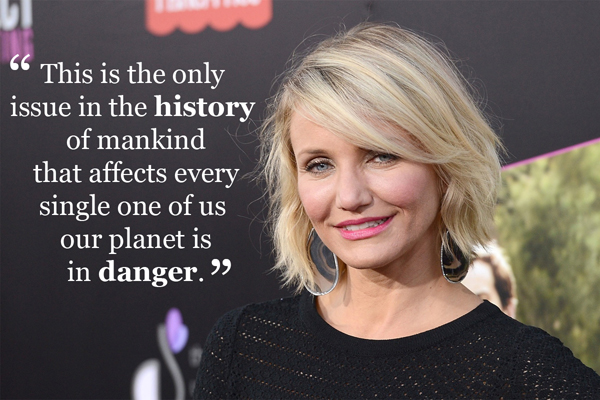 An avid promoter of Al Gore’s Live Earth event which brings the world together through music artists and influencers for a day of global action on climate change, Diaz has shifted the stereotype of how an environmentalist is portrayed. Through her personality she is reinforcing the concept that being green is becoming a fashionable necessity, notably by becoming one of the first celebrities to endorse and drive a hyrbid car. She made headlines by arriving at the Academy Awards in a Toyota Prius. 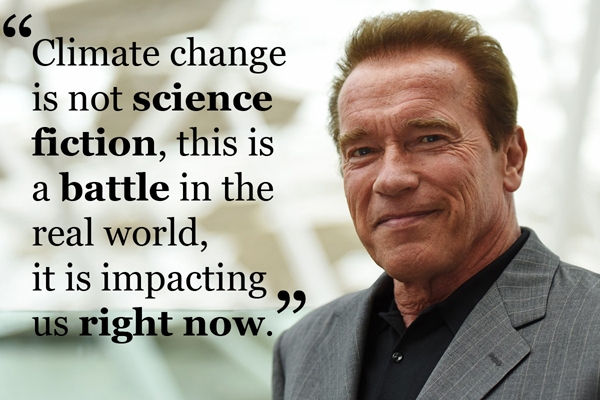 The Terminator star has battled an array on sci-fi enemies on the silver screen but the 38th Governor of California knows that climate change is one of the most severe threats that our world faces. Schwarzenegger was chosen by the French government to join Nobel prizewinners, philosophers, UN secretary generals, spiritual leaders and theologians to make the moral case for the world to act urgently on climate change. 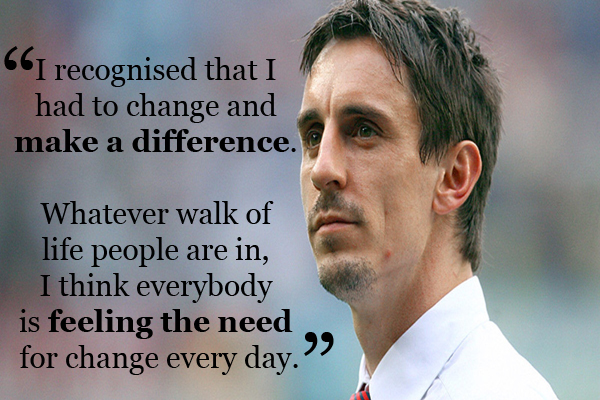 Arguably not as glamorous as his counterparts, Neville is doing a stellar job at bringing sustainability issues to the fore within the huge global industry of sport. His £8m 'eco-mansion' in Lancashire, which he plans to make carbon-neutral, runs off of a ground-source heat pump, sustainable rainwater harvesting and photovoltaic cells. Neville also recently teamed up with Ecotricity to launch the Sustainability in Sport initiative, which encourages sports clubs to change the way they live and play. 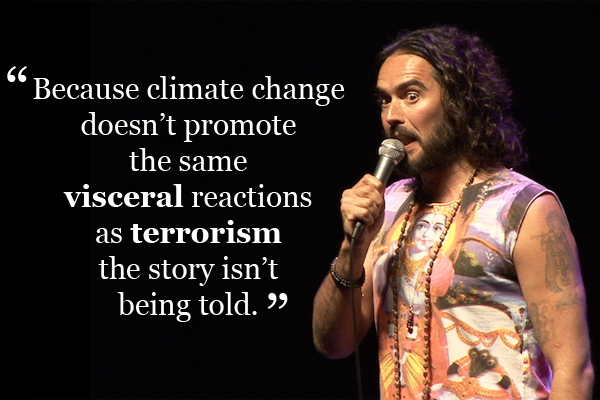 A notorious activist by trade, the actor and campaigner has been known to buck the trend, calling for revolutions and a complete re-establishment of the status quo. Beneath his hectic, garrulous presentation style on hit web series 'The Trews', Brand displays a genuine understanding of current political issues surrounding climate change and wasn’t afraid to throw punches, calling out the media for its dormant portrayal of the subject.

Norton is on the board of Conservation International and president of the US Board of the Maasai Wilderness Conservation Trust. In 2010, he was appointed United Nations Goodwill Ambassador for Biodiversity by Secretary General Ban Ki Moon. His commitment doesn’t just extend to titles and ambassadorial roles - the actor, famed for Fight Club and the Incredible Hulk, can be seen battling climate change deniers in the form of public marches. 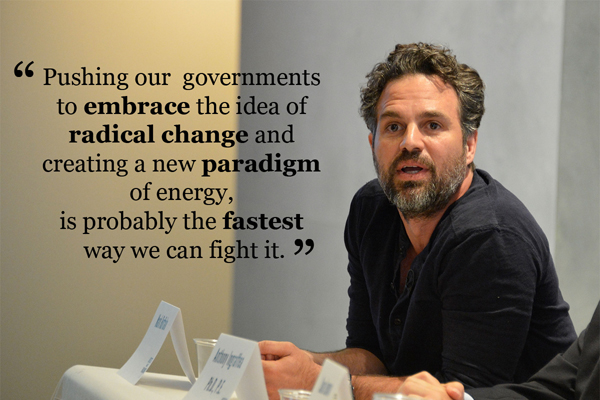 Speaking of the Incredible Hulk, the latest actor to portray the giant green brute also shares Norton’s interest in going green to protect the planet. The actor has written numerous guest blogs about climate change, denoting his first-hand experiences and beliefs about the issue. Ruffalo spreads the more mundane climate stories of company pledges and sustainability management and adds a bit of A-list glamour, increasing awareness in the process.