Governments dither on the solution to global warming - but the Montreal protocol is a reminder of a time when they took their hands out of their pockets.

In The Magnificent Seven Deadly Sins, a comedy made in 1971, Spike Milligan portrays Sloth as a tramp trying to get through a farm gate. This simple task is rendered almost impossible by the fact that he can't be bothered to take his hands out of his pockets and open the latch. He tries everything: getting over it, under it, through it, hurling himself at it, risking mortal injury, expending far more energy and effort than the obvious solution would require.

This is how environmental diplomacy works. Governments gather to discuss an urgent problem and propose everything except the obvious solution - legislation. The last thing our self-hating states will contemplate is what they are empowered to do: govern. They will launch endless talks and commissions, devise elaborate market mechanisms, even offer massive subsidies to encourage better behaviour, rather than simply say "we're stopping this".

This is what's happening with climate change caused by humans. The obvious solution, in fact the only real and lasting solution, is to decide that most fossil fuel reserves will be left in the ground, while alternative energy sources are rapidly developed to fill the gap. Everything else is talk. But not only will governments not contemplate this step, they won't even discuss it. They would rather risk mortal injury than open the gate.

The same applies to biodiversity, fisheries, neonicotinoid pesticides and a host of other issues affecting the living planet: negotiators have tried to work their way under, over and through the gate, while ensuring that the barrier remains in place.

It wasn't always like this. There was a time when they took their hands out of their pockets.

This week the UN revealed that the ozone layer is recovering so fast that, across most of the planet, it will be more or less mended by the middle of the century. Ozone is the atmospheric chemical that blocks ultraviolet-B radiation, protecting us from skin cancer and from damage to our eyes and immune systems, and protecting plants from destruction. It's coming back, and this is a great advertisement for active government.

Like human-induced global warming, the problem was forecast before it was observed. In the case of global warming, Svante Arrhenius predicted in 1896 that the "carbonic acid" (carbon dioxide) produced by burning fossil fuels was sufficient to raise the global temperature. 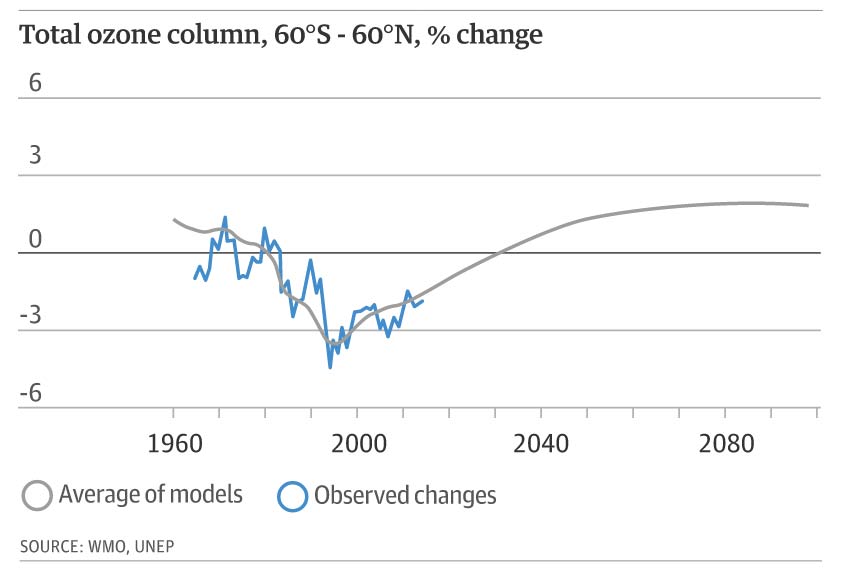 In 1974, before any noticeable issues had arisen, the chemists Frank Rowland and Mario Molina predicted that the breakdown of chlorofluorocarbons - chemicals used for refrigeration and as aerosol propellants - in the stratosphere would destroy atmospheric ozone. Eleven years later, ozone depletion near the South Pole was detected by the British Antarctic Survey.

Had governments not acted, the UN estimates: "Atmospheric levels of ozone depleting substances could have increased tenfold by 2050."

The action governments took was direct and uncomplicated: ozone-depleting chemicals would be banned. The Montreal protocol came into force in 1989, and within seven years, use of the most dangerous substances had been more or less eliminated. Every member of the United Nations has ratified the treaty.

This was despite a sustained campaign of lobbying and denial by the chemicals industry - led by Dupont - which bears strong similarities to the campaign by fossil fuel companies to prevent action on climate change.

The Montreal protocol is one of those victories that allows us to forget. We are not wired to recognise an absence; we don't spend our days celebrating the eradication of smallpox, or the fact that diphtheria no longer ravages our cities. But were the protocol not in force, scarcely a day would pass when the problem did not impinge on our consciousness. The UN maintains that the protocol "will have prevented 2 million cases of skin cancer annually by 2030".

There are still issues to resolve. Earlier this year, scientists detected four new ozone-depleting chemicals in the atmosphere, which are likely to be either industrial feedstocks or black market products. There will always be cheats and freeloaders, but the treaty can keep evolving to address new threats.

The Montreal protocol has famously done more to prevent global warming (which was not its purpose) than the Kyoto protocol, which was designed to prevent it. This is because some of the chemicals the ozone treaty bans are also powerful greenhouse gases.

So what's the difference? Why is the Montreal protocol effective while the Kyoto protocol and subsequent efforts to prevent climate breakdown are not?

Part of the answer must be that the fossil fuel industry is much bigger than the halogenated hydrocarbon industry, and its lobbying power much greater. Retiring fossil fuel is technically just as feasible as replacing ozone-depleting chemicals, given the wide range of technologies for generating useful energy, but politically much tougher.

But I don't think that's the only factor. When the Montreal protocol was negotiated, during the mid-1980s, the notion that governments could intervene in the market was under sustained assault, but not yet conquered. Even Margaret Thatcher, while speaking the language of market fundamentalism, was dirigiste by comparison to her successors: enough at any rate to be a staunch supporter of the Montreal protocol. It is almost impossible to imagine David Cameron championing such a measure. For that matter, given the current state of Congress, it's more or less impossible to see Barack Obama doing it either.

By the mid-1990s, the doctrine of market fundamentalism - also known as neoliberalism - had almost all governments by the throat. Any politicians who tried to protect the weak from the powerful or the natural world from industrial destruction were punished by the corporate media or the markets.

This extreme political doctrine - that governments must cease to govern - has made direct, uncomplicated action almost unthinkable. Just as the extent of humankind's greatest crisis - climate breakdown - became clear, governments willing to address it were everywhere being disciplined or purged.

Since then, this doctrine has caused financial crises and economic collapse, the destruction of livelihoods, mountainous debt, insecurity and the devastation of the living planet. It has, as Thomas Piketty demonstrates, replaced enterprise with patrimonial capitalism: neoliberal economies rapidly become dominated by rent and inherited wealth, in which social mobility stalls.

But despite these evident failures, despite the fact that the claims of market fundamentalism have been disproven as dramatically as those of state communism, somehow this zombie ideology staggers on. Were the ozone hole to have been discovered today, governments would have announced talks about talks about talks, and we would still be discussing whether something should be done as our skin turned to crackling.

This blog first appeared on the Guardian