Academic research often cites flexible energy technologies such as battery storage and electric vehicles (EVs) as key components of the low-carbon economies of the future. But with policies supporting the UK Government's 2050 net-zero goal still in their infancy, what must now be done to support their widespread adoption?

edie recently convened a group of energy leaders from an array of industry sectors – all members of our Energy Leaders Club – to discuss exactly that.

Hosted in association with SmartestEnergy and chaired by Energy UK’s head of public affairs and engagement Simon Markall, edie’s roundtable on smart, flexible energy systems explored where businesses are currently at in the transition to a decentralised, decarbonised energy system – and how progress could be accelerated through the support of regulators, innovators, institutions and infrastructure.

The event, held in London, marked the two-year anniversary of the Government’s Smart Systems and Flexibility Plan. While it is undeniable that the Plan has driven progress across a number of key areas relating to smart technologies and energy storage, roundtable participants were vocal in their criticisms of its limitations. In fact, the crux of the discussion centred around what must now be done not only to achieve the aims of the Plan itself, but the Government’s wider net-zero commitment for 2050.

Here, edie highlights the key green policy gaps highlighted during the discussion – and the participants’ thoughts about rectifying them.

A decade ago, solar power accounted for a minute proportion of the UK’s energy mix, but now covers around 20% of demand on sunny days. Participants pointed out that this growth – comparable to current happenings in offshore wind – was supported by a range of subsidies, plus the feed-in-tariffs (FITs) scheme and the Renewables Obligation.

SmartestEnergy’s strategic sales manager Michael Watts (pictured below) works tirelessly to provide businesses with the advice and technologies needed to decarbonise their energy and lower costs but was the first to admit that Government incentives surrounding battery storage are “completely wrong at the moment” and have created a landscape in which businesses are “poised but not leaping”. 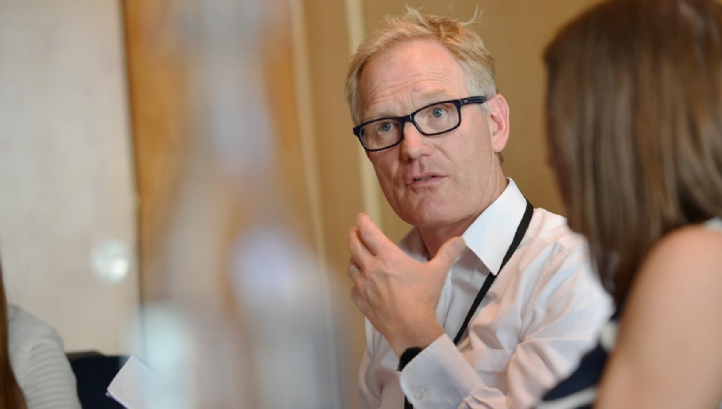 He pointed out that, despite multi-million-pound funds being opened by the Government for one-off investments, long-term subsidies, grants and loans are lacking – as are measures to prevent battery users incurring charges both for importing and exporting energy.

“There are a lot of breaks being put on flexibility for businesses from the policy side… I fear some progress is being lost in the Brexit jam,” Watts said.

“Big industrials who can schedule their output and load against energy prices are all doing so and have been for the best part of 20 years, but there hasn’t been a tremendous uptake among commercial users. This is typically because commercial users are unable to curtail their demand to the extent which provides the required reduction to meet grid needs. However, the introduction of flex aggregators can help the demand side provide a collective response."

Several of the participants concurred with Watts. Virgin Atlantic’s senior executive for portfolio strategy and assurance Lee Hill dubbed a poor incentive landscape “one of the key hurdles” to investing in flexible energy solutions, while UPS’s sustainable development coordinator Claire Thompson-Sage arguing the case for long-termism in regard to incentives. Specifically, she cited the Department for Transport’s (DfT) recent move to limit incentives for plug-in-hybrid EVs at short-notice as the antithesis of best practice.

“If you’re building the business case for a 10-year project and the incentive is only going to last for five, then it may not stack up,” Thompson-Sage explained. “It’s always worth asking what we get from incentives beyond immediate support.”

It was then asked if businesses struggling to build a business case in the absence of clear incentives should choose a model in which they could either jointly own and manage assets such as batteries and vehicle-to-grid (V2G) chargers – or trade energy with each other. Indeed, shared ownership has worked as the foundation of community renewables, while emerging models such as blockchain are making peer-to-peer energy trading simpler.

What’s stopping these models from being taken up at scale, UPS’s Thompson-Sage (pictured below) argued, is a lack of regulation to help businesses access expert advice and determine where responsibility should lie.

“If a facility is a risk if it’s not well-managed, you need expertise and a guarantee of management before businesses buy-in to sharing that resource,” she said. 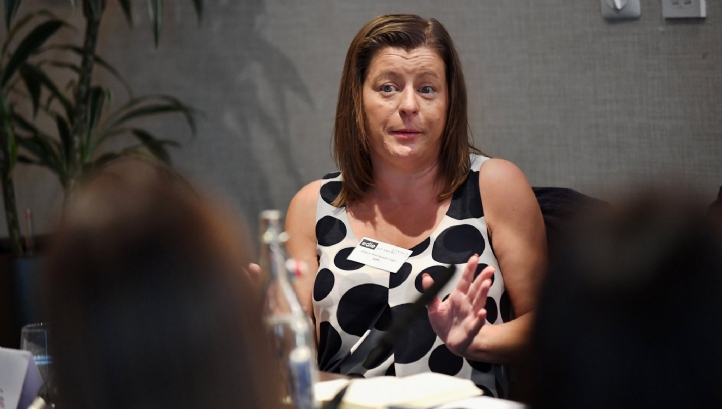 An energy manager from a major retailer agreed, citing an occasion in which one of the brand’s stores was affected after flexible energy system providing an entire retail park failed.

In order to overcome these fears, DHL’s quality & environment manager Jonathan Randles suggested, sharing models could first be trialled among domestic users, with the support of Government. He noted the success of peer-to-peer energy trading in Hackney and Cornwall as a precursor to business uptake.

Virgin Atlantic’s Hill concurred, adding: “It seems that the proposition of certain technologies have got much more legs now, because businesses are starting to support the opportunity to work collectively in their local areas with their peers."

Technology: A ‘tortoise and hare’ situation

As the debate turned specifically to battery technology, participants pointed out that analysts are predicting that the battery market will double in size several times over through to 2030 as technological capabilities accelerate rapidly – a situation which may lead to battery technologies “cannibalising” themselves.

“If you’re looking at a 10-year investment, imagine how much mobile phones have changed in that time,” John Lewis Partnership’s operations manager for energy and innovation Neil Coleman said. “You don’t want to be in the position where you’re not really sure if your battery will last 10 years and you know that, if it does, it will be outdated.”

And it’s not just battery technology which is altering rapidly, Coleman noted – the battery industry’s relative infancy means that firms within it are regularly expanding, shrinking, changing name or being acquired.

On the other hand, other participants explained, lithium units with enough capacity to serve retail units or offices are still too bulky to fit inside them – and are broadly incapable of storing energy for extended periods. This challenge, combined with mounting concerns around the environmental impacts of minerals used to make batteries, it was agreed, has set the stage for synthetic alternatives to be developed at a pace – but only with the right policy support for innovators, which doesn’t yet seem to be in place.

So it was concluded that technologies have improved at breakneck speed in some regards – and at a snail’s pace in others. But the publication of case studies and data laying out exactly how to make flexible energy assets a worthy investment for business, participants concluded, has been nothing but “painstakingly” slow.

Some argued that the issue was a lack of data creation; others cited data interpretation and disclosure to external organisations. In either case, Unite Students' group energy & environment manager James Tiernan said, a lack of real-life success stories is a “big source of cynicism and scepticism” around energy storage.

“Battery and solar always seems to be just over the horizon; every year, we go to presentations where the speakers say ‘this is the year for the tipping point’ – and then, we don’t hear that it has come,” Tiernan said.

John Lewis Partnership’s Coleman agreed, adding that better data policy could enable businesses to take a predictive approach rather than a reactive one, thus lowering costs and risks. He added that “some of the low-hanging fruit” in reaching net-zero for businesses could still be going unnoticed in the absence of data.

During the roundtable, the sentiment was that underpinning all of the policy gaps detailed so far is one key factor – a disconnect between Governmental departments, which participants agreed could be rectified by updating all key, sector-specific frameworks with net-zero in mind.

Hilton’s senior energy manager Simon Wynne explained that policies with different deadlines and priorities, some set before the original 2008 Climate Change Act, some after, and some in line with the new 2050 goals, currently “add up to an uncertain picture”.

Specifically, Wynn voiced concerns over ministers raking “much more of a short-term view” in sectors such as transport and the built environment. His peers agreed that while short-termism has its merits in moving sustainability up the agenda and accelerating progress, it does not guarantee continued improvements.

Crucially, this discussion reminded all present that the interests of different stakeholders – be they investors demanding more disclosure, businesses willing to change their models or members of the public partaking in climate activism – are broadly aligned towards a low-carbon, resource-efficient, socially equal future. In other words, their key collective call to Government was to not be afraid of increasing its clean, flexible energy ambitions. 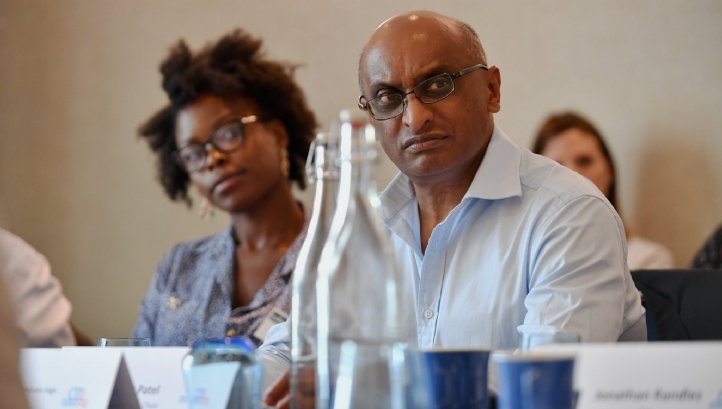 “There’s more scrutiny in terms of the sustainable business case from the pubic and the board – but that helps and supports us; it drives momentum and ambition,” DHL Supply Chain’s environment manager Kirit Patel (pictured above) explained.

“Flexibility is going to be absolutely essential if we are to get anywhere near the 2050 target and so, the Government will be talking about the role we have as individuals and as businesses in delivering that,” Markall, chairing the discussion, reassured participants.