Sulphide monitoring gets a makeover

Shared services are on the agenda for Scottish local authorities. Jackie McGuire looks at the collaborative progress being made in the drive for efficiency savings.

The first installation of a new MIPP system for pipe lining has taken place in Dorset. On behalf of Aqualiner, Ian Clarke reports

· Is it time to tune into a higher frequency?


· Give Peacehaven a chance


· The right solutions for bonding the bunds


· A specification for successful asset management


· FOG - are you disposing of yours legally?

Improved efficiency and performance are two of the benefits at Thames Water's Hogsmill Sewage Treatment Works in Surbiton, following a series of upgrading projects carried out by the chemical dosing specialist Gee & Company.

The Welsh Assembly has published a list of wood burning stoves and other domestic fireplaces that are exempt from legal restrictions on the burning of solid fuels in the home in an attempt to improve air quality.

Designs on the future

The intense rainfall of recent years has highlighted the problems of surface water management in the UK. Which is why it is so vital that the Floods and Water Management Bill going through Parliament provides the solutions, says Dr Ian Pallett.


· It pays to make the right choice


· Just the ticket for your weighbridge needs

Environmental recruitment consultant Jeremy Money is well placed to judge the state of the job market and here he tells edie how the runaway success of the sector means there are more jobs than applicants.

The Environmental Industries Commission keeps a close eye on developments within the sector. Here director Merlin Hyman and two of the organisations group heads assess the prospects for those working in the waste management and contaminated land arenas.

A new coalition has been formed to drive forward the concept that environmental standards determine long-term economic success. Adrian Wilkes reports on the Aldersgate Group


· Greece in breach of ozone laws

A reeding lesson from BAA

BAA's construction of a wetland treatment system, designed to deal with contaminated airfield runoff, has been praised for its environmental sustainability and innovation

New initiatives and proposed strategies to target vehicle emissions, combined with a long-term fall in atmospheric pollutants, give cause optimism over air quality but too many local authorities need to improve their performance as regulators


· The search for certification: www.emsaudit.com 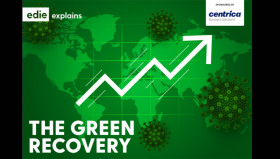