National Highways has set out plans to use low-carbon construction methods and carbon offsetting during the Lower Thames Crossing project, but green groups have argued it is neglecting to address the extra emissions the road will generate in use. 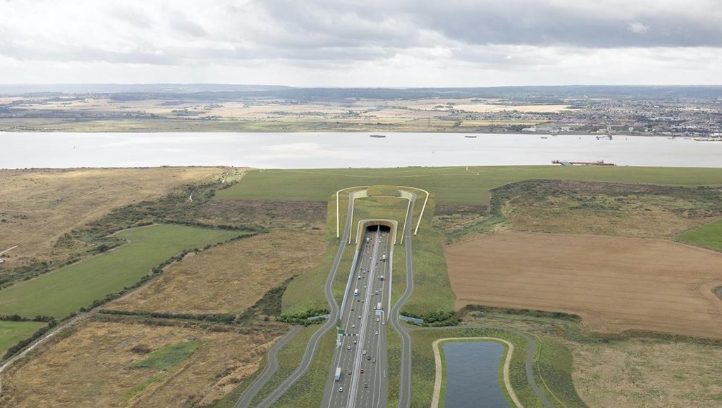 The £8bn+ project is predicted to increase emissions from road transport by 3.2 million tonnes of CO2e over a 62-year period

The Lower Thames Crossing is a £8bn+ project intended to double road capacity across the Thames east of London, running between Essex and Kent. The proposal has long been criticized by green groups and local residents on the grounds of noise and air pollution and increased emissions.

To help allay these concerns, National Highways has announced an intention to use the project as a “pathfinder” – a demonstration to prove how carbon-neutral methods of construction could be implemented on future projects.

It has promised that the construction-related emissions will be at least one-third lower than originally forecast as a result of changes such as redesigning structures to minimize material use and waste; swapping diesel generators with zero-carbon energy and procuring from local suppliers who are working towards carbon reduction targets. National Highways is also looking at innovative low-carbon steel and concrete, as well as alternatives to these materials.

National Highways has also stated that it will “consider” using carbon offsetting to address residual emissions from construction. Overall, it has promised the “greenest road ever built in the UK”.

This is, notably, the first time that these commitments have been made for a major UK infrastructure project. Nonetheless, critics of the project are asking for more detailed information on how National Highways is addressing construction-related emissions – and questioning how the predicted increase in road transport emissions could possible be badged as “green”.

The Thames Crossing Action Group stated that the use of the word ‘pathfinder’ is evidence that National Highways is “utilising terminology that no one actually is aware of or understands to try to give the impression they have a plan”.

A statement from the Group reads: “From what we can see in the info provided there is a lot of talk, but not much actual evidence to back up the talk. Identifying, testing and considering ideas doesn’t give us much confidence that if the proposed Lower Thames Crossing did go ahead it would solve the problem of more than five million million tonnes of carbon emissions.

“The proposed Lower Thames Crossing, if it goes ahead, would negatively impact the lives, homes, businesses, health and wellbeing of people, destroying communities, greenbelt, woodland including irreplaceable ancient woodland, agricultural land including valuable Grade-1-listed land, solar farms, wildlife and habitat, the environment and so much more.

“There is no evidence in the info shared by National Highways that changes our mind, we are and remain strongly opposed to the proposed Lower Thames Crossing.”

The Lower Thames Crossing forms part of the UK Government’s second Road Investment Strategy (RIS2), which was first announced at the 2020 Budget and plans were then formalised with Highways England in August 2020. RIS2 sets aside a total of £27.4bn of public funding for more than 50 schemes.

In light of the legally binding net-zero target for 2050, and the supporting Transport Decarbonisation Plan, environmental groups have continually shown vocal opposition to RIS2 and to several of its key projects.