Building materials giant Hanson UK has installed a renewable hydrogen generation unit at one of its facilities near Swansea, Wales, to test the potential of replacing natural gas with lower-carbon alternatives. 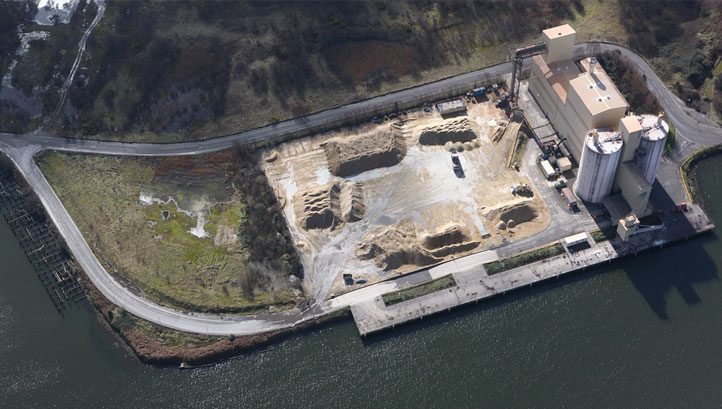 Pictured: An aerial view of the plant in Port Talbot

The unit has been installed at the firm’s Regen ground granulated blast-furnace slag (GGBS) plant in Port Talbot. It contains an electrolyser which, powered by renewable electricity generated by onsite solar and wind arrays, splits water into hydrogen and oxygen. The separated hydrogen is then funnelled into the burner used to generate heat for the plant’s processes, mitigating the need for some of the natural gas.

Hanson UK claims that the carbon footprint of the Regen GBBS produced at the plant could be brought down to one-tenth of that of Portland cement, if the electricity and gas used during production processes are steeply decarbonised.

Of course, hydrogen is not a silver bullet solution. More than 95% of the hydrogen produced globally uses fossil fuels, hence Hanson UK’s decision to trial a renewably powered unit. Moreover, there are concerns about the cost of green hydrogen and about its safety implications in comparison to natural gas.

To the former concern, Hanson UK secured support from the Reducing Industrial Carbon Emissions (RICE) initiative to fund the unit. The scheme is backed by the EU through its European Regional Development Fund (ERDF). To this latter point, experts from Swansea University’s Energy Safety Research Institute are assisting Hanson UK.

“As a leading manufacturer, we take our responsibility very seriously,” Hanson UK’s head of sustainability Marian Garfield said. “In the UK we have already achieved a 30% reduction in CO2 emissions since 1990 across the business and have set an ambitious new target of a 50%reduction by 2030 from the same baseline. We are constantly looking to improve energy efficiency and carbon reduction at our cement and Regen plants, so we are delighted to be involved with this innovative research project.”

Cement is notably the source of around 1.5% of the UK’s annual carbon emissions. The sector is regarded as hard-to-abate, given its reliance on heavy industrial processes that take much heat and electricity. It is also growing rapidly, with some forecasts predicting a 25% increase in demand through to 2030, as the UK Government bets on construction and related industries to stimulate the economy post-Covid-19 and deliver its net-zero and climate adaptation goals.

Hanson UK is a subsidiary of HeidelbergCement. Globally, this firm is targeting net-zero by 2050, along with dozens of its competitors and industry peers. In the UK specifically, it is a member of UK Concrete, which last year outlined plans for the sector to reach ‘net-negative’ emissions by – or before – 2050.

The announcement from Hanson UK comes shortly after the Welsh Government published a response to the Climate Change Committee’s (CCC) latest advice on the net-zero transition.

The CCC has repeatedly stated that Wales is likely to undergo a slower net-zero transition than the rest of the UK, and its latest advice paper provides specific recommendations for delivering an accelerated decarbonisation rate while also driving progress towards Wales’ ‘Well-being Goals’, as detailed in the Wellbeing of Future Generations Act 2015. Goals cover issues such as community cohesion, preserving cultural heritage and helping local industries thrive.

Responding to the CCC’s paper, the Welsh Government has said that it is officially targeting net-zero by 2050, as a legally binding deadline, but will “aim to get there sooner”. Focus areas will be decarbonising heavy industry and delivering the changes in infrastructure and policy needed to catalyse behaviour change at scale, including the shift to low-carbon transport and low-carbon domestic heating.

“We were the first country in the world to declare a climate emergency, but now we will use the new science to make our long-held ambition of a net-zero Wales, a reality,” Welsh Environment, Energy and Rural Affairs Lesley Griffiths said. Specific science referenced includes the CCC’s advice on the UK’s Sixth Carbon Budget.

“While we have set our intention to achieve this by 2050 in law, we will continue to do all we can to get there sooner. The global climate outlook is grave, and we will not shy away from stopping harmful emissions being pumped into our atmosphere and heating our planet. Business as usual is not an option.

“As with Covid, climate change will impact us all, but the stark reality remains our most vulnerable communities will be hit the hardest. The transition towards a net-zero Wales must be fair and just, a green and clean future which means good quality jobs and leaves no communities behind.”