Mark Carney: Climate considerations must be ’embedded’ in every financial decision for a truly green recovery

Former Bank of England Governor Mark Carney has outlined his vision for financing a green economic recovery for Covid-19 in the UK, calling for measures to ensure that every financial decision made by the private sector takes climate into account. 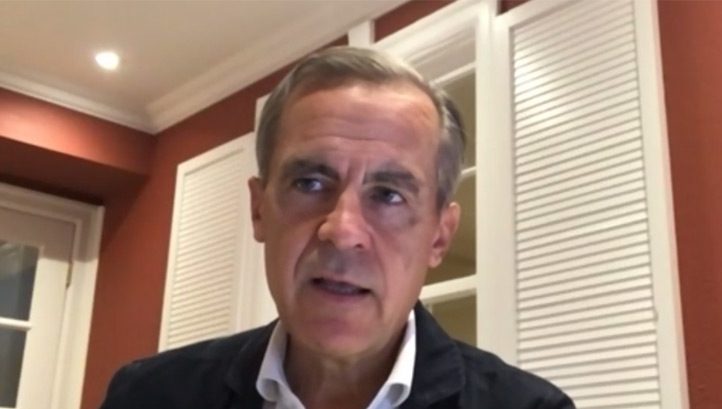 Speaking at the re-launch of the All-Party Parliamentary Group (APPG) for the Environment on Tuesday (15 September), Carney compared the economic shockwaves brought about by the pandemic to the climate-related risks which businesses will face in the coming decades – be they physical, transition-related or reputational.

“You can’t wish away systemic risk – it’s going to crystallise at some point,” he said. “For virtually every company and country, this requires a new strategy…. forced by the dynamics of the crisis.”

Ultimately, he explained, any successful strategy will result in climate-related risks and opportunities becoming “core determinants” of perceived asset and project value. Such strategies would “embed” climate considerations at the forefront of decision-making processes.

“We’re not waiting for COP26, we’re trying to layer this into the financial sector immediately,” Carney said.

“In an ideal situation… professionals have the information they need to consider the impact of a company or asset on the transition to net-zero and this becomes a natural way of judging its value.”

Carney’s disclosure of this vision comes as the Treasury and Bank of England face continued criticism for providing billion-pound bail-outs to high-emitting companies and sectors without environmental conditions.

As finance advisor for COP26, Carney said, he believes that the transition of financial approach he envisions is a “key objective” for the UK Government as Conference host, and that businesses wishing to get ahead of the curve on legislation will be “moving with the flow”.

However, Carney believes that the objective is both “simple and hard” – simple to understand and easy to back for nations and corporates with net-zero targets, yet complex to deliver.

He identified three key transformations which need to happen to transform financial systems and bring about a truly green recovery: Better disclosure, proven returns on green investments and a reframing of ESG.

On the former, Carney sees more nations mandating companies to report in line with the recommendations of the Task-Force on Climate-Related Disclosures (TCFD) – a framework which, crucially, requires these organisations to forsee the impacts of various scenarios of warming on their future viability. The UK Government has said it will mandate TCFD-aligned disclosures for certain large organisations within three years, under its Green Finance Strategy.  Larger pension schemes will be among the first cohort of organisations affected by these changes.

Carney argued that voluntary disclosure frameworks have left “loopholes” enabling corporates to continue de-prioritising or externalising their climate risk – most commonly failing to account for Scope 3 (indirect) emissions. He also spoke in favour of new risk-assessment timelines for major financial institutions, arguing that short-termism has led to the backing of high-carbon assets for short-term financial gain.

On the returns piece, Carney urged changes which would make it easier for investors – from large, institutional bodies, down to individuals with small portfolios – to see exactly what their money was financing and how each of these projects perform. Such information, coupled with “credible, predictable policy pathways” for scaling up low-carbon industries, would make it far easier to build the business case, he argued. A recent YouGov survey of more than 4,400 British adults with pensions found that around three-quarters do not know how their pots are invested.

As for ESG, Carney believes that the S (social) and the G (governance) have been “over-emphasised” in mainstream approaches. Recent analysis from Moody’s has shown that the pandemic may have tipped the scales even further towards social sustainability-related investing compared to low-carbon activities, with businesses keen to invest in public health and community-related schemes.

This must be changed if the “immature, fragmented and small” markets for nature-based climate solutions and carbon offsetting are to be “professionalised” and to tackle problems with “variable quality”, Carney said. He is notably spearheading a new private-sector taskforce aiming to scale up voluntary carbon credit markets and enable “tens of billions of dollars of flow” annually. Representatives from Unilever, Nestle, BP and Shell are among the taskforce’s members.

With many major economies having fully costed their initial recovery packages (£160bn for the UK and €750bn for the EU, for example) but now preparing for the possibility of a second wave, Carney said most nations must still make “finer judgements” about how to allocate funding and change policies in the coming months.

The world is now at a stage in the pandemic where it “makes sense to differentiate” between Covid-19-related and routine capital expenditure, he argued, and to kick-start measures to better measure human, social and natural capital costs and benefits.

Carney said he is witnessing a “lot of momentum and engagement” from the private sector on the green recovery movement, but that many corporates and financial bodies are waiting for “credible, predictable pathways” to give “a sense of where the industrial structure is going” for energy and transport. He believes further supports and clarity are particularly needed for electric vehicles (EVs), other forms of low-carbon transport including hydrogen trains and trucks, and renewable energy generation beyond electricity.

On the topic of bail-outs, Carney said it does not make sense to “generically” provide ongoing support for all sectors. Governments should, instead, confidentially ask certain high-carbon businesses and sectors whether they forsee “winding down” in the coming years, as coal generation will be mandated to in nations like the UK and Spain. UN Secretary-General Antonio Guterres has said that coal has “no place” in pandemic recovery strategies, but G20 nations have still provided more than $178bn in unconditional bailouts to fossil fuel companies, including coal firms, since April 1, according to the Energy Policy Tracker.

On Wednesday 23 September, edie is hosting a series of free green recovery-themed webinars and masterclasses featuring sustainable business experts from organisations including the Aldersgate Group, BT, Bank of England, Ella’s Kitchen and UKGBC.

The Green Recovery Inspiration Sessions offer up an afternoon of live, interactive webinar presentations and discussions – all dedicated to delivering a socially and environmentally sustainable recovery from the coronavirus pandemic. Read the full agenda and register for free here.