Consumer goods giants Mars Petcare and Heinz have simultaneously announced that they are removing hundreds of tonnes of plastic shrink wrap from multipacks of their products. 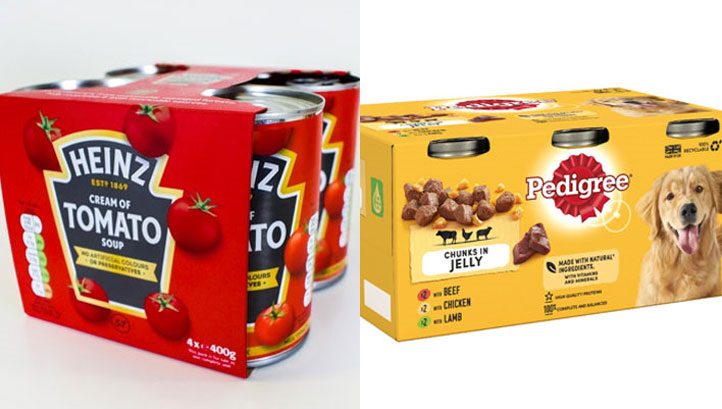 Plastic shrinkwrap is classed as hard-to-recycle

Mars Petcare has said it will replace shrink film with cardboard across all mixed multipack cans of Pedigree, Whiskas, Chappie and Kitekat pet food in the UK.

The move, it said, will eliminate 180 tonnes of plastic from the environment every year.

The new packaging will be widely available in stores from 11 September.

Meanwhile, Heinz has confirmed plans to roll out its Heinz Eco-Friendly Sleeve Multipack across all its multipack canned products nationwide. The brand announced the roll-out in January this year.

Following a successful trial on its D2C website Heinz to Home, the Heinz Eco-Friendly Sleeve will be available across the whole Heinz multipack canned range in all major UK retailers from this month.

The new wrap design uses no glue. It also uses 50% less material than a fully enclosed wraparound box and 10% less than a traditional paperboard sleeve design. Heinz estimates that this will remove 550 tonnes of shrink-wrap packaging from its shelves.

Both moves are the latest commitments to circularity from both companies.

In July this year, Mars Petcare announced a recycling programme with Pets at Home, in which dedicated in-store recycling points for pet food packaging were introduced across 40 UK stores.

Additional changes this year include a 12% reduction in Pedigree Schmackos packaging. Also, Dreamies 60g packs became thinner, which lead to a combined 27.6 tonnes of virgin plastic saved in the UK.

Further to this, Mars Petcare joined Asda in its trial of in-store refill zones and provided the first pet care offering with products from Mars brands – Whiskas and Pedigree.

Heinz said in early 2020 that it was removing plastic shrink-wrap from multipacks of Heinz Soup, Beanz and Pasta across Tesco stores nationwide.