Messages of hope: How world leaders are rallying for a green Covid-19 recovery

The two-day Petersberg Climate Dialogue finished yesterday evening, with ministerial leaders from the UK, Germany, the EU and the UN all delivering rallying cries for nations to focus on climate mitigation as part of any efforts to stimulate the economic downturned caused by the coronavirus outbreak. 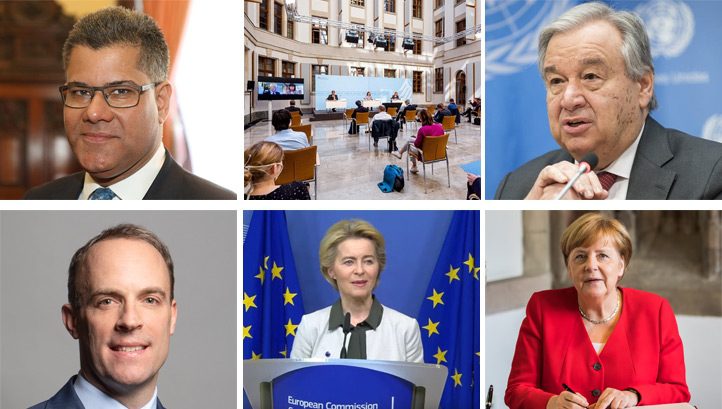 Amidst the global pandemic of the coronavirus, a virtual meeting attended by just 35 environmental ministers sought to make enough noise to ensure that long-term policy plans were firmly aligned with the 1.5C pathway of the Paris Agreement.

The 11th Petersberg Climate Dialogue took place between April 27-28 and was held virtually due to the restrictions caused by the coronavirus outbreak.

Organised by Germany and co-hosted by the UK – as incoming COP26 presidency – the two-day event saw a host of high-level politicians reiterate calls for a “green” economic recovery to be prioritised as nations battle against the economic downturn that the pandemic has caused. Here, edie rounds up the key messages.

Guterres issued a video message to remind nations of the long-term threat of climate change and the need for higher ambitions in national and global efforts to limit the global temperature increase to 1.5C.

Alongside calling for the EU to outline raised ambitions for its climate targets up to 2030, Guterres called for developed nations to deliver a promise to funnel $100bn annually into developing nations to help them combat climate change.

“We cannot allow the heavy and rising debt burden of developing countries to serve as a barrier to their ambition,” Guterres said.

Specifically, the UN Secretary-General called for taxpayer money to “flow” into sustainable sectors and projects that help stimulate the economy while decarbonising nations, alluding to reports that nations are propping up the fossil fuel industries without ties to environmental performance.

“Public funds should invest in the future by flowing to sustainable sectors and projects that help the environment and climate. Fossil fuel subsidies must end, and carbon must have a price so polluters will pay for their pollution,” Guterres said.

“Where taxpayers’ money is used to rescue businesses, it must be creating green jobs and sustainable and inclusive growth…It must not be bailing out outdated, polluting, carbon-intensive industries.”

Sharma used the summit to reveal that net-zero energy and net-zero transport would be two of the “key campaigns” the UK would focus on in the build-up to COP26, which still doesn’t have a set date after being delayed until 2021.

During his closing speech at the event, Sharma again doubled-down on the need for accelerated climate action, and promised to work with Italy – which is hosting the pre-COP events – to ensure nations are committed to heightened, but also fair and just, climate action.

“The lead up to COP26 can be those footsteps when the world comes together to ramp up momentum towards a climate-resilient, zero-carbon economy. I can tell you that as incoming COP Presidency, our promise from the UK together with Italy, is that our teams will work night and day to raise the ambition on climate change.

“This does mean more ambition to reduce emissions, more ambition to build resilience, and more ambition to cooperate with each other, as we have done and shown today. And, of course, as we recover this transition must be fair and inclusive, which many of you have made the point on, and we must make sure that no-one is left behind.

“I do believe we owe that to ourselves and of course to future generations.”

Raab delivered a video speech to the conference on behalf of Prime Minister Boris Johnson, who this morning announced the birth of his son.

Raab called for economies to be “revived” in a way that will “stand the test of time” by withstanding and combatting climate change. He claimed there was no choice between cutting emissions or growing the economy, and that they must be done in unison.

While the world is rightly focused on #COVID19, challenges of climate change have not gone away.

Here’s my message to world leaders at the Petersberg Dialogue on behalf of @10DowningStreet & @COP26 on the need for ambitious plans to tackle climate change pic.twitter.com/xXNcitvnhI

However, Raab was unable to confirm how UK bailouts and rescue packages would be issued. Already, green groups have raised concerns that bailouts to airlines and automakers aren’t yet being linked to the need to reduce emissions as part of the UK’s target to reach net-zero emissions by 2050.

As co-host of the Petersberg Climate Dialogue, Germany’s chancellor Angela Merkel gave an impassioned speech to unveil her support for the EU’s Green New Deal.

Chancellor Merkel reaffirmed her support for raising the EU’s emissions reduction target for 2030 from 40% to 50% but also expressed interested in raising the ambition to 55%. The chancellor also called for the extension of the EU’s emissions trading system (EU ETS) to new sectors. Germany intends to do this for the heating and transport sectors, according to Euractiv.

“I welcome the planned expansion of the EU emissions trade [EU ETS] to additional sectors,” she said. “It is the best way to prevent distortion of competition”.

However, Germany has come under fire for its approach to rescue packages thus far. Consulting firms Vivid Economics and Financing for Biodiversity (F4B) issued a study into national approaches to coronavirus rescue packages, naming Germany as the nation with the most environmentally damaging approach.

While the US and China’s bailouts are the most focused on fossil fuels globally, Germany’s heavy industry benefits from liquidity support and are obviously carbon-intensive.

In December, European Commission President Ursula von der Leyen unveiled 50 sweeping plans to enable the EU to reach net-zero emissions by 2050, claiming that the Green Deal was “more than just a vision, it is a roadmap for action”.

Speaking via video at the Summit, she stated that the deal would act as a “compass” from which nations could rebuild economies while still pushing along the low-carbon transition.

As we start to rebuild our economies after the coronavirus, we need to invest in smartly. Our compass will remain the #EUGreenDeal, which can transform our economies and societies to confront climate change. For the future of our planet and our children. #GreenRecovery🌍 pic.twitter.com/nNmPaGqxfU

The EU has already claimed that green finance will be ‘key focus’ of its post-coronavirus recovery phase and a transition fund worth €100bn has been set up alongside a series of new sector policies to ensure all industries are able to decarbonise without causing socio-economic disruptions.