Microsoft and Chevron partner on bioenergy and carbon capture project

Oil and gas major Chevron is collaborating with Schlumberger's New Energy arm and Microsoft to develop a major bioenergy plant with carbon capture and storage (BECCS) in California. 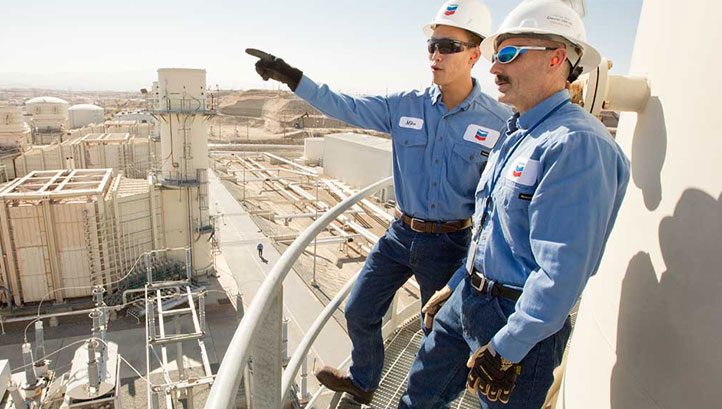 Pictured: Facilities engineers at one of Chevron's existing US gas projects

In a statement published late last week, Chevron stated that the companies will begin front-end engineering and design processes immediately, with the hopes of securing a final investment decision in 2022. If the project runs to plan, the plant could come online in Mendota this decade, capturing some 300,000 tonnes of CO2e every year.

Chevron and Schlumberger’s plans involve converting 200,000 tonnes of biomass made from locally sourced agricultural waste, like almond trees, into renewable synthetic gas every year. The gas can then be mixed with oxygen in a combustor to generate electricity.

While biomass is lower-emission than fossil fuels, it still has a climate impact. But Chevron and Schlumberger New Energy believe that more than 99% of the CO2 emissions from the process can be captured and “permanently” sequestered underground in natural geologic formations.

Microsoft is notably targeting negative emissions by 2030 and the removal of all historic corporate emissions by 2050 and has turned to CCS to deliver some of this progress. However, the new project’s impact will not be included in accounting for this goal. Instead, the tech giant is providing its cloud technologies and AI technologies to the project to help maximise efficiency. Microsoft has faced repeated criticisms of its decision to continue providing services to high-emitting energy majors.

“Innovation at this scale is accelerated by our strong relationship, as we work together to help provide a sustainable and clean environment for local communities.”

Chevron and Schlumberger said in a statement that California has been chosen for the location as it is a geography where “existing policies and regulations can make projects attractive today”. California is notably targeting a 56% reduction in emissions from its energy sector by 2030 against a 1990 baseline. Moreover, the state will ban almost all burning of agricultural waste by 2025, so the project partners claim they are helping agribusinesses navigate this new requirement.

A boon for BECCS?

The news from California comes shortly after UK-based Drax began the two-year planning process to scale up BECCS at its power plant in North Yorkshire.

Drax first began capturing carbon from the bioenergy production process in early 2019, after working with C-Capture to pilot carbon capture technology. It then formed partnerships with firms including Mitsubishi Heavy Industries to scale-up capture capacity and to supply captured carbon to industries including beverages and materials.

If the Development Consent Order for the latest planned expansion is granted, Drax believes it will be able to capture eight million tonnes of CO2e every year using the new infrastructure.