Retailer Morrisons has confirmed plans to trial six "zero waste" stores in Edinburgh, which could be replicated across all its stores nationwide if successful. 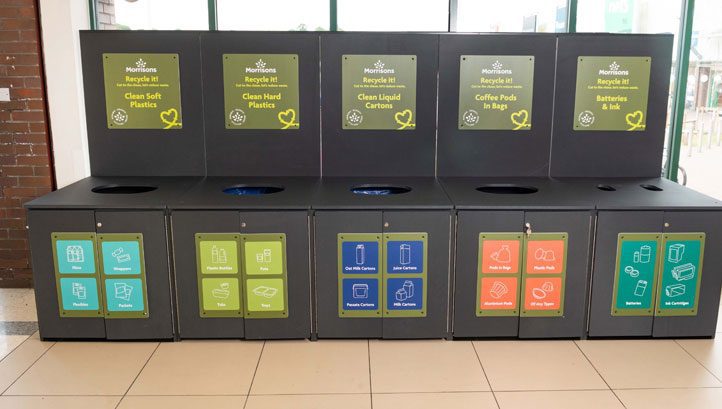 Morrisons’ new stores will all have the ability to operate with zero waste produced by 2025 at the latest. Zero waste will cover both the store itself and from customers.

The stores have been introduced through a partnership with Nestlé that will see all hard-to-recycle soft plastics collected in the stores and recycled in the UK, rather than shipped abroad – an issue that has led to increased pollution of the natural environment in some countries.

Shop waste such as soft and hard plastics, cardboard, food waste, green waste, PPE, plus tins, cans and foils will be sorted by warehouse workers and collected by recycling specialists, while customer waste can be collected at instore points. These items include hard-to-recycle soft plastics like confectionery wrappers and pet food pouches, hard plastics such as yoghurt tubs, mixed materials like crisp tubes and coffee pods.

Morrisons’ sustainability procurement director Jamie Winter said: “We’re not going to reach our ambitious targets through incremental improvements alone. Sometimes you need to take giant steps and we believe that waste is one of those areas. We believe that we can, at a stroke, enable these trial stores to move from recycling around 27% of their general waste to over 84% and with a clear line of sight to 100%.

“We all need to see waste as a resource to be repurposed and reused. The technology, creativity and will exists – it’s a question of harnessing the right process for the right type of waste and executing it well. And all waste collected in our stores will be recycled here in the UK – we will not reprocess anything abroad. If we’re successful, we’ll roll this zero waste store concept out across the UK as fast as we can.”

If successful, the store format will be rolled out nationwide across all Morrisons 498 over the next year. It forms part of a long-term pledge from Morrisons to recycle all of the waste it creates across all its stores by 2025.

The company has reduced its own-brand plastic packaging by more than 8,000 tonnes since 2017 and is also aiming to reduce operational food waste in-store by 50% by 2030.

Earlier this year, Morrisons confirmed it would remove all plastic versions of its “bags for life” from stores nationwide, in favour of paper and other reusable options, in a move that will save 3,200 tonnes of plastic each year.

The retailer claims that removing every plastic bag from stores nationwide will save 3,200 tonnes of plastic each year. A life cycle assessment carried out by The University of Sheffield found that paper bag replacements offer a lower carbon footprint than the plastics versions.

The announcement builds on Morrisons’ decision to remove single-use plastic bags back in 2017 and is based on positive feedback from consumer-facing trials last year. Since 2017, the company has removed and made recyclable more than 1,000 tonnes of plastic, putting it on course to reach a target to reduce plastics usage by 50% by 2025. It falls under its overarching commitment to ensure that 100% of the plastics packaging on its own-brand projects is recyclable.

Customers ordering from Morrisons online will also receive their deliveries without plastic bags.

Additionally, Morrisons has revealed an ambition to become the first UK supermarket to use only farms certified as net-zero when sourcing products and ingredients from British suppliers.