National Grid's Electricity Transmission arm is expanding its use of power flow control technology, which has already unlocked 1.5GW of electricity grid capacity. 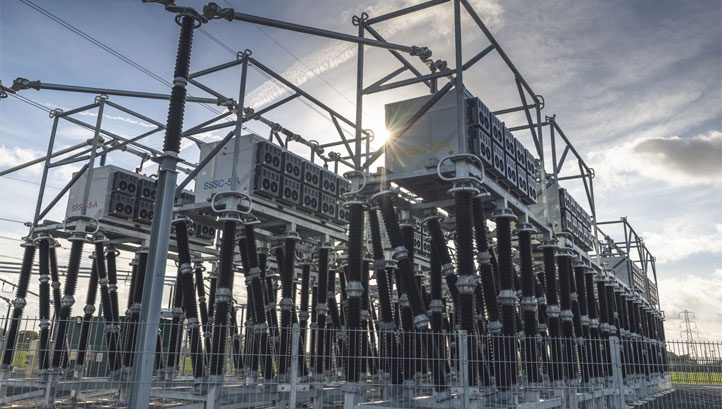 Pictured: The technology in use at Penwortham

The hope is that the move will support the transition to a net-zero power system, as it will help overcome the challenges posed by connecting more renewable generation to the network.

A more renewable-heavy generation mix, National Grid Electricity Transmission (NGET) said in a statement, entails changes to power flows and will lead to circuits becoming unequally loaded, largely due to the intermittency of generation. As such, some circuits can reach maximum capacity while others are still below their limits.

The flow control technology is called SmartValve and routes power through the circuits which have available capacity. It was installed on five circuits in the North of England earlier this year, unlocking 1.5GW of network capacity, and NGET has announced this week plans to expand the initiative to unlock a further 500MW. 500MW, NGET estimates, could be enough to power around 300,000 homes.

Harker, near Carlisle, and Penwortham, in Lancashire, will be the first locations to benefit from the new SmartValve deployments. The deployments will entail a scaling up of existing projects and will be completed in early 2022. The technology is modular, so it can be scaled at existing projects. Installed devices are also portable and can be moved between sites.

This approach, NGET’s director of new infrastructure Zac Richardson said, will minimise the cost of infrastructure projects and the associated carbon.

Efficiently transferring greater volumes of renewable power to customers in this way, Richardson said, feeds into the organisation’s commitment to “make the most of our existing network, delivering a cleaner, fairer and more affordable energy system that serves everyone”.

The announcement comes shortly after the UK Government confirmed plans to end unabated fossil-fuelled electricity generation domestically by 2035. Further details of how this transition will be delivered will be included in the forthcoming Net Zero Strategy; the Department for Business, Energy and Industrial Strategy (BEIS) has stated that the plans will support a mix of technologies including wind, solar, nuclear, hydrogen and carbon capture and storage (CCS).

In related news, a coalition of more than 25 industry organisations is calling for the UK Government to scrap VAT on domestic renewable energy installations and related clean technologies, like small-scale batteries. At present, these technologies are subjected to a 20% VAT rate, compared to 5% for fossil fuels for home heating.

The call to action is being led by the Association for Renewable Electricity and Clean Technology (REA), which has spearheaded a letter to HM Treasury, the Department for Business, Energy and Industrial Strategy (BEIS) and the Department for Levelling Up, Housing and Communities.

The letter states: “It is our belief that one of the best ways to protect consumers from volatile energy prices is to give them the ability to install renewable energy and clean technology systems in their own homes.

“However, unless steps are taken to increase the affordability of a number of technologies, the aspiration to install domestic zero-carbon energy systems will remain out of reach for many.”

The letter argues that the Government now has an opportune moment to alter the VAT rate, as it was set by the European Union, and as the Government is facing increasing pressure to join up policy gaps on the road to net-zero.

Another key driver will be the gas price crisis, which has prompted calls for a rethink of the ways in which the UK imports energy and the domestic generation mix.