The Government has launched its long-awaited National Infrastructure Strategy, detailing how transport, industry, energy and the built environment will be transformed to reach net-zero, with Chancellor Rishi Sunak using his spending review to confirm a £12bn commitment to the net-zero transition in 2021-2022. 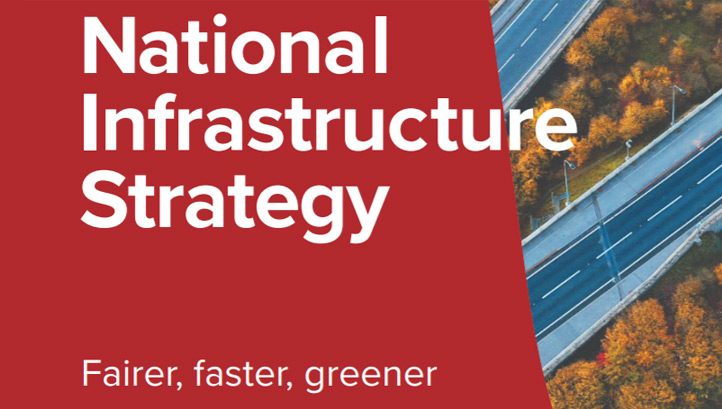 While the Spending Review was headlined by commitments to protect and create jobs post-Covid-19, Sunak confirmed the publication of the National Infrastructure Strategy (NIS), which details how £100bn will be spent on infrastructure in the 2021-2022 financial year – a real-terms, year-on-year increase of £27bn.

The 100-page report outlines the Government’s intention to “deliver an infrastructure revolution” that is tied to net-zero. However, the Government reiterated support for the controversial £27bn roads programme and the HS2 project – which it believes can assist with the net-zero transition despite opposition.

Based on expert advice from the National Infrastructure Commission (NIC), the NIS details “record levels of investment in strategic roads, rail, broadband and flood defences”, while reiterating the commitments of the Ten Point Plan. Read an in-depth look at the Ten Point Plan here.

“Our environmental agenda, set out in our recent ten-point plan, is fully reflected in this Strategy, with ambitious commitments on energy, decarbonisation and clean economic growth driving us towards net zero in 2050. Our new industrial revolution will create and support up to 250,000 green jobs,” Prime Minister Boris Johnson said in the report.

“Infrastructure will not, of course, level up Britain on its own. We must work on skills, on research and on innovation to create new, wealth-generating clusters – new Cambridges, new Thames Valleys – across the country. But this Strategy will put the calcium in our national bone structure and the collagen in our national skin tissue.”

To facilitate this demand, the Contracts for Difference (CfD) scheme has opened up for technologies such as floating offshore wind, solar and onshore wind. Ministers also want to boost the deployment of hydrogen and carbon capture and storage solutions to help meet the net-zero ambition. Private capital will additionally be funnelled into nuclear technologies to help overcome issues relating to intermittent generation from renewables.

The Government is targeting 12GW of wind and solar energy in the latest auction, more than double the previous round.

As recommended by the NIC, the Government “will ensure that total system costs are considered in designing future CfD rounds”. As part of the new batch of technologies, the NIS confirms that the Government will target 1GW of floating offshore renewables by 2030.

The strategy commits £160m to upgrade ports and manufacturing facilities to support 60,000 direct and indirect jobs in the wind sector by 2030.

The NIS notes that the Energy White Paper will “follow shortly” and will detail an overhaul to the current electricity network system and how it is governed. The paper will also go into more detail on the Government’s plans for nuclear deployment.

While the Government is ramping up support for established renewable technologies, emerging technologies also form a key part of the NIS.

The Strategy confirms that £1bn will be used to deliver four carbon capture and storage (CCS) clusters by the end of the decade, with two beginning construction by the mid-2020s. As outlined in the ten-point plan, the Government is aiming to capture ten megatonnes of CO2e annually by 2030.

Further details will be released next year, outlining a new revenue mechanism to funnel private investment into CCS projects.

As for hydrogen, the NIS reiterates the establishment of a £240m Net -Zero Hydrogen Fund, that will support both “blue” hydrogen produced through CCS and “green” hydrogen from electrolysis. The Government is targeting 5GW of low-carbon hydrogen production capacity by 2030 – a mix of both blue and green forms – and a Hydrogen Strategy will be launched next year.

Additionally, the NIS confirms that a Net-Zero Innovation Portfolio will enable £200m to be spent on energy innovations in 2020-21.

The government is also commissioning the NIC to undertake a new study looking at Greenhouse Gas Removal technologies, with a report to be published in summer 2021.

Hydrogen and CCS will play a key role in decarbonisation industrial emissions, which account for 25% of the UK’s total emissions.

A £315m Industrial Energy Transformation Fund will support early adoption of energy efficiency and deep decarbonisation projects in energy-intensive industries. An Industrial Decarbonisation Strategy will be published in spring 2021.

The NIS also confirms that a replacement carbon pricing system will deliver free allocation for carbon-intensive industries in a similar fashion to the current European Emissions Trading System (ETS).

Currently, 85% of homes are connected to the gas grid, but the Government notes that these homes will need to stop burning natural gas to reach net-zero. By the 2030s, the UK will have to install 1.7 million new heating systems annually, up from the current 30,000 annual installations.

The NIS confirms that a £320m Heat Networks Investment Project has been issued by the Government. However, the strategy doesn’t give a certain date for introducing the Future Homes Standard – stating it will be issued in “the shortest possible timeframe before 2025”.

The Government is also aiming to deliver 600,000 domestic heat pump installations by 2028 and will invest £81m to create a hydrogen neighbourhood and village.

The NIS notes that the Transport Decarbonisation Plan “will be the biggest piece of work the government has ever done to tackle greenhouse gas emissions from transport”. It will build towards the new 2030 phase-out date for the ban on sales of new petrol and diesel vehicles.

The NIS confirms an accelerated rollout of electric vehicle (EV) charge points. By 2023, the Government “expects to see a high-powered charging hub at every motorway service area, installed by the private sector”.

Additionally, the Spending Review confirmed the government will continue the Plug-in Car, Van, Taxi and Motorcycle Grants until 2022-23. These funds will increase by more than £200m to a total of £582m.

The Spending Review also confirms £120m to deliver 500 zero emission-buses in 2021-22. This builds on up to £50m All-Electric Bus Town projects, which will be confirmed early next year and is expected to create 300 zero-emission buses.

In total, more than £5bn will be spent on public transport and cycling infrastructure, with £1.3bn earmarked for EV charging.

As outlined in the ten-point plan, the NIS confirms £20m for maritime and £21m for aviation to demonstrate and trial alternative low-carbon fuels.

Sunak also confirmed that a new national investment bank will be created and begin operating in Spring 2021. It will be based in the North of England and will fill the role left by the European Investment Bank (EIB) as the UK completes the Brexit process.

Scotland notably opened its own National Investment Bank with a net-zero remit earlier this month. The nation is targeting net-zero by 2045, as recommended by the Committee on Climate Change. The climate requirements of the UK bank have not yet been confirmed.

In an unexpected twist, Sunak additionally launched a £4bn “levelling up” fund, designed to help cities, towns and regions improve infrastructure and skills. Local authorities and Mayors will need to bid for a share of the funding and must receive support from their MP. Once more, the climate requirements are not clear. However, Sunak made reference to the importance of the local low-carbon transition.

“For too long, our funding approach has been complex and ineffective,” Sunak said. He argued that the creation of the fund signals the transition to a “new, holistic, place-based approach”.

A lot has been said about the need to future-proof infrastructure against the impacts of climate change in the long-term and the NIS lays out the first steps to improve in this area.

The NIS largely leans on the 25 Year Environment Plan. The Government is revising the Green Book Supplementary Guidance on Accounting for the Effects of Climate Change to include new information on climate-related assessments.

A key pillar of the NIS is doubling the amount ring-fenced to combat flooding to £5.2bn, which will deliver 2,000 new defence schemes to better protect 336,000 properties over six years. This investment will reduce national flood risk by up to 11% by 2027 helping to avoid £32bn of economic damage, the NIS notes.

The government will also require the water industry to “plan to deliver resilience to a one in 500-year drought” and is also exploring a statutory target to reduce water demand through the Environment Bill.

The NIS has faced a string of delays. Sunak was expected to unveil the policy package at the 2020 Budget back in March, but the Treasury took the decision to delay its release. It claimed, at the time, that the Strategy was aligned with the UK’s old climate change targets and would need to be changed to ensure its compatibility with the 2050 net-zero ambition.

In the months since the Budget was unveiled, the Treasury has received a string of recommendations for the NIS from businesses and green groups.

Organisations including the Aldersgate Group and UK100 have been calling for the creation of a National Investment Bank, arguing that such a move will bridge the financing gap for the projects that are needed to meet net-zero.

The Confederation of British Industry (CBI) recently claimed that the UK Government needs to “undertake a significant programme of infrastructure investment” to enable regulators and private investment to create funding for critical net-zero infrastructure.

Recent analysis from PwC warned that up to £400bn needs to be unlocked and funnelled into green infrastructure by mid-century, if the UK is to meet its climate targets. This calculation takes into account investments from businesses and international bodies as well as local authorities and central government.

Ministers have also faced calls to introduce new climate and environmental requirements around which infrastructure projects receive funding from central government coffers – and which are allowed through the planning process.

In February, the Court of Appeal upheld a challenge from environmental groups regarding the Heathrow Airport expansion. The Court ruled that the expansion, in its planned format, would be illegal on climate grounds. Plans to expand Bristol Airport have also been thrown out on climate grounds this year.

The EIB has confirmed that it will not allocate funding packages to new airports or to projects which expand existing airports. However, motorway building will still be eligible for funding.

For the latest reaction to the NIS and Spending Review, click here.