EXCLUSIVE: Against a backdrop of fires in the Amazon, Timberland's sustainability director Colleen Vien has told edie that fashion brands are not only beginning to face up to their historic role in environmental degradation - but to begin working towards a "net-positive" vision. 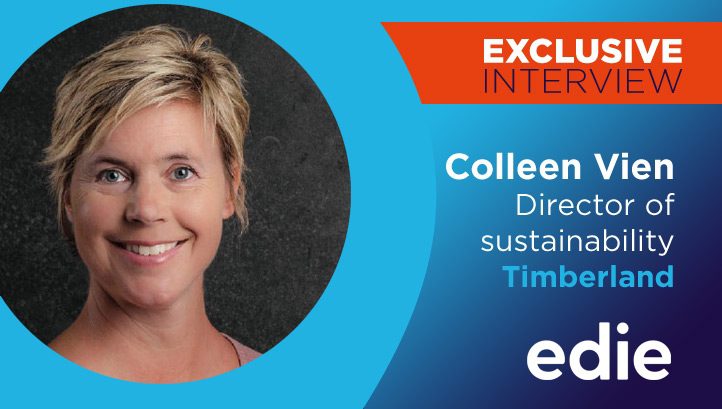 Timberland has been mapping its tree planting since 2001

Brazil’s National Institute for Space Research (INPE) has recorded a total of 72,843 fires in Brazil this year with more than 1.5 football fields of Amazon rainforest are being destroyed per minute – an increase of 80% compared to the same period the year prior.

In response to the issue, policymakers, green campaigners and the general public have been quick to point the finger at (along with Brazilian president Jair Bolsonaro) businesses involved in the cattle, soy, palm oil and textile industries, whose suppliers are believed to have set these fires in order to clear space for production.

Indeed, the fires have led investor network FAIRR to dub cows “the new coal”, and spurred the likes of H&M Group and VF Corporation to suspend their sourcing of leather from Brazil.

For VF Corporation, this new wave of anti-deforestation activism from the public comes at a time when two of its core brands – The North Face and Timberland – are working to incorporate regenerative agricultural processes into their supply chains. The former has already launched a range of “net-positive” wool products, while the latter is due to introduce the first regeneratively produced cotton and leather into products due to go on sale in late 2020.

While some may see the current socio-political climate surrounding materials such as leather as cause to quieten communications around work in this field, Timberland is taking a different stance. The brand this month announced plans to plant 50 million trees over the next five years – up from 10 million trees over the past 18 – and unveiled the first glimpse of its new communications campaign, “Nature Needs Heroes”.

Speaking exclusively to edie, Timberland’s sustainability director Colleen Vien explained that the campaign will feature the true-life stories of grassroots influencers, scientists and innovators working to protect natural habitats and local communities across the world, with the aim of empowering consumers in the face of eco-anxiety.

“While we have been a brand guided by a higher purpose for decades, we haven’t been very bold about our values with our consumer advertising campaign,” she said.

“I really do think consumer awareness is much different now than even three years ago – there’s such a sense of urgency and of personal ownership, which can be seen in how everybody is asking questions.”

Vien puts this shift in awareness down to a “perfect storm” of factors, including new scientific climate research, Greta Thunberg’s School Strikes for Climate Movement and ever-improving green legislation, compounded by the impacts of digitization. And, crucially, she doesn’t believe that it’s a bad thing – even if shoppers are directing anger at industries such as fashion.

“It’s wonderful that we’re now in a place where this kind of messaging is not being forced on consumers, but actually being desired.”

We believe a greener future is a better future. Together, if we make small changes we can make a big impact. Join the movement on September 5th. #NatureNeedsHeroes #Timberland pic.twitter.com/W4K1IGTCLR

Admittedly, this answer may be one you’d expect from a brand that positions “greener world” and “stronger communities” as an equally important business priority to creating “better products”.

But Vien’s welcoming of this new wave of climate and biodiversity activism goes beyond Timberland’s internal interests; she claims it’s a feeling shared across the fashion value chain.

For example, more than 15 retailers and 55 leather suppliers are now members of the Leather Working Group and, as such, have access to the body’s environmental best practice protocol, co-developed by Timberland. Members of the Group also have access to an auditing checklist, scoring and reporting mechanisms, a guidance document and agreed structures for audit visits.

“In the past, the key players in the leather industry may have said ‘we can only influence the environmental and social impact product back to the point at which it becomes a hide’,” Vien explained.

“But there’s now been a turning point, whereby brands across the value chain are realizing that it’s not the meat industry alone that is capable of influencing the way cattle are raised.”

Vien added that she believes more businesses are now leaning towards a triple-bottom-line approach and only investing in products, systems and concepts which are a “win-win-win” for people, planet and profits.

For Timberland, however, audits are not the be-all and end-all of a triple-bottom-line approach. The brand is striving to go beyond compliance and work directly with suppliers to help them produce leather that can be verified as “regenerative”.  Regenerative agricultural practices used at the ranching stage of production capture more carbon in the soil than is emitted into the atmosphere, while increasing soil fertility and improving water-holding capacity.

Vien revealed that leather sourced in this way is set to be used in consumer-facing Timberland goods for the first time in 2020, as part of a limited-edition edit. Explaining the challenges currently holding the firm back from a whole-catalogue rollout of the innovative leather, she cited the two largest factors as helping ranchers to change practices (which, she said, they are keen to do, but which can be time-consuming) and achieving traceability at scale.

Vien added that it was ultimately this lack of “an infrastructure in which there is always robust track-and-trace” which led VF Corporation to pause its sourcing of Brazilian leather – there simply wasn’t enough data being collected to prove it was deforestation-free. The company has been tracking raw materials back to the point of purchase for decades, meaning the challenges in this area now lie in collecting strong data further down the supply chain.

This challenge is clearly one being felt across the wider fashion sector, with numerous companies investing in traceability measures such as digital mapping and blockchain.

At a recent event in London, Fair Fashion Centre’s founder Cara Smyth said that the emergence and upscaling of such technologies, compounded with digitization and higher consumer demands for transparency, are bringing about an era in which fashion brands can no longer “hide” their supply chain and manufacturing practices.

Vien explained that this could only be a good thing, pushing designers and retailers to go further and faster in transforming their supply chains.

“While regenerative agriculture isn’t something that’s currently scaled across our whole business, this is what we are aiming for; we want to be able to say that our business is net-positive by virtue of instilling best practices across our supply chain,” she concluded.

“[The fact that] other brands are also asking how they can play a role in the regenerative agriculture arena… shows that this is an industry now recognizing that there is an alternative path forward and a place for us to take leadership.”