The UK's electricity generation from renewable sources surpassed generation from gas for the first time since records began during the third quarter of 2019, the latest Government figures have shown.

Both onshore and offshore wind experienced sharp upticks in generation, due to both new installed capacity and favourable weather

In its latest renewables update, covering July-September 2019, the Department for Business, Energy and Industrial Strategy (BEIS) reveals that renewable electricity generation during the period was 28.8TWh, compared to 28.6TWh for gas. 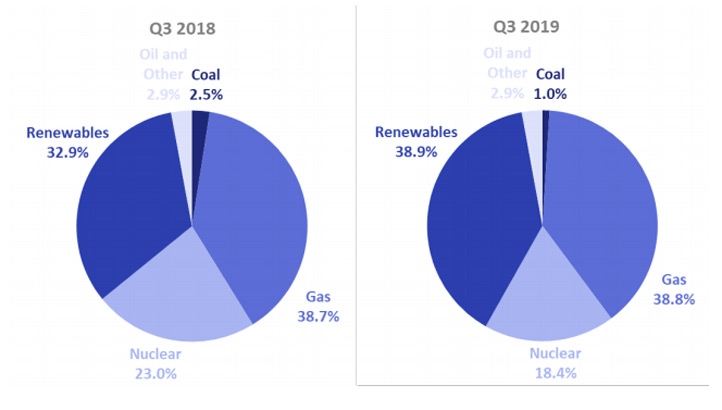 BEIS attributes the success of renewable generation during this period to increased load factors and generation capacity for wind, taking into account both seasonal weather and the initial investments compounded by the Offshore Wind Sector Deal.

Onshore wind experienced a 24% quarter-on-quarter increase in generation and offshore wind saw a 43% increase within the same metrics.

As for consumption outside of the electricity space, the update documents a 29% year-on-year increase in biodiesel consumption in transport. This increase means that liquid biofuels accounted for 5.8% of road transport fuel consumed in the UK during the quarter, compared with 4.9% during the same period in 2018.

On the biofuel piece, the renewables update comes shortly after the UK Government recently launched a consultation on how to make E10 – a lower-carbon fuel mixed with 10% ethanol – to become the standard grade of petrol at UK stations from 2021.

Current petrol grades in the UK already contain up to 5% bioethanol, which is called E5. Integration of E10 petrol would boost the percentage to 10%, but, according to some analyses, may not be compatible with as many as 800,000 older vehicles.

Away from road transport, biofuel is also expected to play a larger role in the UK’s shipping and heating industries going forward, given that the UK's liquefied petroleum gas (LPG) industry has pledged to transition to 100% biofuel by 2040.