Demand for renewables growing quicker than supply in Europe

The growth in demand for renewables across the European market outpaced growth in supply in 2019, according to statistics from the Association of Issuing Bodies (AIB) which hints that the pricing of renewables may need rebalancing if a surplus in production shrinks further.

The AIB statistics found that demand for renewable energy in Europe that is tracked and documented with Guarantees of Origins (GOs) grew at a rate of 11.7% in 2019, an increase of 61TWh from 2018 levels. In comparison, the growth in supply grew by 3.5% last year meaning that the surplus in renewable energy production is starting to shrink.

According to renewable energy solutions provider ECOHZ, the “significantly smaller surplus” could have an impact on pricing for GOs going forward.

“The growth in the supply of renewable energy tracked and documented with GOs during the same period is estimated to only 3.5%, resulting in a significantly smaller surplus in 2019 than in previous years. If the current development extends into 2020, the market will experience a rebalancing. This could have a direct impact on the pricing,” ECOHZ’s managing director Tom Lindberg said. 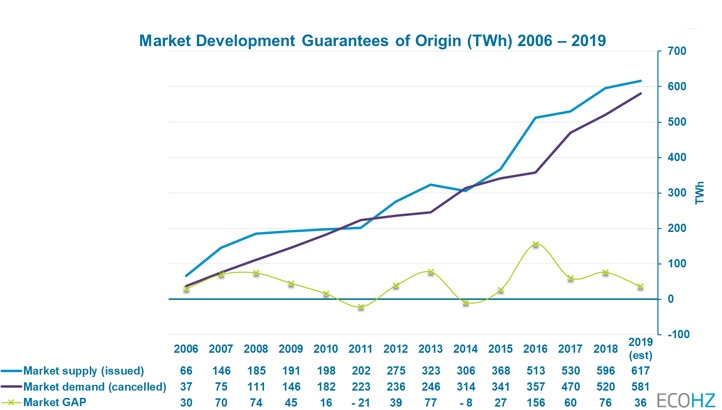 The UK is not a member of the AIB and uses Renewable Energy Guarantees Origin (REGOs) instead. However, the data found that the UK is still impacting the supply and demand balance across the European market.

The UK allows for the import of GOs to the European Energy Certificate System standards (EECS GOs) that are applicable for domestic procurement and usage. According to the AIB, EECS GO demand has grown year-on-year, while exports of REGOs onto the European market are now ramping up, with the export volume at around 20% of the UK’s total import volume. As such, the UK has contributed to the shrinking surplus on the European market

While AIB members use differing reporting schemes, which can skew the statistics, ECOHZ believes the “promising” trend could lead to a “healthy” price market in 2020.

There are, however, some uncertainties that could impact pricing and surpluses going forward. At a corporate level, 2020 targets and commitments to reach 100% renewable electricity is likely to lead to a surge in demand.

Brexit uncertainty also looms over the market predictions, as analysts wait for clarity on UK policy of GO imports and REGO exports.

Businesses obtained 13.4GW of clean energy through power purchase agreements (PPAs) in 2018, more than doubling the record set in the previous year. Companies have signed contracts to purchase more than 32GW of clean power since 2008, an amount comparable to the generation capacity of the Netherlands, with 86% of this activity coming since 2015 and more than 40% in 2018 alone.