Ahead of Wednesday's (11 March) Budget, green groups have put forward their key asks for Chancellor Rishi Sunak. Here, edie rounds up the calls to action - including recent IPPR analysis claiming that £33bn more must be spent annually on decarbonisation to meet the 2050 net-zero target.

Sunak has said that decarbonisation and nature protection will receive headline mentions in this week's Budget - but green groups have urged the Treasury to go further and faster. Image: Rishi Sunak

Before Sajid Javid resigned as Chancellor at last month’s cabinet reshuffle, he had promised a “Green Budget”. His plans were reported to contain extended subsidy and grant packages for individuals and businesses looking to purchase electric vehicles (EVs); new mandatory energy efficiency targets for social housing, schools and hospitals; fresh funding for retrofitting energy efficiency measures and cash incentives for those seeking to remove gas boilers and install rooftop solar on homes.

Javid’s resignations threw certainty around these measures into doubt – but, given that Sunak has experience in both the finance (Goldman Sachs, The Children's Investment Fund Management) and green policy (the Environment, Food and Rural Affairs Select Committee) fields, hope remains that a “green” budget may still come to fruition.

Reaching net zero and ensuring we protect our natural environment. #Budget2020 is four days away. pic.twitter.com/CjJfEHx4rZ

The biggest cause for green economy uncertainty at present is not Sunak’s appointment but the delay to the Government's long-awaited 30-year National Infrastructure Strategy (NIS). It was confirmed late last week that the £100bn plan – which will include long-term plans on climate adaptation and mitigation for all major water, energy and transport infrastructure in the UK – will be pushed back yet again.

Treasury sources claim the delay will help Sunak and his team better align with the UK’s 2050 net-zero target. But with the budget two days away and with COP26 now likely to take place before the NIS is completed, several green groups are voicing concerns that policy action will not be sufficient to upscale domestic net-zero investment holistically, or to urge other nations to follow suit.

Here, edie rounds up the big-ticket items that major players across the UK’s green economy would like to see included in the Budget.

According to new analysis published by the IPPR this weekend, annal central Government funding related to decarbonisation will need to be £33bn higher than current levels of around £17bn through to 2050, if the net-zero target is to be met.

The think-tank outlines how the additional funding could be split to decarbonise transport (£12bn) and the built environment (£10bn), and to create a ‘just transition fund’ in order to ensure that the costs and benefits of decarbonisation are shared fairly across social groups and geographical regions.

In order for the finance to be shifted in this way, the IPPR notes that the Conservative Government will need to change its current fiscal rules, which limit public investment in low-carbon activities to 3% of GDP. A proportion of between 3.5% and 5% would be needed to meet net-zero, the analysis concludes. 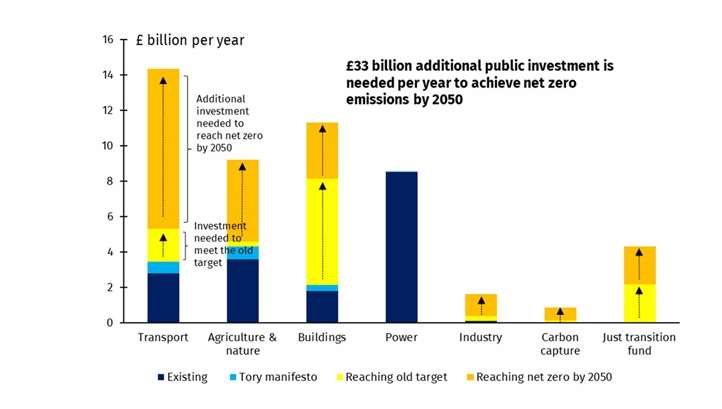 The IPPR is also calling for clarity on an update to the UK’s shorter-term climate targets and would, specifically, like a 2030 target to be confirmed in addition to carbon budgets.

MPs Caroline Lucas and Ed Miliband, who co-chair the IPPR’s Environmental Justice Commission, will be vocally promoting the analysis. They are also notably among the leaders of the political movement for a Green New Deal in the UK.

“This budget will be a litmus test of whether the government understand the climate crisis, and on the basis of the evidence, they are falling terrifyingly short of what is needed,” Lucas said.

“With likely shocks to the economy because of the coronavirus outbreak, and the accelerating climate emergency, investing in a Green New Deal is now more important than ever. It wouldn’t only help us address the climate and nature emergencies, it would transform almost every aspect of our economy and society and deliver on government promises to ‘level up’ the nation by making our economy fairer and fit for the future.”

In a similar vein, Greenpeace is urging Ministers to change fiscal rules so that 5% or more of GDP can be allocated across activities that decarbonise the economy and restore nature.

Such a move should be made with a “clear timeline”, the group has stated – and one which is rapid enough to tackle the twin climate and biodiversity emergencies. On the latter, the UK is set to miss all of its existing nature targets and to take an annual economic hit of at least £16bn through the destruction of natural ecosystems, according to WWF.

Greenpeace has previously written to Boris Johnson, along with the likes of Oxfam and Christian Aid, to urge central Government to invest £2.6bn per year in rewilding projects and other land management schemes, such as the restoration of peatlands and the introduction of regenerative farming practices. The Government’s recent Agriculture Bill and Environment Bill speak to some of these concerns, while the Treasury's inquiry into the value of biodiversity - announced at the 2019 Budget - remains ongoing.

Friends of the Earth: Cuts to roads funding

While many groups have called for more investment in certain areas, Friends of the Earth’s big asks centre around decreasing funding for the UK’s highest-emitting sector: transport.

Transport overtook the power industry as the most emitting sector in 2016, and saw its emissions rise by 2% last year, with the main source of emissions deriving from the use of petrol and diesel for road transport.

Friends of the Earth is, therefore, urging the Treasury to “reconsider support” for its road-building programmes, which received £30bn of funding last year. Head of politics David Timms said moves like this would be “a welcome sign that international climate commitments are being taken more seriously”.

Treasury sources have told the press that a decade of freezes on fuel duty will likely come to an end at this Budget. Moreover, given that the Government has chosen not to challenge a court decision to block the development of a third runway at Heathrow Airport on climate grounds, many are expecting further, similar decisions at this Budget and beyond.

Also calling for an end to Treasury support to high-carbon industries is SolarCentury, which would, specifically, like to see tax breaks for oil and gas majors ended and tougher enforcements for fossil fuel firms which devise business plans to avoid taxation.

The organisation’s chief executive Frans van den Heuvel said that such moves should form “a start” to ensuring that the producers of CO2 emissions pay for the damage that results. Further steps could be a higher price on carbon, for example.

van den Heuvel, like many other green economy figures, is also calling for the Budget to address the UK’s overseas spending on fossil fuels. The recent UK-Africa trade summit made headlines for all the wrong reasons – namely that 90% of the energy deals made during the event were for oil and gas – while the UK’s Export Finance agency spent 96% of its £2.6bn energy budget on fossil fuels between 2013 and 2018.

Regarding the Budget’s domestic energy incentives specifically, van den Heuvel added: “Technological advances have seen the cost of renewables fall dramatically in recent years meaning they can thrive again without the need for Government subsidies. But even if the UK can increase renewable power generation dramatically, the grid is currently not fit for purpose to deal with it.

“The peaks and troughs of renewable energy sources such as solar and wind mean that more intelligent solutions are needed to smooth power generation. Energy storage will be a key part of solving this puzzle so we’d like to see the Government incentivising companies to make rapid strides in this area too.”

The UK Government notably reversed its decision to effectively ban energy storage from competing in the Contracts for Difference (CfD) rounds last week, after consulting last year on alterations to national planning policy around energy storage and renewables. Prior to the consultations, large-scale storage projects with a capacity of 50MW or more were required to pass through the Nationally Significant Infrastructure Projects (NSIP) regime. Now, they can be processed through local planning frameworks, along with smaller developments.