Coca-Cola and Pepsi unite on the road to Paris

With less than a week to go until COP21, global beverage giants Coca-Cola and PepsiCo have thrown their weight behind a business-led push for global leaders to secure a robust international climate agreement in Paris.

An open letter, originally released at the beginning of October, has been signed by CEOs and chief executives from Mars, Nestlé and Unilever’s Paul Polman and, as of today (26 November), 11 other businesses.

Together, the signatories pledge to boost their own sustainability efforts in order to increase carbon reduction and to share innovations and practices to bring about sector wide change.

The letter, coordinated by NGO Ceres, states: “As world leaders convene in Paris you will have an opportunity to take action on climate change that could significantly change our world for the better.”

“Now is the time to meaningfully address the reality of climate change. We are asking you to embrace the opportunity presented to you in Paris, and to come back with a sound agreement, properly financed, that can affect real change.” 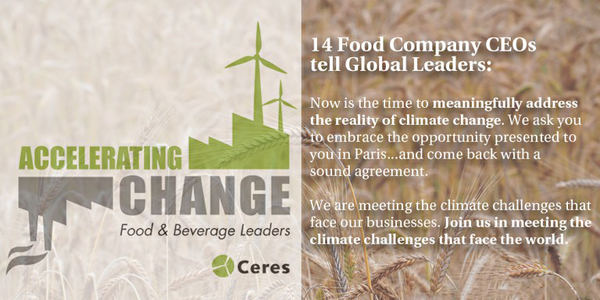 These latest additions to the letter, which includes PepsiCo and Coca-Cola as well as Hershey and the Hain Celestial Group, puts increased spotlight pressure on Paris and comes alongside an announcement that the two beverage giants will be hosting and participating in numerous business forums during the two-week conference.

“We are deeply committed to reducing PepsiCo's environmental footprint and have made significant progress in the last decade. Sustainable agriculture, water stewardship and energy efficiency are pillars of PepsiCo’s long-term growth strategy and we are expanding our efforts around the world."

Coca-Cola also signed that White House pledge and has set its own ambitious targets to halve the carbon footprint of the business by 2020, and ensure that 40% of the PET it uses for plastic bottles is made from recycled or renewable materials by 2020.

Muhtar Kent, chairman and chief executive of the Coca-Cola Company, said: “At Coca-Cola, we are deeply committed to doing our part to address our collective environmental challenges and responsibly manage the planet’s resources.”

“As we face a resource-stressed world with growing global demands on food and water, we must seek solutions that drive mutual benefit for business, communities and nature. Companies who successfully balance social, environmental and economic values will be sustainably successful in the 21st century."

A report released this week has suggested that the current trajectory of the agricultural sector will see it supply 20 of the 23 gigatonne (Gt) annual limit for emission in 2050, leaving just 3 GtCO2e for the rest of the global economy.