CCS projects to capture 28 million tonnes of CO2 this year

The 15 operational carbon capture and storage (CCS) projects worldwide will capture 28 million tonnes of carbon this year alone, a new report from the Global CCS Institute has found.

According to the report, released yesterday (5 November), global CCS schemes will store and capture 40 million tonnes of CO2 a year by 2017, when 22 projects will be online. This has the same reduction effects as removing eight million cars from the road.

The report also states that CO2 reductions could reach 80 million tonnes through CCS alone, but only if the foundations for accelerated deployment of projects is strengthened.

Global CCS Institute’s chief executive Brad Page said: “These major projects show CCS is a proven technology that is reducing CO2 emissions by millions of tonnes in different countries around the world. Now is the time for decision makers to make a renewed commitment to this vital low-carbon technology."

The report highlighted landmark projects in Abu Dhabi, Australia and numerous projects in the US backed by Shell and Toshiba as well as a host of national governments as a sign the CCS industry is gaining momentum. 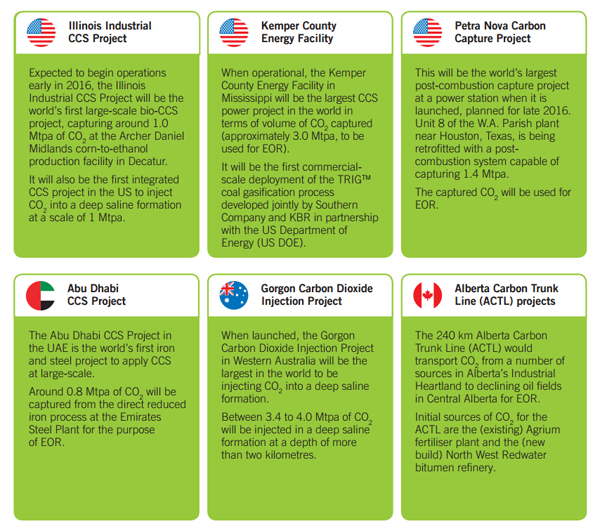 This sentiment is echoed in the IPCC’s Fifth Assessment Synthesis Report which found that most climate models would fail to meet emissions reduction targets without CCS. The report said that without CCS, the cost of mitigation would more than double – rising by an average of 138%.

Global CCS Institute’s report noted that around 11 projects in advanced planning stages were awaiting outcomes on a final investment decision (FID) by the middle of 2016. Two of these are the proposed projects in Peterhead and White Rose which are applying for funding under the UK's £1bn CCS Commercialisation Programme.

Combined, the projects could account for up to 3m tonnes of CO2 reductions in the UK with existing infrastructure providing the necessary means to transport the emissions to offshore gas reservoirs and storage facilities.

According to the report, structural framework is already in place to reduce the running costs of a standard CCS plant. Transformational technologies have been targeted within a 2030 timeframe that will reduce running costs and energy consumption of the projects by 30% against today’s baseline.

Last month, a report from the Chalmers University of Technology in Sweden, found that Europe's energy-intensive industries such as cement and steel are in 'urgent need' of innovative carbon capture and storage (CCS) technology if they are to reach EU-wide emission targets by 2050.