An innovative greywater recycling systems has helped one of Whitbread's newest hotels reduce water use by nearly a quarter in one of the world's highest water consuming countries.

The Premier Inn at the Abu Dhabi International Airport has enlisted the help of specialist water management solutions Waterscan to install Athe region’s first ever water recycling system, which will save an average of 735,000 litres of water each month – almost a quarter of the hotel’s monthly water use.

Matthew Lewis, property development director for Premier Inn Hotels in the Middle East, said: “Reducing our impact on local water supplies and acting sustainably in the areas we operate is a key driver for Premier Inn Hotels and the Whitbread Group. We have worked with Waterscan for a number of years, setting them ambitious targets to achieve our water sustainability goals, which they always find a way of achieving.

“With water scarcity a significant issue in Abu Dhabi, we wanted to take the lead and become the first ever building and the first hotelier to recycle greywater in Abu Dhabi. Our new bespoke greywater recycling system incorporates innovative features to ensure system reliability and guarantees that the customer experience will not be affected.”

Waterscan’s system works by harvesting used water from showering and bathing across the hotel’s 300 rooms and treats it through an ultra-filtration membrane before feeding it back into the hotel for use in flushing toilets and for irrigation.

The process has seen 100% of toilets in the hotel using recycled water with wholescale water consumption reduced by an equivalent of 60 litres per guest.

As well as lowering water demand in the area – Abu Dhabi averages 120mm of rainfall each year, and is likely to suffer from ‘extreme water stress’ within the next 15 years – the system runs on low energy components to deliver increased energy efficiency and lower running costs.

The water recycling system also uses a fixed barrier that nullifies the threats of waterborne viruses and pathogens. Remote diagnostic reporting is also incorporated into the system allowing for around the clock maintenance.

Waterscan’s system is the first of its kind to be approved by the Regulation and Supervision Bureau for the Emirate of Abu Dhabi and is set for roll-out in all Premier Inns across the Middle East. 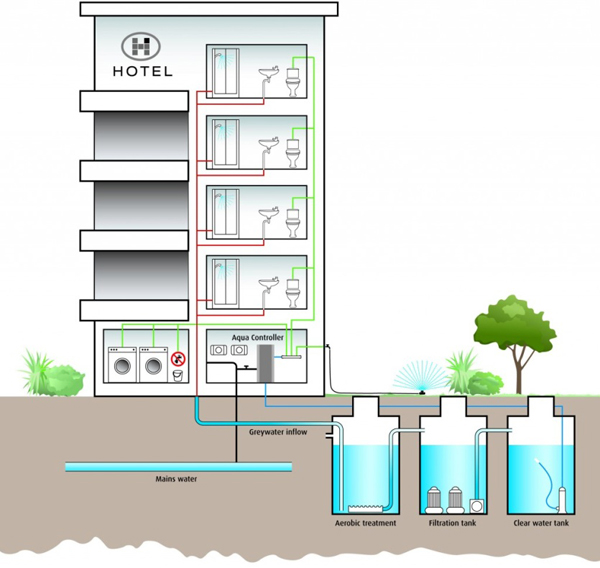 Since 2009, Whitbread has cut carbon intensity by 36%, cut water use by 30%, doubled the amount of renewable energy purchased and diverted 84% of all waste away from landfill.

New plans were announced earlier last year to reduce carbon by a further 15% and water by 20% against a 2014 baseline, while bumping recycling rates to 80%.

Earlier this week (4 January), the London Heathrow Marriott hotel announced it had successfully trialled a new pot-washing technology in its kitchens that cut water use by almost 92% - saving around two million litres of water a year.