Telecoms giant BT has released its 2014/15 progress report, revealing a 34% year-on-year cut in waste-to-landfill, a 12% cut in UK water use and a 4% cut in energy consumption.

The headline figure of the report is a one-third reduction in the amount of waste being sent to landfill. In 2014/15 BT recovered or recycled 98% of UK waste, remaining on track to reach 100% by next year.

The progress report said: “This year, we held ‘Slam Dunk Junk’ events to encourage people to dispose of their waste in the correct bins. These messages are reinforced by our internal ‘What waste where’ website and new signs on rubbish bins.” 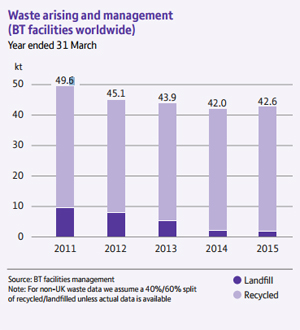 Water use also saw a precipitous drop, reportedly driven by a proactive detection of water leaks, which saved around 150,000 cubic metres of water.

Looking forward, the company is installing half-hourly water meters that will cover half of total water use in the UK.

“The new meters will give us a more accurate understanding of how we use water, helping us spot leaks more quickly,” said the company report.  “We estimate this will help us cut water use by 2% by the end of 2015/16.” 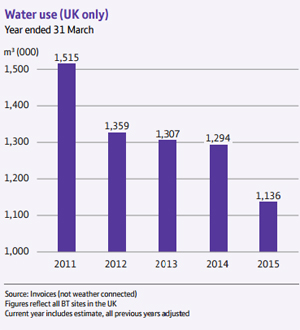 The firm also installed 5,600 LED lights, many with sensors to reduce the amount of time lighting is left on unnecessarily

BT has also carried out a series of initiatives to engage employees with energy saving. The company claims that 85% of its employees say that they take action to reduce BT’s environmental impacts.

BT already sources 100% renewable electricity from the grid in the UK, buying it directly from solar and wind power generation plants through Power Purchase Agreements (PPAs).

These initiatives led to a small reduction in UK emissions for the sixth straight year. 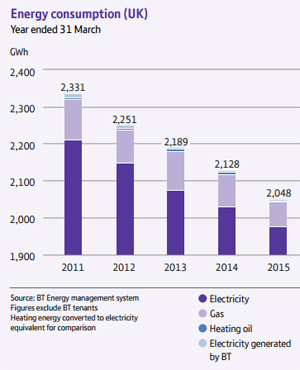 The report also reflected on BT’s 3:1 initiative, which was launched in 2013.

The campaign aims to help customers reduce their emissions by three times as much as all of BT’s end-to-end carbon emissions, by 2020.

BT said: “Our products and services can help customers reduce their carbon emissions, save money, and use fewer resources, for example through conferencing facilities that reduce the need for travel.

“BT serves some of the biggest companies in the world, so helping them reduce carbon emissions can have a global impact.”

For example, the company claims high-speed fibre broadband makes it easier for businesses to use cloud-based IT services like email, document storage and accounting. “Doing this online instead of using physical alternatives or a central IT system helps businesses cut costs and carbon emissions”.