The world's largest beverage company has released its 2014/15 sustainability report, revealing a 10% improvement in water efficiency, but a slowdown in emissions reductions.

Since 2010, Coca-Cola has improved its water efficiency by 10%

The report, predictably for a company that used 304 billion litres of water in 2014, is focused on water stewardship, which Coca-Cola describes as being vital for business resiliency.

The progress was driven by “significant investments" in new technologies and operating procedures in the manufacturing process.

Coca-Cola also found that 80% of their product’s water footprint came from the agricultural supply chain, so has partnered with WWF and other charities to find ways to reduce these impacts.

The soft-drink giant has previously been the target of activist campaigns which claimed that the company's use of water in developing countries was 'highly unsustainable'.

However Coca-Cola has helped quieten those accusations with better-than-expected progress on its goal to replenish the same amount of water as its final drinks sales volume. In 2014, it replenished 94% of this volume, up from 68% last year. 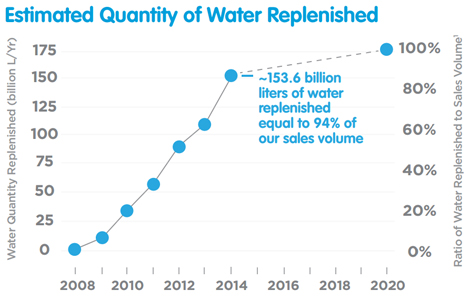 The company admitted it was ‘off track’ on key emissions targets, including its pledge to grow the business but not carbon emissions from global manufacturing.

Global manufacturing emissions in 2014 were an estimated 5.55 million metric tons: 21% lower than the business-as-usual forecast but 16% higher than the 2004 baseline.

Coca-Cola also reported that around 48% of the bottles and cans it sent to market were being recovered and recycled, putting it on track to meet a 2015 target of 50%.

However it was less than halfway towards reaching another 2015 target to source 25% of the PET plastic for its bottles from recycled or renewable material.

The report claimed that one of the reasons for the slow progress was the drop in the price of crude oil, a main ingredient in PET, which reduced the cost of producing virgin PET and increased the relative cost recycled PET.

Coca-Cola chief executive Muhtar Kent said the missed targets were a results of the corporation's ambitious goals. He said: “As an industry leader, we often choose to set demanding targets that drive fundamental change, even while understanding that attaining such goals is not guaranteed. For example, we committed our system to work toward buying and installing only HFC-free coolers by 2015.

"While we’ve led the industry and placed more than 1.4 million such coolers in the market—including approximately 297,500 in 2014—we are off track to reach this goal. Sourcing HFC-free coolers presents challenges in many markets, but we continue to make progress, having invested more than $100 million over the past decade to make our coolers more environmentally friendly.

“Overall, we are pleased—but not satisfied—with our sustainability progress and the milestones we’ve reached.

"As we advance our reporting and disclosures, we continue to support and measure our sustainability progress against the principles outlined in the United Nations Global Compact. For this year and beyond, we’re committed to building on the successes of 2014, further integrating sustainability into our business and gaining fresh momentum.”