Both the public and private sectors need to realise there is no 'silver bullet' to deal with the rising yet largely ignored water scarcity crisis, a panel of industry experts has concluded.

Water is a forgotten factor of production...the primary challenge is therefore to make the forgotten unforgettable

Representatives of NGOs and large corporations including the Word Water Council, the World Bank, General Mills, SAB Miller and EDF all voiced their concerns during the FT Water Summit in London yesterday (27 October).

One panel discussion highlighted the need for businesses to take the initiative and collaborate with one another to find solutions to the growing water scarcity problems, with panelists agreeing that the private sector "is no longer viewed as the evil" but as "part of the solution" to climate change.

SABMiller’s director of sustainable development Anna Swaithes said: “We need partnerships with purpose. The right partnerships, at scale, with partners who share our objectives we need to manage water as an economic enabler. Addressing water stresses is a financial and moral imperative for business. We believe water scarcity is holding back prosperity, and private sector can unlock prosperity.”

As the world’s second-largest brewer, SABMiller recently set itself the target of improving water efficiency to three litres of water per litre of beer and 1.8 litres of water per soft drink. The brewer's previous water achievements include a 25% reduction in water use against a 2008 baseline. Yet the company has realised that, while it can continue impriving its own operations, an industry-wide collaboration is needed.

“Water limits business potentials from the smallest farms to the multi nationals and we’ve come to believe here that we share a responsibility with other users to really understand and manage resources," Swaithes added. "We need to understand the realities about local access to clean water resource and if we don’t do this we’ll put our business at serious risk.”

Another key discussion point at the Water Summit was the adverse yet unpredictable effects that climate change is beginning to have on the world’s water supplies. The droughts in California, for example, have wreaked havoc for companies submerged in the agricultural sector, such as General Mills. The US food giant had previously pledged to reduce GHG emissions by 28% by 2025 and be 'fully sustainable' by 2050, but the California drought has seen the firm's supply costs rise significantly.

General Mills’ executive vice president of supply chain John Church said: “A lot of our water footprint is outside our walls, in agriculture, so for all the work we do looking at soil conservation, we look at water usage as well - it’s not a trade-off. We promote good farming practices and good agriculture, sharing the best practices is the best solution for all industries.”

To mitigate the problem, General Mills is currently working on ways to improve water efficiency in these water-stressed areas. Plans are being drawn up to allow almond fields in California to be flooded so that the soil would work as storage for water as well as crop fields, while in Western China, General Mills has implemented storage systems so that farmers can spend more time on crops than travelling miles to collect water from local sources.

General Mills ranked third among the packaged food industry in a ceres report which assessed firms' water risk management abilities. “There’s a need for us to continue to invest in new infrastructure," Church added. "We’ve been around for 149 years and we want to be around for another 149 years in order to do that we have to start work now.” 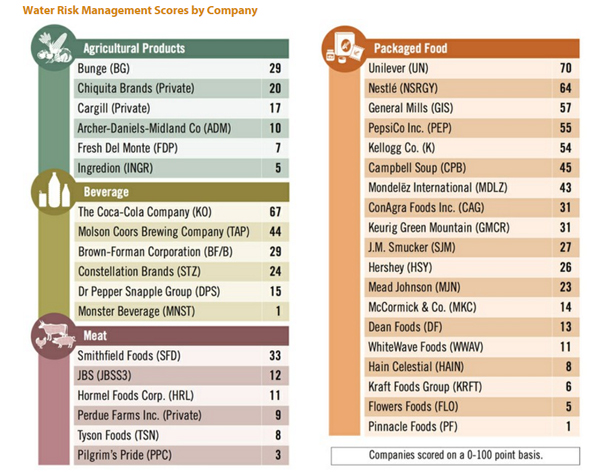 Giving a broader overview of the issue, the World Water Council’s secretary for sanitation and water resources Benedito Braga, who opened the FT Water Summit, said: “Water is the most precious natural source and is under pressure from global populations and global demand which is being exasperated by climate change.

“The World Water Council is working with the World Bank to push water higher on the agenda in Paris in December. But $500bn to $1trn will be necessary to solve the access problems to drinking and sanitation water around the world.”

Ben Braga opening at #FTWater: better water management can be a means to make the world better! #worldwatercouncil pic.twitter.com/PrxeOKBtxP

Yesterday's event also pointed to the lack of awareness and urgency over the water crisis. In the latest draft text for the upcoming climate change talks in Paris, water isn’t mentioned once.

“Water is a forgotten factor of production," said the World Bank Group’s senior director for water Junaid Ahmad. "The primary challenge is therefore to make the forgotten unforgettable.”

Back in August, the World Resources Institute published data that suggested that by 2040 nearly a fifth of the world’s countries - with the majority located in the Middle East - would be exposed to 'extreme water stress'. Another recent report, which mapped 500 large cities to determine how global urbanisation is affecting water supplies, concluded that London has emerged as one of the most water-stressed cities in the world.